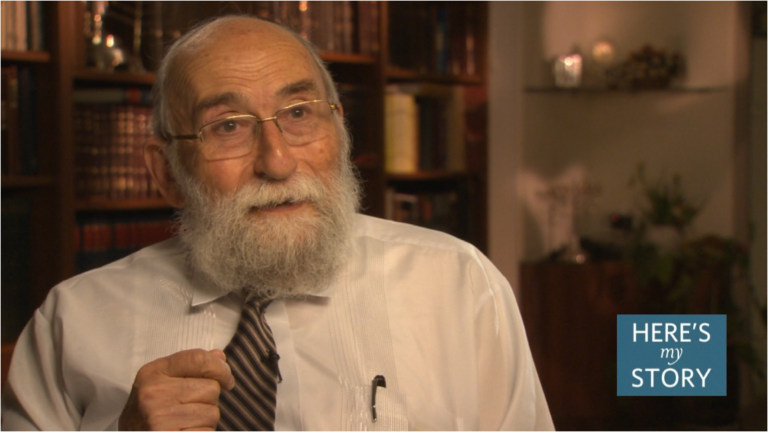 After I completed my service with the IDF, I was working as a news editor for Shearim, the newspaper of the Poalei Agudat Yisrael political party. During this time, I was undergoing a spiritual search and, living in Bnei Brak, I saw different streams of Judaism being practiced all around me. I visited various chasidic courts, but didn’t feel a sense of belonging.

Then I chanced upon Chabad. I started learning the Tanya, the seminal work of Rabbi Schneur Zalman of Liadi, the 18th century founder of the Chabad Movement; I also  wrote letters to the Rebbe and I was privileged to receive his personal responses.

In 1960, I met the Rebbe for the first time when I traveled to New York with a group of Israelis who wanted to spend the High Holidays in 770. And then a whole new world opened up for me.

My first private audience took place upon my arrival. My appointment was for 2:30 a.m., but I had a very long wait and was only admitted into his study at 8:00 a.m. By then, the Rebbe had been receiving people for twelve consecutive hours, without even taking a short break, not even a coffee, but he still looked completely alert, and gave me twenty minutes of his time, which I found incredible.

As was customary, I handed the Rebbe a note in which I listed my questions and requests, but the Rebbe did not confine himself to these alone. He took me completely by surprise by asking how my beard was doing.

Two years earlier, the hairs of my beard started falling out and the issue was resolved by electric pulse treatment. Although I had corresponded with the Rebbe about the matter at the time, I was shocked that he managed to remember this so much later. I myself had already forgotten about the whole thing!

Then the Rebbe asked about my journalistic work and expressed the expectation that I would use my position to spread Judaism, especially chasidic teachings – “until they reach the most distant places,” he stressed.

I really liked his approach which was so different from that of many others in the religious world. In my opinion, too many Jewish streams were concerned only with the needs of their immediate communities, while the Rebbe didn’t give up on any Jew no matter how distant his or her place was from Judaism. His perspective was that there is no such thing as “religious” or “secular” Jews. “No matter where they find themselves,” he said, “we must help to bring them close.”

Throughout the years, I was privileged to visit the Rebbe many more times, one of the most special being my trip for Simchat Torah of 1975. On that occasion, one of the other visitors was the Israeli Supreme Court judge, Chaim Cohen, who had been brought up Torah observant but at this time was known as a frequent opponent of Orthodox Jewry. The Rebbe showed him special consideration, bringing him up to the podium and honoring him with a hakafah, a dance with the Torah. The chasidim handed him a Torah scroll which was especially heavy, and the Rebbe asked him in Yiddish if he was willing to halten der Torah, which means “hold the Torah”  – but also can mean “uphold the Torah.” Cohen became very emotional, and he answered “yes.” He danced with the Torah, and there was indescribable joy present.

After Simchat Torah was over, I asked Rabbi Yudel Krinsky, one of the Rebbe’s secretaries, if I could use his phone to call my new employer in Israel, the Maariv newspaper, to dictate a report of what I had witnessed. Rabbi Krinsky agreed, and I composed an article about Judge Chaim Cohen dancing with the Torah.

Three days later I was told that the Rebbe wanted to speak with me. I admit that I was scared at first. Did I do something wrong? I wondered. I entered the Rebbe’s study to find him sitting at his desk with a copy of Maariv spread out before him. “Yasher koach!” he said, congratulating me. At that I calmed down and my feelings of trepidation were replaced by happiness that this was the reason the Rebbe called me in.

Then the Rebbe opened a drawer in his desk and took out a bottle of mashke (interestingly, he told me that it should be called mashke instead of vodka), as well as a wad of dollar bills. He said to distribute these to the people at Maariv, so that they should make a l’chaim and donate the dollars or their equivalent to charity. This seemed like an extraordinary gesture and I became very emotional. After I left his study, I counted the bills and it turned out that there were forty-eight dollars. But then I realized that I faced a dilemma: Who was to receive these dollars from the Rebbe? If he wanted me to give them just to the reporters, then he had given me too many dollars, but if he wanted all the employees of Maariv to receive a dollar, then he had given me too few.

I explained this dilemma to Rabbi Binyomin Klein, another one of the Rebbe’s secretaries, who informed the Rebbe and came back with another bundle of dollars telling me to distribute to everyone – quoting the words of Moses in the Book of Deuteronomy – “from your woodcutters to your water carriers.” I understood that I should distribute the dollars to the entire staff – reporters, clerks, drivers, management workers, etc.

I now had over two hundred dollars, and the Rebbe said I should find out exactly how many employees there were, and if I needed more dollars, he would send whatever amount was missing.

After I got back to Israel, I approached the editor-in-chief, Shalom Rosenfeld, and I related to him what had happened. It turned out that, at the time, Maariv employed four hundred and thirty people, including those working in the branch offices in Jerusalem and Tiberius.

But there was a problem. During that period, foreign currencies were closely monitored in Israel and, according to law, citizens were prohibited from possessing any dollars at all, no matter if it was a one-hundred-dollar bill or a one-dollar bill. Mr. Rosenfeld suggested that I write a letter to the ministry of finance, explaining the background of these dollars and asking for special permission. “If you receive permission,” he promised, “I’ll help you with the technical aspect of distributing the dollars.”

I wrote the letter and, within ten days, an official answer from the ministry of finance arrived, stating “Permission is hereby granted to Mr. Naftali Kraus who brought dollars from the Lubavitcher Rebbe to give every employee of Maariv a one-dollar bill.”

I photocopied the letter of permission and hung it on the notice board. The next thing I knew a line had formed in front of my office as all the employees, except for four people, came to receive a dollar from the Rebbe and to make a l’chaim. To my knowledge, each of the individuals kept the dollar sent by the Rebbe, and gave a replacement to charity.

In the years that followed, guys kept coming to me to say how their dollar from the Rebbe gave them strength and encouragement during difficult times. They treasured these dollars very much, and in this way, the Rebbe’s dollars for charity, spread out ripples for years after.

Rabbi Naftali Kraus (1932-2018) was an Israeli journalist who authored many books in Hebrew and in Hungarian. He was interviewed in his home in Rechovot in May of 2010.