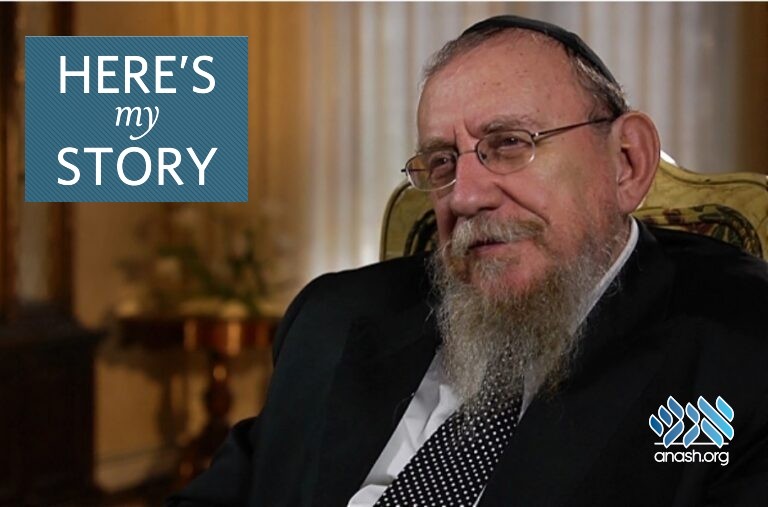 Rabbi Mosher Lazar, Shliach to Milan, Italy, tells of the personal attention the Rebbe gave to each one of the students at 770, and the Rebbe’s bracha that holds strong till today.

Rabbi Mosher Lazar has served as a Chabad emissary in Milan, Italy, since 1960. He was interviewed in June of 2011.

I was twelve years old when I enrolled in the Chabad yeshivah in Crown Heights together with my brother. Our family had escaped from Vienna before the start of World War Two, and although there were plenty of yeshivahs near our home in Williamsburg, we gravitated to Chasidic teachings. In Chabad, we found our spiritual home and our spiritual father, the Rebbe.

My first major impression of him goes back to Rosh Hashanah of 1951. When the Rebbe’s farbrengen ended at the holiday’s conclusion, he recited the blessing after eating and then started to distribute wine from his cup. Although the Previous Rebbe had also distributed wine from his cup in a ceremony known as kos shel brachah, this was the first time the Rebbe — who had accepted leadership of Chabad earlier that year — personally gave wine to everyone, not just to important people. Each of us went up to get some wine, and the Rebbe said a few words to every person.

I went up also, and even though I was just a teenager, I found this encounter with the Rebbe to be highly meaningful. The words he chose to speak to me were very personal — they were not just standard platitudes but a message pinpointed directly at me. In that moment I knew that I was standing in front of someone most unusual, whom I came to call my “father.”

Just to give a small example: As a teenager, I was quite handy, and I did odd jobs such as building bunks for summer camp and reinforcing the wooden benches that were used for the farbrengens at 770. In the later years, they had iron supports, but back then they were made of wood. After a few farbrengens, they would start to become loose and wobbly, and sometimes I would be asked to repair them.

I’d bring a saw, a hammer and some nails, I’d go into the shalash — 770’s side yard where a tent was set up back then — and I’d start working. One day, as I was in the midst of hammering, I looked up and was startled to find the Rebbe standing there, watching me with a big smile on his face. He said, “It’s cold, why don’t you have your jacket on?”

As time went on, I learned that the Rebbe took a personal interest in every yeshivah student. If we had any problems — no matter how insignificant — we could write a note to him, and he answered each of our stupid little questions. (Like, “Should I get a driver’s license?”)

In addition, each of us received personal, individualized advice from the Rebbe on an ongoing basis. Generally, we heard that advice from our teachers, but now I understand that it was actually coming directly from the Rebbe who discussed each of the students with the yeshivah administration in monthly meetings. He knew all about us and he kept up with our progress.

As I got older, I began thinking it might be time to get married. When I went for my annual audience with the Rebbe — on the occasion of my birthday, as was the custom in those years — I didn’t even have to bring this issue up. The Rebbe did it first, telling me, “You know, Moshe, it’s time for you to start looking for a marriage match.” The Rebbe was up-to-date on my situation.

When I got my rabbinic ordination in 1958, my parents wanted me to begin earning a living. They were worried that I would sit in yeshivah my whole life, and they went to speak with the Rebbe about it. Although neither of my parents was Chasidic, they felt very comfortable with the Rebbe because he spoke perfect German — having studied at the University of Berlin — and he spoke to them as no one else could.

He gave them his blessing, promising that I would find a good marriage match and that I won’t ever have any financial problems. He knew how to speak to their hearts — to the heart of my mother in particular. Like any other Yiddishe Mamme, she was worried about her child, but the rebbe knew how to allay her fears.

He told her, naming a wealthy family in Williamsburg, “He will marry into a family like that and he won’t have to be concerned about money.” She heard that and was satisfied. And in fact, that is what happened. In all the years that I was working as a Chabad emissary in Milan, Italy, I never struggled to make ends meet.

Of course, my parents invited the Rebbe to officiate at my wedding — which took place in March of 1960 — but he declined. My mother, not being shy, asked, “Why not? Moshe is so active in Chabad; he does so many things; he even built a whole library at the yeshivah!” She felt I somehow deserved it.

At that, the Rebbe smiled and said, “Yes, I know. But now there is a new order of things, and I cannot officiate at weddings anymore. But rest assured that I will be there in spirit.”

It was hard for me to accept this, but I was not the first yeshivah student at whose wedding the Rebbe declined to officiate. I was the second, so word had already gone out that the Rebbe was cutting down on his appearances. But it still was a big disappointment. I had to content myself with his promise that he would be thinking of me on that day.

Looking back on it, I should not have been disappointed because the Rebbe’s care for his chasidim was constantly made evident in a myriad of ways.

After I had already been sent as a Chabad emissary to Milan, I returned with my wife and baby for a visit to New York. My in-laws picked us up and we went to their house to get something to eat and then I went on to 770 where a farbrengen was in progress. When I walked in the door, I immediately heard, “Where were you? The Rebbe asked about you three times already!”

So this is why I consider the Rebbe my spiritual father.

I would just like to add that people don’t realize how humble the Rebbe was. He never wanted to impress us with his greatness — on the contrary, he wanted us, his children, to realize our own greatness. And he succeeded brilliantly with all his young followers, who today run some of the largest and most influential Jewish outreach organizations in the world.

How did that come to be? We had no special qualities, but the Rebbe formed us, little by little, with superhuman patience. He took each and every one of us and helped us discover our G-d-given talents and our mission in life. He helped us find our own greatness.