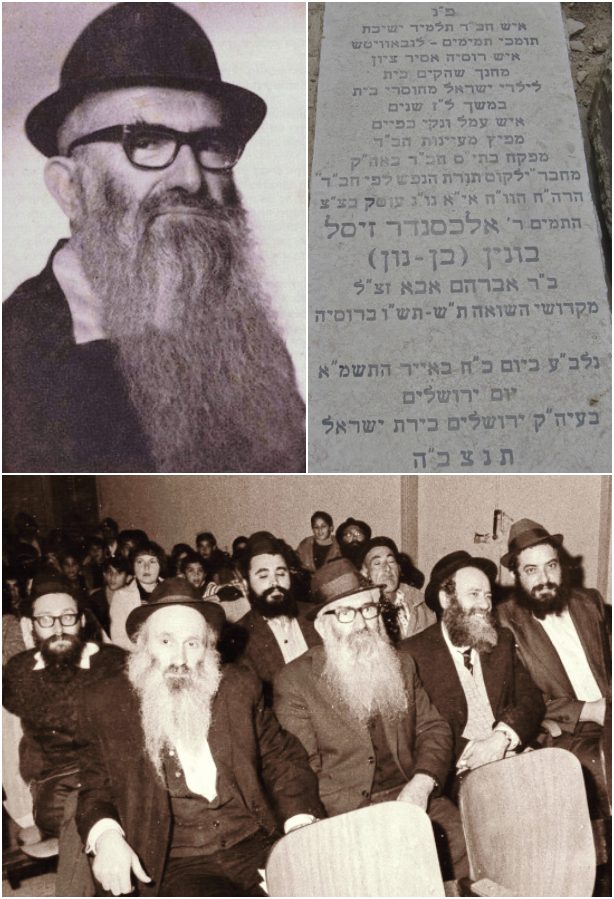 In a heartfelt letter, R. Alexander Zissel Bunin-Ben Nun pleads with R. Mendel Futerfas to give him some time to answer his questions in Chassidus. Marking R. Alexander Ben Nun’s 40th Yahrtzeit.

R. Alexander Zissel Bunin-Ben Nun was born in Klimovitch in 5671/1911, and as a bochur he learned in the yeshiva in Nevel under his uncle, Reb Yisroel Levin “Nevler” (his mother and Reb Yisroel’s wife were sisters). In 5687/1927, he spent half a year in Yaketrineslav, where he spent time in the home of Reb Levik, the Rebbe’s father, where he heard stories from Rebbetzin Chana and met the Rebbe.

Soon after his marriage, he was arrested by the KGB and exiled to Siberia for four years. After being released, he settled in Moscow and worked as a shochet.

In 5693/1933, R. Alexander moved to Eretz Yisroel and settled in Raanana, where he opened a boarding school for homeless children with support from the Rebbe. In 5720/1960, he was appointed by the Rebbe to be the head supervisor of the Reshet network of Chabad schools in Eretz Yisroel. He published a book on human psychology as explained in the maamorim of the Frierdiker Rebbe.

In the following letter, written before Chanukah 5735/1975, he asks the mashpia of the yeshiva in Kfar Chabad, Reb Mendel Futerfas, to meet with him and answer all his questions in Chassidus.

Reb Alexander writes how he learns Chassidus daily, “of course,” and over time he has accumulated many questions and difficulties which he wanted Reb Mendel to resolve. In doing so, he sought to continue his tradition of annual meetings with the mashpia R’ Shlomo Chaim Kesselman who had since passed away.

Rabbi Ben-Nun concludes his letter in poetic style and compares himself to “a burnt-face fisherman sitting in an old-fashioned and rusty wooden boat, but in his eyes a glimmer of hope and a desire to reach his destination.”

“Please pay attention to one of these fishermen who writes and knocks on the gates of Chabad,” the author concludes in his request to Reb Mendel.

This writer, my dear friend, is a student of Tomchei Temimim, Alexander Zissel Ben-Nun, who lives in Raanana for 35 years, when I was sent by the Rebbe to serve as the director and educator of an institution for children of poverty and distress, especially from Arab lands.

And I have a wish and request:

In my solitude in Raanana, I study Chassidut and Tanya every day, of course, and I have accumulated many questions of a simpleton (“prustak“) in Tanya.

I therefore asks you, my teacher and mentor, to set aside for me two or three hours during Chanukah and answer my questions and matters of difficulty in Tanya.

Now, of course, I have no questions on Tanya ch”v, but rather questions in Tanya. I remember that when I was by my uncle R. Yisroel Levin “Nevler” in 5684 he told us – as usual, with liveliness and exciting and fascinating gestures – what is the difference between a chossid who learns Gemara and doesn’t understand and a misnaged:

So I have questions in Tanya, and you Reb Mendel, our dear and the chosen one of our heart, please enlighten my eyes in Tanya.

I will mention that my first mashpia in Chassidus was R. Moshe Dubinsky, then R. Yisroel [Levin Nevler], and especially R. Shlomo Chaim, who until the days of his final illness we would meet three times a year, to show him the letters I had written to the Rebbe and the letters I received in response. So please accept me, too, the simpleton “prustak” as one of your students and recipients of your influence, since you are the mashpia for all students of Tomchei Temimim.

I apologize for me, an “ordinary Yid,” harassing and taking up your time. However, at the port, there arrive huge ships, sophisticated and magnificent luxury ships that princes and kings and powers of the world enter with them to the port. Yet, between these huge ships there sometimes rushes old and rotted wooden boats, black and covered with rust and mold, carrying fishermen and sailors who are faces are burnt by the sun and wrinkled from suffering, grief, and exhausting effort, their hands are tough and corned, but in their eyes, there is a gleam of hope, effort and striving to reach their destination and goal. Please pay attention to one of these fishermen who writes and knocks on the gates of Chabad.

With Heaven’s aid, I will arrive at the yeshiva on Monday or Tuesday of Hanukkah, the first or second light.

With the friendship of a student of Tomchei Temimim,