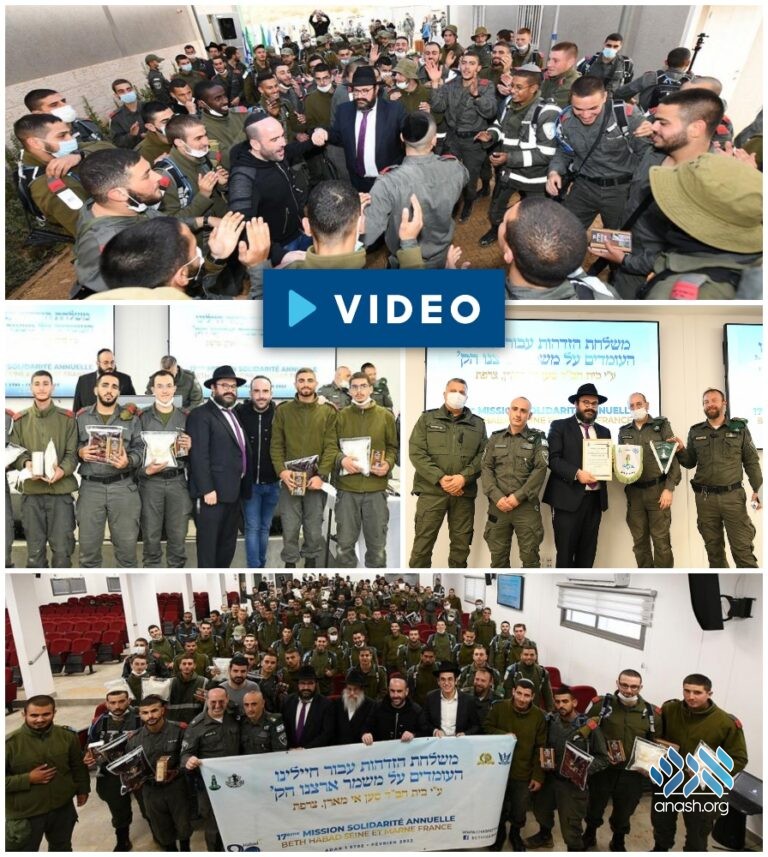 Following a tradition of 16 years, Chabad of Seine et Marne, France gifted Tefillin and Shabbos candlesticks to hundreds of IDF soldiers, offering them a spiritual protection to enhance their physical one.

For the 17th time, and despite lingering covid restrictions, Chabad of Seine et Marne, France gifted Tefillin and Shabbos candlesticks to hundreds of IDF soldiers in two moving ceremonies at IDF bases.

Chabad of Seine-et-Marne, located in the 77th district of France, is headed by Rabbi Yossi and Tzalcha Amar. Chabad 77, as they are known, has a unique and special tradition of giving Tefillin and candlesticks to IDF soldiers.

This year, too, despite the corona restrictions in Israel and around the world, Chabad 77 did not give up on the special tradition.

On Sunday, a moving and very impressive ceremony was held at two IDF bases, one in Michmash and the other in Chevron, where the soldiers received Tefillin, candlesticks and Sifrei Chitas for protection. This year’s event was dedicated in honor of the Rebbe’s 120th birthday.

It is the 17th time in a row that Chabad 77 presented the unique gifts to IDF soldiers, to thank and honor their work to preserve Eretz Yisroel’s security.

The event was attended by soldiers from different units, who each expressed their gratitude that they now have their own tefillin, and will now be able to don them as needed.

During the two events 64 pairs of Tefillin, 240 Chitas and 60 candlesticks were distributed to the IDF soldiers, followed by a screening of JEM’s film ‘Armed’ on the importance of the Tefilin campaign particularly for the IDF. Over three hundred soldiers watched the presentation, which was created, as every JEM production, thanks to the hard work and dedication of Rabbi Elkana Shmotkin.

When addressing the IDF soldiers, Rabbi Yossi Amar shared a letter of the Rebbe from 1975 to a commandant of the IDF, with a special connection between the IDF & Purim.

The soldiers enjoyed a large catered meal, followed by singing and dancing, thanking Hashem for the miracles and wonders experienced last year.