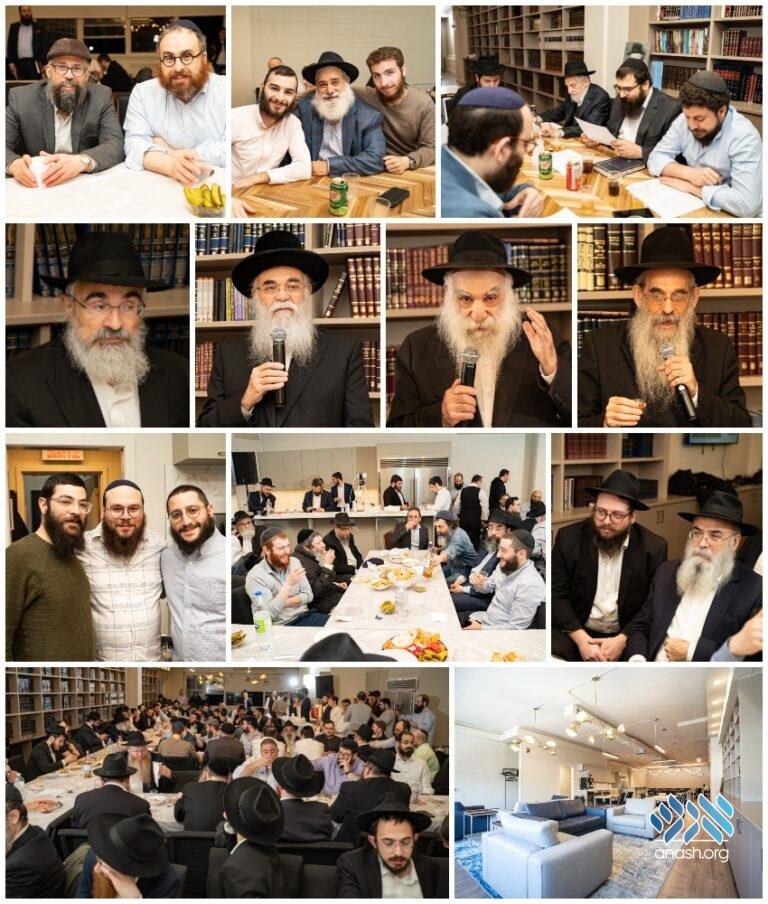 A humble vision for a simple place for Yungerleit to learn and Farbreng quickly and naturally developed into something much greater; a new pulse and energy for the Montreal community.

Montreal’s Lubavitch community is Baruch Hashem thriving, with no lack of Shuls, schools, Kosher restaurants, and other aspects pertaining to a flourishing Jewish community.

In this booming city, the number of newly wedded couples and young families seeking to establish their families has seen exponential growth in recent years. However, with that growth, a particular gap became more evident.

There was no dedicated space for the younger part of the community to learn, Farbreng, have Shiurim and Chavrusas, or special programs relating to the Jewish calendar.

A big part of the Yungerleit felt like there was no place and a need to establish a place within the community where they could gain inspiration g feel completely comfortable ––b’Gashmius ub’Ruchnius–– establishing a house of learning and spiritual growth. A place with dedicated leadership, consistency, and an emphasis on community.

A New Era for Montreal is Born.

The vision of building an establishment started to take form and quickly turned into a buzz amongst the younger community of Montreal. With the confident approval and mentorship of the head Shliach Rabbi Berel Mockin, a board of Yungerleit was established – spearheaded by the newly appointed Rabbi, Rabbi Shmuel Shuchat.

Wanting to take immediate action to bring this vision into reality, Rabbi Shuchat and this dedicated group of young men planned a launch Farbrengen in honor of Gimmel Tammuz 5781. They brought in the Shliach R’ Levi Jacobson from Toronto to lead this auspicious Farbrengen.

The evening was a smashing success, with over 100 young men turning up to show their support and readiness to build a future for their community. Throughout the night, many inspired individuals pledged to roll up their sleeves and help build this new establishment that will serve the Montreal community for many years to come. serve as the foundation for our community’s longevity.

It was clear that the first step of this journey was to find a dedicated space to serve as the home of this organization. A place that was local, comfortable, and welcoming for anyone willing to partake.

Soon enough, with major Hashgacha Pratis, a space was found and a lease was signed. A small ballroom above The Chai Centre which served as the “Chai Cafe” in the past, was now the new home of Yagdil Torah.

After signing the lease, orders for Seforim were placed with abundance, ensuring the shelves of Yagdil Torah were stocked with a full range of Seforim (Nigleh, and Chassidus, and English selections,) to serve the attendees.

With a place, shelves of Seforim, and an eager crowd, Yagdil Torah started to unfold naturally. A WhatsApp group of nearly 180 participants was formed, and Chavrusas and Kviusim were established by the dozens.

Naturally Unfolding into Something More.

It wasn’t long before official Shiurim were being given regularly. With the participation of the Rov, Rabbi Berel Bell, who gave a weekly halacha class, and several Mashpi’m started booking weekly slots to accommodate this new, fast-growing community of young men committed to adding in learning, Farbrenging, and communal growth into their lives.

And soon enough, a humble vision for a simple place for Yungerleit to learn and Farbreng quickly and naturally developed into something much greater; a new pulse and energy for our community. And as you can imagine, it wasn’t long before Yagdil Torah outgrew its first home.

The concept for Yagdil Torah was more than just proven; it was clear and it was vital. And now it needed a permanent home. Immense efforts were made to secure a larger and more prominent home for Yagdil Torah. A place that can reflect its core mission of making learning, Farbrengens, and growing as a community – a part of every Yid’severyone’s life.

It wasn’t long before these efforts paid off, and the incredible Hashgacha Pratis was clear; a unit of over 2000 square feet was available for lease within the same building that Yagdil Torah was renting until now. A lease was signed, and the space was secured for years to come.

With just over a half-year until 11 Nissan (“Shnas” 120), the Yagdil Torah members wanted to take on a bold resolution of having the new place renovated and ready for The Rebbe’s birthday. Their aim was to host a grand opening event and inauguration as a “gift” to The Rebbe.

Several members took it upon themselves to spearhead this spirited undertaking in spearheading major renovations and planning for the building of a revolutionary Beth Medrash. Others took to the phones to raise the capital. And within several weeks of inception, this unique project was in full swing.

It was clear that no corners could be cut, and no expense be spared when building a Beth Medrash in which anyone and everyone can feel comfortable. The space needed to reflect a new era in Torah Study for Montreal’s flourishing Jewish community.

As the day of 11 Nissan drew nearer, the center began to blossom. Brand new construction, with the smell of fresh paint and new furniture in the air, Yagdil Torah’s home was nearly ready for the grand opening. A stunning place equipped with state-of-the-art lighting, handcrafted book casing, beautifully wood-polished tables with hundreds of comfortable seating, a lounge area, and a fully functioning kitchen boasting a cutting-edge coffee maker, and fully-stocked fridges with cold drinks and refreshments available on demand.

The place was built in a fashion that made it clear to the attendees that all you need is to sit and learn, – because everything else beyond that is taken care of.

For the grand opening, Rabbi Shuchat and the board arranged for Rabbi Simon Jacobson to come to Montreal to lead this to be the guest speaker for this landmark event for an entire Shabbaton weekend.

The long-awaited day arrived, and the 11 Nissan Shabbatton was nothing short of memorable. It began with the usual Thursday night learning session at Yagdil Torah. But this time, with a unique buzz in the air.

After the Chavrusa study session, the tables were arranged for a grand Seudah and Farbrengen, both in honor of 11 Nissan and the special inauguration of a new Mosad of The Rebbe. The evening began with Montreal’s esteemed Rabbanim sharing their excitement, motivation, and support for this new era. This was followed by an unforgettable Farbrenegen with R’ Simon that lasted until sunrise, with the presence of hundreds of Anash members.

Friday night, Rabbi Jacobson gave a unique Shiur in a Maamer to eager ears in the packed new Beth Medrash, and continued the Mamar on Shabbos morning. Following Shachris, Rabbi Jacobson led a Farbrengen throughout the afternoon of a few hundreds of members of Anash in Montreal.

All were moved by the inspiring speaker, and many were inspired by Rabbi Jacobson and this new era for Torah learning in Montreal. Sunday morning boasted an unprecedented woman’s brunch, where more than a hundred ladies enjoyed a catered event and a special talk from Rabbi Jacobson.

While this inaugural event was an incredible way to introduce Yagdil Torah to the Montreal community. kick off a special organization, it was crystal clear following it that this was only just the beginning.

With new members constantly joining, new initiatives being worked on, and an influx of Yungerleit establishing more Chavrusas and joining Shiurim, it is evident that Yagdil Torah of Montreal is here to ensure that this century-old Lubavitch hub has a bright future ahead.

Click here to donate to Yagdil Torah of Montreal.