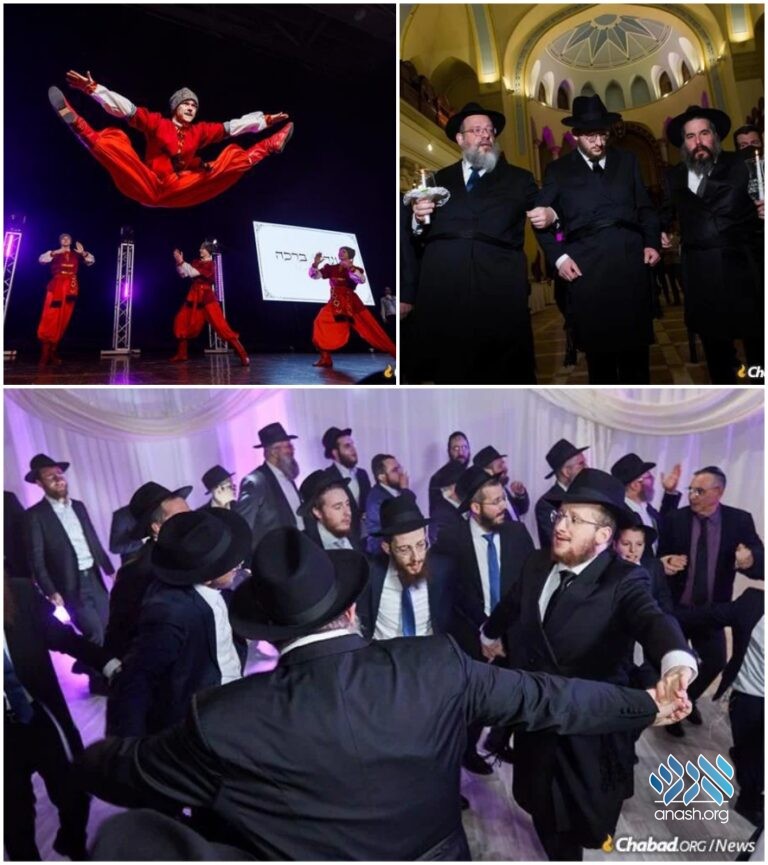 As the world focuses on the Russia-Ukraine border, the shluchim to Kharkov, just 25 miles from the border, were busy with something else: Preparing their daughter’s 500 person wedding.

The wedding of Bracha Moskovitz of Kharkov, Ukraine, and Mendy Katan of Kfar Chabad, Israel, took place on Jan. 26 in the eastern Ukrainian city of Kharkov amidst growing international tension.

As anyone preparing to host a wedding for 500 might expect, the last week has been a blur for Rabbi Moshe and Miriam Moskovitz, the rabbi and rebbetzin of Kharkov, Ukraine. There were the food deliveries, some last-minute shopping and late-night airport runs, but nothing they haven’t encountered before. After all, this was the third time they were making a wedding for one of their children in their hometown, Ukraine’s second-largest city. But this time around, it came with an added pressure: Kharkov, the city where the Moskovitzes have lived since 1990, sits less than 25 miles from the tense border with Russia, and thus finds itself at the center of international news and intrigue.

“People kept asking us: Are you sure you still want to make the wedding in Kharkov?” says Miriam Moskovitz, who with her husband was sent to the city by the Rebbe. They were among the first three permanent Chabad-Lubavitch emissary couples dispatched to what was then still the Soviet Union, and in the decades since, working with their growing team of emissary families, have rebuilt Jewish life in this eastern Ukrainian city. “We’ve answered all along that we’re praying for the best, but this is where we live, this is where our wedding is going to happen, and we’re not going anywhere.”

It was the bride, their daughter Bracha, who most wanted her Jan. 26 wedding to Mendy Katan of Kfar Chabad, Israel, to be held in the city where she was born and raised. Thankfully, despite various weather-related travel hitches—and the entertainment almost getting cold feet because of fears of impending war—the wedding went off without a hitch. The kabalat panim, or pre-chuppah reception, was held in Kharkov’s Choral Synagogue, followed by the chuppah, which despite the weather hovering at around 19 degrees Fahrenheit was per-tradition held outdoors in the synagogue’s courtyard. The Moskovitzes rented out an indoor soccer arena and transformed it into a massive ballroom to accommodate the 500 guests, which included dignitaries like Kharkov Mayor Igor Terekhov; local Jewish community members; Chabad emissaries from throughout Ukraine, Europe and Israel; and friends and family from around the world.

“It was, thank G‑d, a beautiful Chassidic wedding; people were very excited,” says Rabbi Moskovitz. “It was a message of hope for the community and for the city. Everything is in G‑d’s hands, but our job now is to continue to do good things.”

To help her focus on the preparations, Miriam Moskovitz stopped paying attention to the news in the run-up to the big day. Still, there was no way of avoiding it completely. Among the worried calls Miriam fielded was from the Australian embassy. She’s an Australian citizen, and they wanted to know what her escape plan was in case of invasion, requesting at the very least an alternate address. Moskovitz thanked the embassy but said she had no plans to leave nor does she have another address. “Our home is in Kharkov,” she states.

Over the winter some 100,000 Russian troops have amassed along the border with Ukraine. In response the United States, saying that Russia was poised to invade, ordered the evacuation of U.S. embassy staff family members. Ukraine itself has sent mixed signals as to what it expects, but the tension is undeniable

Meanwhile, people are worried and don’t know what to believe. In recent weeks, the rabbi’s office has seen a steadily growing number of local Jews coming to ask Moskovitz the age-old Jewish question: “Rabbi, what’s going to be?”

“No one knows what’s going to happen, and I don’t tell anyone otherwise,” Rabbi Moskovitz explains. “Our job as Jews is to continue doing what we have to do, which is studying Torah and doing good deeds.”

He is hopeful that tensions relax for everyone’s sake. The rabbi’s found himself especially buoyed since someone recently shared a letter with him written by the Rebbe in 1957, in which the Rebbe responds to an individual fearing violence in his vicinity.

“ … [T]he situation is not more serious now than it was a few months or even years ago,” the Rebbe wrote in Hebrew at the time. “With regard to [your question about] relocating because of the (unfounded) fear, we have no way of knowing which place is actually safer, and in general we know that the Guardian of Israel ‘neither slumbers nor sleeps’ and watches over each and every one with a watchful eye. Therefore it is important that you not frighten yourself nor frighten others, but rather that you strive with all your inner, spiritual being to be a source of light for those around you … .”

“This is what the Rebbe sent us here to do from the beginning,” says the rabbi. “Not to usher Jews to Israel or even to build a local community, but rather, to help each and every Jew wherever he or she might be. That’s what our focus remains.”

Perhaps the most central of the Chassidic movement’s innovations is its emphasis on joy, which, Chassidic teachings explain, has the unique power to break all boundaries. It’s why there’s nothing happier than a Chassidic wedding.

And so, as the world waited—and waits still—to see what comes next, a young Chassidic couple tied the knot along the tense eastern border, smashing a glass cup to recall the tragedies of the past before being swept up with the dancing in joyous anticipation of the future.