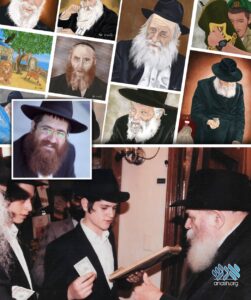 From the Anash.org inbox: Shliach and artist Rabbi Mendy Lewis of Old Tappan, NJ, shares how a brocha that he received from the Rebbe 30 years ago came to light at just the right moment, inspiring him to turn his personal challenges into blessings.

Throughout my childhood and even as a bochur, while my friends were playing sports and enjoying other activities, I could usually be found with a pencil sketching a portrait of the Rebbe.

In 5751, I was fourteen and went to the Rebbe for Sukkos. My mother had asked me to give one of my drawings to the Rebbe, so I made a pencil sketch of the Rebbe and bought a frame for it.

On Sunday, Tishrei 25, I stood in line for dollars, holding the drawing in a paper bag.

As I entered the front door of 770 and saw the Rebbe, I quietly turned to my brother telling him that I was not going to give it to the Rebbe. I was too nervous.

After I received a dollar and the Rebbe wished me “Bracha V’hatzlacha” I felt my left hand with the paper bag suddenly lift up and I quickly said: “Dos is far der Rebbe, zol gezunt zein”.

The Rebbe took the paper bag, nodded his head and said “A groisen Dank” . I was then moved along the line.

This past Tishrei, thirty years later, I purchased the video clip from JEM. I wanted to relive this special moment.

After watching the thirty second video clip numerous times, I noticed that as the Rebbe was turning his head to put the bag away, the Rebbe was saying something.

I tried to hear what the Rebbe was saying. Several hours later, I finally heard it. The Rebbe had given me an additional brocha of “Besuros Tovos”.

Upon hearing this brocha for the very first time, my emotions ran high! I had a strong feeling that I was about to hear good news. Indeed I did!

It wasn’t until six months later, however, that I realized how significant this brocha for Besuros Tovos was.

You see, a week before Pesach, the night before I was scheduled to get the vaccine, somehow, covid made its way into our home and within a couple of days, everyone had caught the virus.

A few days later, I too started experiencing symptoms. After more than a week, when the nausea, aches and pains started to ease, I started becoming weaker and weaker.

On Motzoei Achron Shel Pesach, we called Hatzolah of Rockland. Despite the fact that they service a different state and it would take twenty plus minutes to come to our home in NJ, they came right over.

I was immediately taken to the hospital where I spent four days, followed by several complications and an excruciatingly painful infection.

When I was ready to be discharged, I was told that it would be at least several weeks before I would be able to resume working.

After a few days at home on the couch I thought to myself. “How am I going to just sit here and do nothing?”

I then recalled how a student of mine had once made a suggestion to explore digital art using an Ipad and an Apple pencil and that’s exactly what I did.

During my two month recovery, this new gift from Hashem, distracted me from the severe pain and discomfort. It also helped me fulfill a lifelong dream – to do colored portraits! Most importantly, it gave me a new avenue with which to enhance my shlichus and inspire others, making a small difference in the world.

I truly feel that the warm feedback I have been receiving in response to my new portraits is a direct result of the Rebbe’s brocha as he was holding my sketch in his holy hand.

This past Shabbos, I was visiting my son in the Poconos. I attended a farbrengen for the bochurim, led by Rabbi Shimmy Weinbaum.

At the end of the farbrengen, Rabbi Weinbaum mentioned how during a Tzivos Hashem rally on the 27th of Menachem Av, 5742, the Rebbe had discussed the first posuk of kapital 120, the first kapital of the yom.

“This posuk teaches us, that when a yid feels he is in a צרה, he cannot become despondent or fearful, because Hashem is together with him and therefore קראתי וענני, Hashem will certainly fulfill his request.

When Rabbi Weinbaum mentioned this, it suddenly dawned on me that the day I came down with covid was Yud Alef Nissan, the day we all began saying kapital kuf chof.

For me it is clear that I was indeed blessed with besuros tovos, to transform my צרה of covid into צהר.

Incredibly, B”H, on Yud Beis Tammuz, we received additional besuros tovos; a permit to build a mikvah in our home/Chabad House which is currently under construction.

I was encouraged by many of my chaveirim to make my art available to the public, so I have decided to use this as an opportunity to raise funds for the building of our Mikvah in Old Tappan.

Bezras Hashem, those who find it within themselves to make a contribution, will receive a signed giclée print of a portrait of their choice.

It is my hope that this will be a catalyst to help others transform any challenge into a moment of inspiration and hope.

With wishes for Besuros Tovos and Moshiach now.

P.S. To support the building of our Mikvah and receive your signed print of my artwork (several sizes and options available) visit www.chabadot.org/besurostovos.