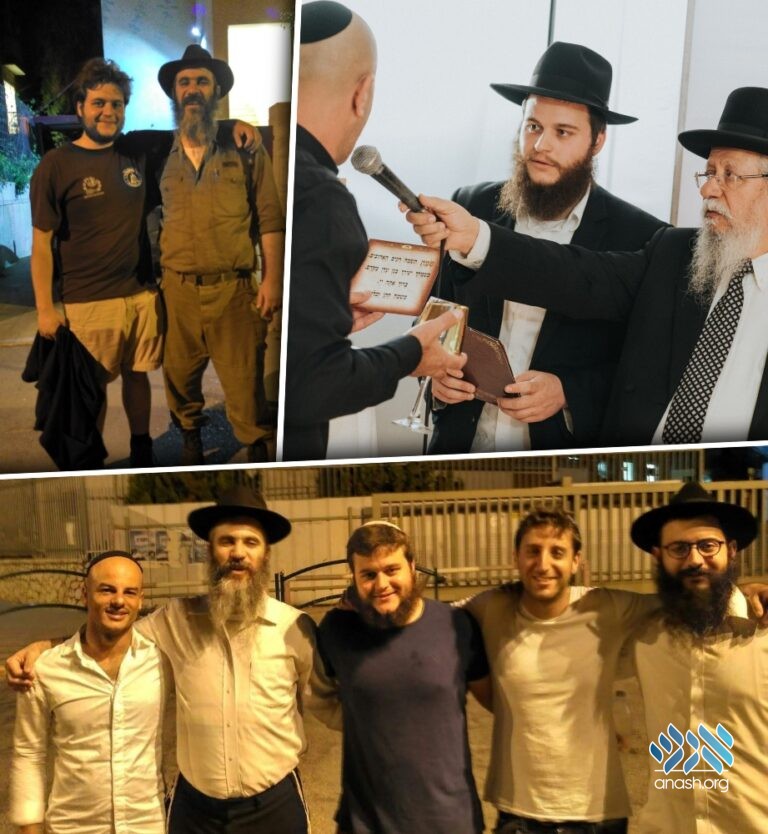 When he set off to cycle the Far East, Liraz vowed to stay far away from Chabad, but he broke his promise and it changed his life. Years later, Rabbi Liraz Zeira saw how the seeds of his shlichus were planted by the Rebbe decades earlier.

By Ashira Weiss for Anash.org Magazine

Liraz Zeira made only one rule as he readied himself for a months-long cycling trip across Asia and the Middle East. Having witnessed friends and colleagues return from such trips completely transformed, the IDF officer resolved that he would go anywhere and do anything he wanted, but he would never step foot in a Chabad House.

Over the next few months, Liraz cycled all across China and on to Bangkok, Thailand, diligently sticking to his rule. He planned to stay in Thailand touring and cycling for a year before cycling on to Turkey. From there some of his IDF buddies would arrange for him to travel by boat with his bike, back to Israel.

For a year-long stay in Thailand he would need to secure his papers, so immediately upon arrival, he headed to the Israeli embassy. “I’m sorry, we only take payment in Thai Baht,” the embassy clerk said to Liraz. With only shekels and Chinese Yuan in his wallet, Liraz was stuck.

A woman standing nearby overheard the exchange and noticed Liraz’s concern. “Don’t worry, I’ll lend you the money and you can pay me back once you’ve had a chance to exchange currency,” she said, pulling out her wallet.

“But how will I find you to pay you back?” asked Liraz.

His beneficiary was nonplussed. “When I arrived here I thought the same thing,” the woman said. “But the Chabad here is different, you don’t need to be worried.” With few other choices, Liraz took the money being proffered and reluctantly agreed to look up Chabad of Bangkok’s Ohr Menachem.

Liraz was a man of his word, and though it went against the only rule he had set for himself before leaving Israel, he found Ohr Menachem and went by, hoping to repay his debt and move on. But what was this? This wasn’t how he imagined Chabad. Backpackers and tourists milled about the lounge area, making use of the computers, chatting on landlines, and exchanging travel tips and field stories. And there was a coffee and refreshments table.

Liraz figured he could save some money if he stopped by for refreshments and coffee every day instead of having to pay for a meal. No one had tried to ‘convert’ him yet, so Liraz decided he would make an exception to his rule on the premise that it helped his wallet.

Soon enough Liraz met Rabbi Nechemiah Wilhelm and the bochurim shluchim who worked for him. He refused to put on tefillin, but gladly engaged in conversation and soon found himself listening in on classes and joining Shabbos meals.

His mind had been opened and soon, Liraz became a regular at Chabad.

Once a year, Rabbi Wilhelm arranges an annual retreat. He takes tourists on a sponsored trip out into nature, provides food and lodging, and together they spend a few days learning and farbrenging. Rabbi Wilhelm invited Liraz to join the retreat and after some convincing and the reassurance that no one would try to make him religious, Liraz agreed to go. The retreat had a great effect on him, nonetheless, Liraz continued to refuse any offers of tefillin.

It wasn’t long after returning to Bangkok that Liraz got the itch for the road once again and set off on his bike.

A week or so later, Rabbi Wilhelm traveled to Chiang Mai to meet with some fellow shluchim. The city in the mountainous north of Thailand is a 2-hour flight or 463-mile bike ride from Bangkok. As the shliach opened the door to Chabad of Chiang Mai, he noticed Liraz who jumped up to greet him. “Rabbi, this morning I put on tefillin,” he said, hugging him like they were old friends.

“While at Chabad of Bangkok,” Liraz explained. “I realized more and more that what you have is the truth. By the time the retreat ended I knew it in a very real way. As I rode to Chiang Mai, I realized, if it’s the truth then I have to do it,” he finished.

It wasn’t long before Liraz ditched his bike and returned to Bangkok where he applied himself to studying Torah and Chassidus. He had been saving money along the way to buy himself a new bike for the final leg of his trip. Now he gave this money to Rabbi Wilhelm. “It’s for tefillin,” he said. “Buy me the nicest pair of Chabad tefillin you can get.”

When Purim came, Liraz borrowed a hat and jacket from one of the bochurim and made it his costume.

“You’re trying to show us how you’ll look a few months from now?” one of his friends jibed.

“Why do you think it will take so long?” Liraz retorted jokingly

If clothes make the man, Liraz’s Purim costume made him. Once back in Israel, he enrolled in Yeshivas Tomchei Temimim in Migdal Ha’emek full time, and before long he married Anat.

These days Liraz and Anat serve as shluchim for Chabad on Campus at Hebrew University in Yerushalayim, but in the early days of their marriage, Rabbi Wilhelm gave the young couple a gift. He appointed them to arrange a shiur each week in Tel Aviv for Chabad of Bangkok alumni. And so, each Tuesday Liraz would deliver a shiur at the home of Rabbi Daniel and Dalia Sanoff, who now serve as shluchim at Chabad on Fulton in Poughkeepsie, New York, serving the students at Vassar College. Dalia had also begun her teshuva journey at Chabad of Bangkok, but the Zeira’s and Sanoff’s connection would not end there.

In the words of Liraz:

“Around six years ago we met a student at Hebrew University named Asi. He was doing a Ph.D. in meteorology, a serious student, who hadn’t learned much about Yiddishkeit. As we got to know him better, Asi became more and more involved with our Chabad community and also slowly became serious about his commitment to Torah and Mitzvos.

“As Asi was becoming more observant, he became curious as to what exactly the Rebbe was doing at the moment of his birth. He was born on a Sunday so after ascertaining the time of his birth, Asi pored through JEM’s My Moment footage, until he came across a clip of the Rebbe giving out dollars on that day. He searched the archives of photos and came across one whose timestamp corresponded to the Israeli time at the moment he was born.

“Suddenly my phone rang. It was Asi and he was talking excitedly. “Rabbi, there’s a picture here of the Rebbe giving a dollar to a woman holding a baby and accompanied by three girls. Someone has tagged the picture as Noah Berenson. I know that’s your mother-in-law’s name, but maybe there is more than one Noah Berenson?”

“I quickly looked up JEM’s website and keyed the photo ID number into the search box. Sure enough, the woman in the picture was my mother-in-law, accompanied by my sisters-in-law, and at the very bottom of the photo, mostly hidden by the stack of dollars in Rabbi Groner’s hand, you can see my wife, Anat. My in-laws had become close with Chabad in Boston, Massachusetts, and sent their children, including Anat, then in second grade to the Chabad Hebrew School. The Hebrew School had brought their students to New York to see the Rebbe a few times and on that particular Sunday, my parents-in-law had decided to bring their children and visit the Rebbe themselves.

“At the moment Asi was born, the Rebbe was giving Anat a dollar and a ברכה, and one could infer, the נתינת כח that would take her through her youth and adult years on the path that would lead her to be the Rebbe’s shlucha to bring this young man back to a life of תורה and Yiddishkeit.

“People learn many lessons from this story, but for me, the biggest insight is that Assi was bothered enough to check what the Rebbe was doing at the moment he was entering this world. And when he looked for Hashem’s fingerprints, for the Rebbe’s fingerprints in his life, he got to see it in a most glorious way. For me, this is an embodiment of the Rebbe’s instruction to us to open our eyes and see the Geulah.”

That year, Asi joined Liraz on his annual visit to Migdal Ha’emek, and soon he too became a full-time Yeshiva student. When he was ready to seek a shidduch someone set him up with Tal, a Vassar College alumnus who had spent some time studying at Machon L’Yahadus in Crown Heights and had recently moved to Tel Aviv where she was studying at Pnimiyut, a Midrasha run by Shira Weiner, Anat Zeira’s sister.

Asi and Tal, both “spiritual grandchildren” of Chabad of Bangkok, married two years ago and now serve as shluchim for University students in Eilat, along with their baby Yosef Yitzchok.