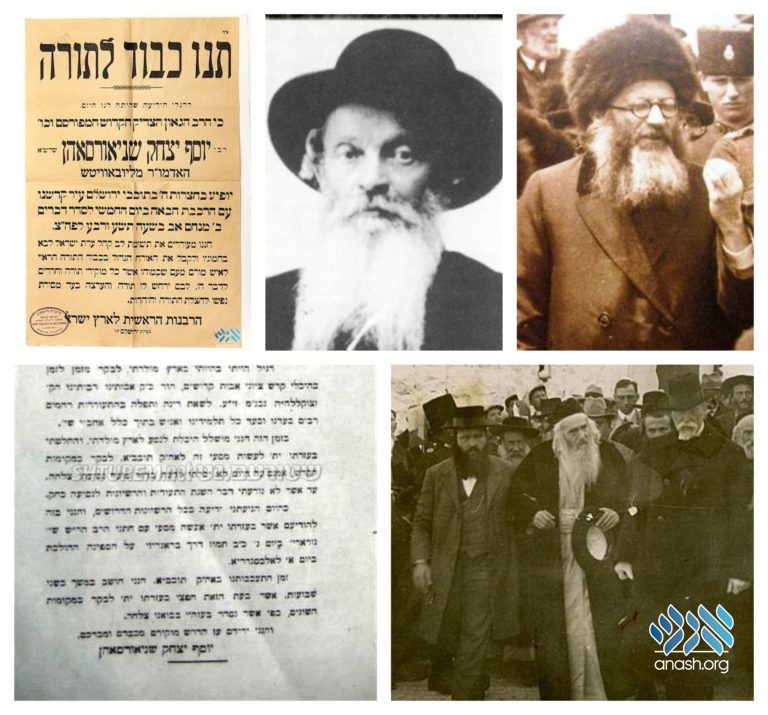 2 Av 5779 marks 90 years since the Frierdiker Rebbe arrived in Eretz Yisroel for his first and only visit to the Holy Land.

After leaving the Soviet Union following Simchas Torah of 5688/1927, the Frierdiker Rebbe could no longer visit the ohelim of the Rabbeim, whether in Rostov, Lubavitch, Haditch or Nyezhin. In 5689/1929, the Frierdiker Rebbe decided to go to Eretz Yisroel, and visit the holy places there. The eventual trip to the United States had already been planned, but people did not know about the Rebbe’s plan to travel to Eretz Yisroel.

On Rosh Chodesh Tammuz, the Frierdiker Rebbe received all the necessary documents and visas needed to travel. He had been helped by many people in Eretz Yisroel, including Chief Rabbi Rav Avrohom Yitzchok HaKohen Kook and the rov of Yerushalayim Rav Yosef Chaim Sonnenfeld. On Shiva Asar B’Tammuz a letter arrived from the Frierdiker Rebbe addressed to the hanhala of the Yeshiva Toras Emes in Yerushalayim, informing them of his intent to visit Eretz Yisroel in two weeks’ time. That was the first they heard of the trip, and they jumped into action, making the necessary preparations for the Rebbe’s stay.

On 23 Tammuz, the Frierdiker Rebbe set out for Berlin, accompanied by the Rashag and others, where he was greeted by the Rebbe and the Rebbetzin Chaya Mushka. From there they all traveled together towards Vienna. Shacharis on the 24th of Tammuz was davened in Prague, where the train had stopped, and later that day, they arrived in Vienna.

The next day, Friday, they traveled to Trieste, Italy. At 5:00 pm on Friday they boarded a ship that crossed the Adriatic Sea and docked in Brindisi, Italy on Sunday noon. There the Rebbe and Rebbetzin bid farewell to the Frierdiker Rebbe. The ship then sailed from Brindisi to Egypt, and on the 29th of Tammuz, they arrived in Alexandria, Egypt.

At the port in Alexandria, they were greeted by local dignitaries from the Jewish community. They were also greeted by two visitors from Eretz Yisroel, Harav Shlomo Leib Eliezarov and his brother-in-law Harav Mendel Noeh, who had come to accompany the Rebbe on the last leg of the journey. In Alexandria, the Frierdiker Rebbe visited local dignitaries and Rabbonim, including his cousin Rabbi Dovid Tzvi Aryeh Schneersohn, who was also a brother-in-law to the Rabbonim Eliazarov and Noeh.

On Rosh Chodesh Menachem Av, the procession left Alexandria and traveled by train to Qantara, a border city that sits on both sides of the Suez Canal. This was a seven and a half hour trip and was to be the final stop in Egypt. From there they would take the train directly to Eretz Yisroel. The Frierdiker Rebbe received VIP treatment, with a special dispensation that allowed him to bypass customs, and to proceed directly to the train without being stopped.

At 5:30 am on Thursday, 2 Menachem Av, the train that left Qantara stopped in Rechovot, then a small settlement. At 6:00 am it arrived in Lod, its final destination. There, the Frierdiker Rebbe later wrote, he could see the great excitement that his visit had caused among the Yidden in Eretz Yisroel.

In a letter from 14 Cheshvan 5690/1929, more than two months later, to his daughter, Rebbetzin Shaina, HY”D, the Frierdiker Rebbe writes about the hundreds who showed up in Lod train station, young and old, many of whom had been Chassidim of his father and zeides. He goes on to write how many of the older ones saw in him his father, the Rebbe Rashab, his zeides, the Rebbe Maharash, the Tzemach Tzedek, and so on, and they wanted to be in his presence. The emotions were mixed: The joy of the moment, coupled with the bittersweet memories of old. They had long been removed from the centers of Chassidus in Europe.

It took some time until the Frierdiker Rebbe could make his way from the platform to the train that was to take him on the final trip to Yerushalayim. The government provided four train cars for the throngs who were to accompany the Frierdiker Rebbe.

Among the Chassidim who were there to greet the Frierdiker Rebbe in Lod was the chossid Reb Avrohom Paris. He knew that the trip was costly, and so he sold an orchard he owned in Petach Tikvah and collected some more money, and thus amassed a tall stack of cash. When the train arrived he handed the Frierdiker Rebbe the stack. The Rebbe asked him what that was, to which he responded: “Rebbe, Ma’amad!” That money helped the Frierdiker Rebbe immensely on the trip.

At 5:00 pm, the Frierdiker Rebbe headed to the Old City to daven mincha at the Kosel HaMa’arovi. Hundreds accompanied him with heavy police protection. These were difficult times in Eretz Yisroel, with the Arab street seething at the increased Jewish aliya.

So ended day 1 in Eretz Yisroel.