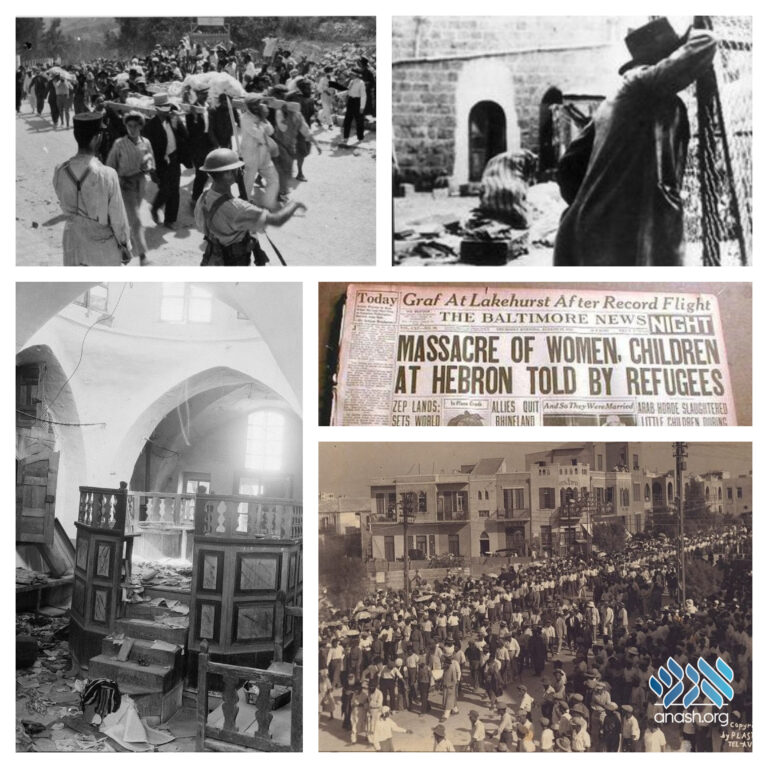 Shabbos, 18 Menachem Av, 5689/1929. Arabs in Chevron began a widespread massacre – killing and maiming many men, women and children. When it was all over, 67 Yidden were killed, including 24 bochurim from the Slabodka Yeshiva.

The riots had begun on Friday in Yerushalayim. Tensions had begun to rise after Arabs were unhappy with the allowances made for the mispalelim at the Kosel HaMaarovi. On Friday, after Muslim prayers, during which the Imams incited the masses to stand up for the honor of their holy places, mobs began to riot in Yerushalayim, looting and killing. Soon the Arabs began to spread lies that the Jews were desecrating their holy places.

On Shabbos Day, mobs came from around Chevron and all the way from Yerushalayim to kill in Chevron. The Jews were locked in and they could not flee. Many barricaded themselves in the home of Eliezer Don Slonim, HYD, who good connections with Arab sheikhs and his home was thus considered “safe.” Ultimately, however, those connections proved useless, and the biggest death toll was exactly there. Eliezer Don, his wife, his shver and shvigger and many others were murdered. His son Shlomo was left for dead and survived. (He passed away in 5775/2014.)

The Frierdiker Rebbe heard about the massacre while on the ship on the way back to Riga, and he fell ill as a result.

After the massacre, the Jews were evacuated from Chevron, and did not return until after the Six-Day War in 5727/1967.

The riots in Yerushalayim lasted for about a week, and riots took place in Tzfas as well, where several people were murdered. However, armed groups managed to protect the Jews from a widespread massacre. The British soldiers for the most part stood by idly and did nothing to stop the killings.