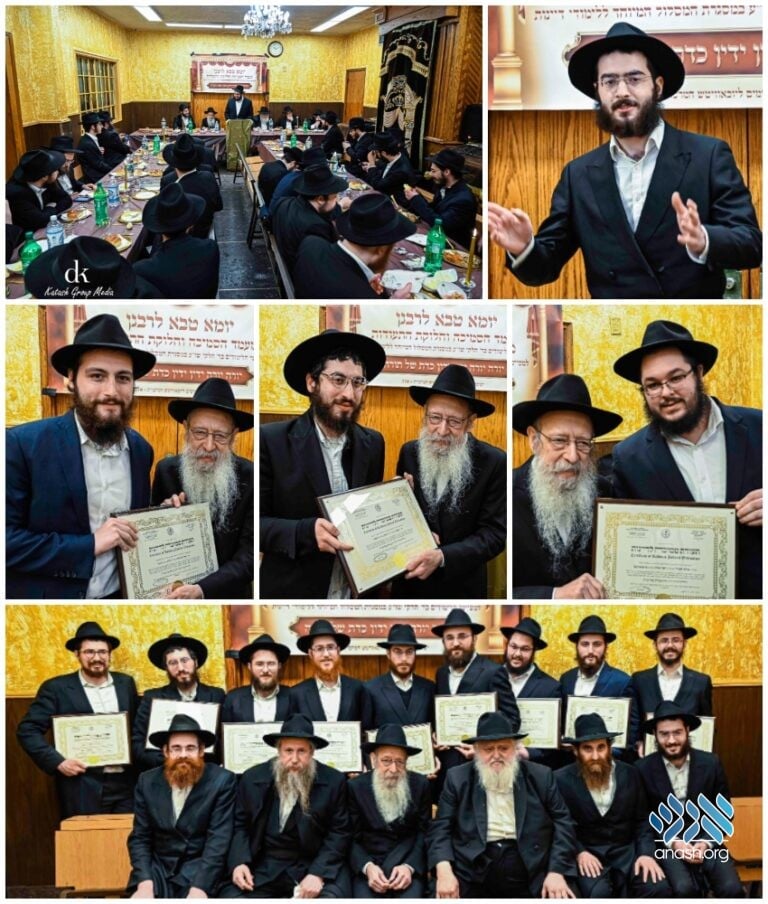 After four years of intense study, a group of 16 bochurim and yungeleit successfully completed 770’s demanding Dayanus program. The major achievement was celebrated with a grand Melava Malka joined by the Yeshiva’s Hanhala, proud family members, and fellow yeshiva students.

After spending thousands of hours of learning over the past four years, and successfully completing sixteen tests on all major parts of Shulchan Aruch, a group of 16 bochurim and yungeleit completed 770’s four-year Dayanus program.

This revolutionary program started a few years ago with a small group of Bochurim receiving periodical Shiurim from Rosh Yeshiva of 770 Rabbi Zalman Labkowsky.

As the program grew in popularity, the Yeshiva hired Rabbi Ahron Liberow as a Meishiv exclusively to this program, to address questions and help with the material being learned.

“This program has brought about a true revolution in the fulfillment of the Rebbe’s directive that Dayanus be taken up by anyone who is capable. To the best of my knowledge, there has never been such a large group learning Dayanus together in Lubavitch history,” Rabbi Ahron Liberow told Anash.org.

With the help of a generous donor, the program has grown to include over 50 Bochurim and yungeleit learning in 770 and in the various Kollel’s around Crown Heights and beyond.

The program is known as being one of the most comprehensive and prestigious Dayanus program out there, covering most major parts of all four sections of the Shulchan Aruch, and culminating with receiving Semicha in the entire Shulchan Aruch “Yoreh Yoreh Yodin Yodin”. Unlike many other programs which cover only parts of Choshen Mishpat, 770’s Hanhala has always believed that one can’t be a Dayan or a Rov of a community without being proficient in the Halachos of Shabbos and Birkas Hanehenin, and without having a hand in the various other major parts of the Shulchan Aruch such as Mikvaos and Kidushin.

For more information and for dedication opportunities they can be reached at [email protected].