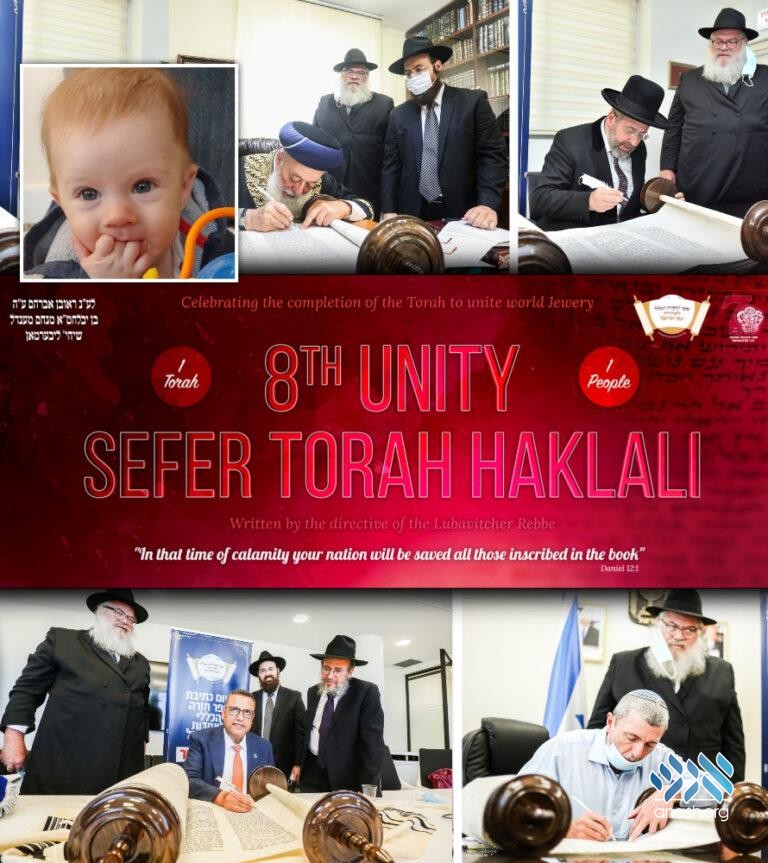 A special siyum will celebrate the completion of the eighth Sefer Torah Haklali in Toronto, after thousands of letters were purchased in memory of Avremele Lieberman who tragically passed away at four months old.

A grand siyum this Wednesday will celebrate the completion of the 8th Sefer Torah Hakloli – Unity Torah, after thousands of letters were purchased in memory of Avremele Lieberman who tragically passed away at four months old.

The event will be held as a drive-in siyum in Toronto for locals, and will be broadcast live on Chabad.org and on Anash.org.

In 5742, the Rebbe began the campaign to write Unity Sifrei Torah. Since then, seven Sifrei Torah were written, and the 8th was begun at the kinnus hashluchim five years ago.

Last year, following the tragic passing on on Yud Alef Shvat of Avremele Liebermanon, son of yblcht”a Rabbi Mendy and Itty Lieberman, Shluchim in Toronto, ON, his family, fellow shluchim and friends decided to turn grief into action.

Together with bochurim from Yeshivas Lubavitch Toronto, they launched a campaign to complete the Sefer Torah Hakloli in Avremele’s zechus. At that point, the 8th sefer Torah hakloli had 100,000 letters still unclaimed to be completed.

Since then, over 75,000 Jewish men woman and children from all walks of life were inscribed into this Unity Sefer Torah, belonging to Klal Yisrael in honor of Avremele a”h. Over 25 thousand IDF soldiers also have a letter in this Torah.

A year later, the Torah is ready to be completed, and a grand siyum is planned. The siyum began in Eretz Yisroel with the Torah being brought to the Knesset for the first time in history and had many members of the Knesset write letters. Ashkenazi Chief Rabbi David Lau and former Sephardic Chief Rabbi of Yerushalayim Shlomo Amar also wrote letters.

The event on Wednesday will feature messages from the Chief Rabbis of Israel, a video presentation about ois bsefer Torah,a message and birchas kohanim from shliach Dani Cohen of Chevron, and live music by singer Shlomo Simcha. The Sefer Torah itself will also remain in Toronto, becoming the first-ever Sefer Torah Hakloli to remain in Canada.

“When the world is trembling and shaking from all the effects of the pandemic and politics the Torah, being the blueprint of the world, brings the world the strength it needs to realign itself with Hashems plan and brings healing and strength to all of Klal Yisrael,” Rabbi Mendy Lieberman said.

“This especially applies to a Torah written for Klal Yisrael, uniting klal Yisrael in this Torah. The Rebbe also stated numerous times that a letter in the Torah is a Jewish person’s kos shel brocho, materially and spiritually,” he said.

When the first Sefer Torah Hakloli was completed in Eretz Yisrael at Miron on Lag Ba’omer in the presence of many leading Rabbonim in Eretz Yisrael the Rebbe sent mashke for the siyum, and the Rebbe listened in on the line to a recount of the siyum celebration.

Following the siyum, Rabbi Moshe Shmuel Oirechman, chairman of the vaad for Sefer Torah Hakloli, asked the Rebbe if he should continue to write a second Sefer Torah. The Rebbe responded that he should, on condition that he will not stop until every Jew in the world has a letter in one of these Sifrei Torah of Klal Yisrael. Fulfilling that directive, he has been involved in this campaign of the Rebbe ever since.

Immediately following the siyum and hakafos for the 8th sefer Torah, the 9th one will begin to be written. There are already many who are signed up for the 9th Sefer Torah Hakloli.

If you know anyone who still doesn’t have a letter dedicated to them in one of these Sifrei Torah please sign them up at UnityLetter.com