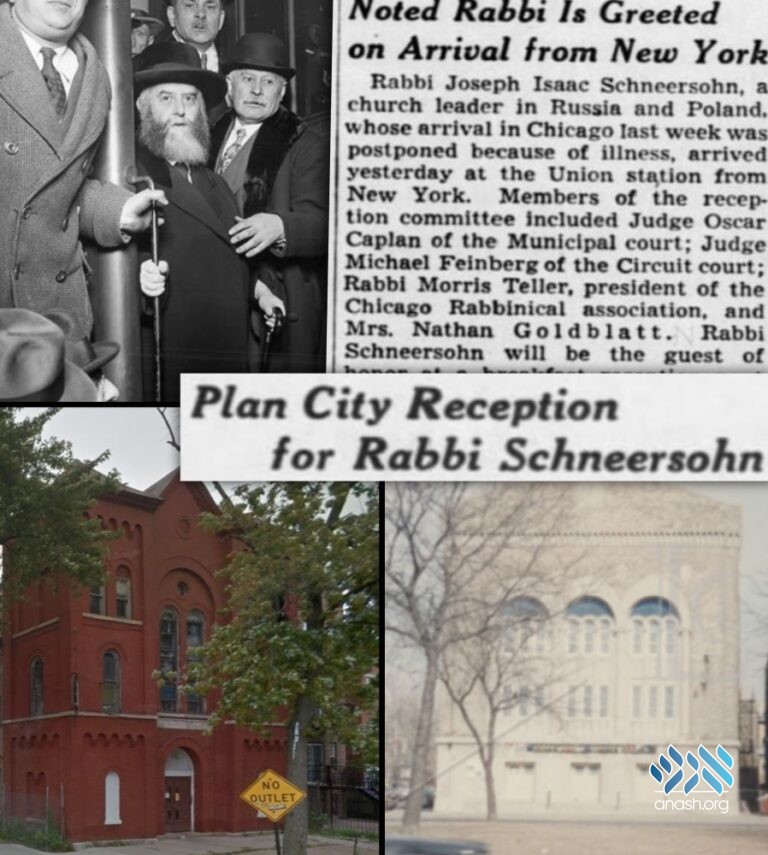 80 years ago this month, the Frierdiker Rebbe stepped onto the platform at Union Station in Chicago beggining a week-long trip focused on inspiring and strengthening the local Jewish community and its commitment to Jewish education.

80 years ago this month, the Frierdiker Rebbe stepped onto the platform at Union Station in Chicago where thousands of Yidden waited to greet him. The Frierdiker Rebbe would begin a week-long trip focused on inspiring and strengthening the local Jewish community and its commitment to Jewish education.

Although he was in poor health and had already visited Chicago during a whirlwind tour of communities in North America in 1929, the Frierdiker Rebbe was so committed to visiting Chicago again that he made the trip. The Windy City would end up having the distinction as the only locale outside of the New York area that the Frierdiker Rebbe visited after settling in the United States in 1940.

It’s difficult today to picture how American Jews felt in the early 1940s. They saw themselves at a crossroads with many different paths open to them. By and large, they remembered where they came from. In Eastern Europe, the warmth, joy, and deep roots of their Jewish heritage had left indelible marks on their personalities. But America was challenging. Learning a new language was hard, making ends meet and finding a job – especially one that did not require working on Shabbos – even more difficult.

Moreover, the challenges did not only come from external pressures. In Europe, the local population had made sure that the Jews remained conscious of their religious identity. By contrast, in the U.S., a melting pot mentality prevailed. American Jews felt that all the doors to success could be opened for them; all that was necessary was to be like everyone else.

They also had to battle sadness and despair. They knew of the horrors that their brethren were suffering in Europe and that saddled them with a heavy inner burden.

In this environment, the Frierdiker Rebbe sounded his clarion call, “America iz nisht andersh”; A Jew in America should live no differently than he lived in Europe. Arriving in America in 1940 from Warsaw, broken in body from the Soviet persecution and having witnessed firsthand the Nazi conquest of Poland, the Rebbe rallied American Jews to a reawakening of pride in their heritage. With a firm and vigorous spirit, he inspired them to strengthen their study of the Torah and the observance of its mitzvos, and to provide authentic Jewish education for their children.

When speaking to the community and its leaders he spoke from the heart, crying out for the local Jewish leaders to reorient the direction of Jewish life as a whole, and Jewish education in particular.

The Rebbe’s talks and maamorim left a profound and lasting impression on the Jews of Chicago. Years later, the Rebbe’s listeners would share their memories of the visit with their children and grandchildren.

As one of the members of the Chicago community, Matt (Moshe) Brandstein, related, “My father remembered that meeting very fondly. With much reverence, he would talk about it as one of the holiest moments of his life. The impression was something that stayed with him for the rest of his life.”

The impression produced by the visit was so powerful that the Chassidim asked to have a record of the Rebbe’s talks published as a book. The book was published in Hebrew and Yiddish under the title “Bikkur Chicago”.

For the 50th anniversary of the visit, Lubavitch Chabad of Illinois led by Rabbi Daniel Moscowitz a”h, published an english translation of the maamorim of Bikur Chicago. A couple of years ago, Rabbi Meir Moscowitz initiated a full translation of the Sefer (maamorim/sichos/diaries) and it was published by Kehos/Sichos in English under the title “Touching a City’s Soul”.