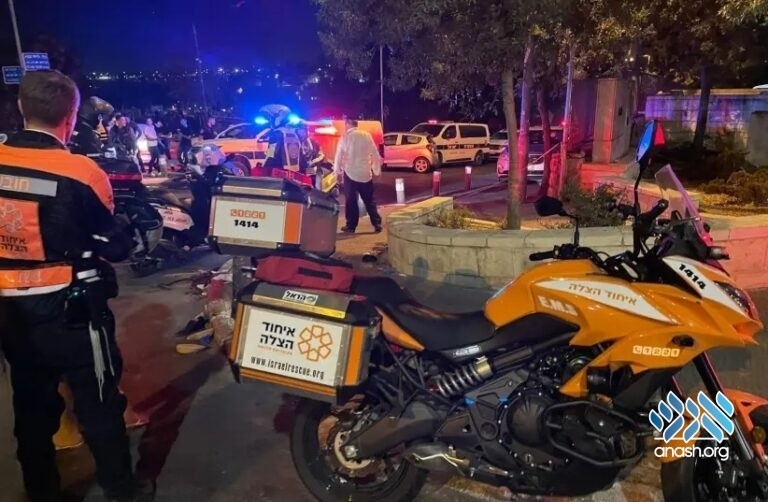 Eight people were injured, including two seriously, in a shooting attack near Kever Dovid in Yerushalayim on Motzei Shabbos. The victims include 4 members of a family from Williamsburg.

Eight people were injured, including two seriously, in a shooting attack near Kever Dovid in Yerushalayim on Motzei Shabbos.

According to initial reports, two terrorists apparently fired at a bus and fled the scene, police are currently conducting searches in the area.

Four members of a Williamsburg family were among the victims shot in the terror attack on Motzei shabbos.

MDA paramedics provided medical treatment to the victims and evacuated them to hospitals. Among the seriously injured victims are a pregnant woman in her 30s and a tourist from the United States.

Local residents are reporting seeing security forces searching for the terrorists in the eastern Jerusalem neighborhood of Silwan.

Police initially blocked the exits from the Western Wall plaza and the crowd was unable to leave the area. Later, worshipers were permitted to leave.

MDA Senior EMT Nehemia Katz and MDA Paramedic David Trachtenberg said: “We were on scene very quickly. On Ma’ale Hashalom St. we saw a passenger bus standing in the middle of the road, bystanders called us to treat two males around 30 years old who were on the bus with gunshot wounds. They were fully conscious and walking with wounds to the upper body. We provided them with lifesaving treatment and were taken to hospital by MDA ambulances that had arrived at the scene.”

“From there we went to the King David’s Tomb parking area and found 4 males, one aged 50 and three aged 30, all fully conscious and with gunshot wounds. A few moments later the MDA ATV brought us another victim, a woman in her 30s with gunshot wounds. We provided lifesaving treatment to the victims and conveyed them urgently to hospitals, with 2 in serious condition and 5 in mild to moderate condition.”

Mayor Moshe Lion, commented on the shooting attack “I trust the Israel Police and security forces to lay their hands on the despicable terrorist tonight. Jerusalem is stronger than any event and we will not allow any terrorist to harm the routine of life in the public sphere. The capital of Israel will continue to be a city full of life, joy and vitality,” he said.