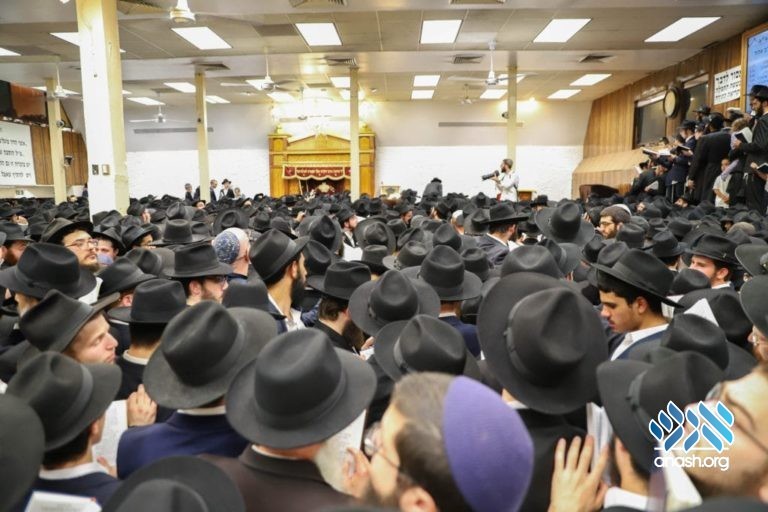 Rabbi Shimon Posner describes what it was like to stand right in front of the Rebbe during tekios on Rosh Hashana.

It was called the washing machine, this relatively small place in the Rebbe’s Shul. It constituted some 400 square feet, and was only thus called on Rosh Hashanah. It was directly in front of where the Rebbe stood when sounding the shofar. Those who braved entry were subject to brute concentric-eccentric release and acceleration as our bodies were tossed a few inches in one directions and then jerked a few feet in the opposite. Soon, we were all red-faced: huffing and puffing and sweating. It was also called the washing machine because all who entered left wrung out and slightly damp.

But it wasn’t conventionally called the washing machine: it was called Tekios, the Ashkenazic-pronounced Hebrew for the sounding of the shofar. It was the Rebbe himself who sounded the shofar, and to be close enough not only to hear, but to see, to witness, to absorb, to be as much of a part of this as you could, this made the young and able push towards the front, towards the fortress-like bima, upon which the Rebbe stood.

To get the flavor of what it was, it’s helpful to forget what you know of synagogue architecture. Conventionally, the bima is upon a slight rise, decoratively enclosed. In 770, that would have been eaten up in a minute by the sheer pressure of humanity. Here the rise was a good four feet high, and built of solid two by fours and four by fours and could withstand black-hole gravitational fields without yielding.

And everyone who could, pressed forward. Never fighting, in the aggressive sense, but propelling oneself as forward as one could and once achieving the desired spot, holding onto it as the sea of humanity battered your position for all sides. Tekios. The washing machine.

Once, in the late Sixties, a Cambridge student spent Rosh Hashanah in 770. When he returned to England he was questioned by those who had been there in earlier years: how was it? He described as well he could the experience of hearing the Rebbe sound the shofar. And where did you stand, they asked. Directly in front of the bima, he replied. The washing machine.

However did you get there, they asked wide-eyed, trying to juxtapose this gentle-mannered student in the washing machine. I tried something that no one had ever done before, he replied with a calm smile. “I said, ‘excuse me, please.’”

Upon the bima were placed four large paper sacks held with twine, filled with requests from those who had beseeched the Rebbe for what they needed, or thought that they needed. The Rebbe opened his Tallis, and covering his face, he covered the beseechments.

The Rebbe lead the shofar service: “From the depths, I called out to G-d”. “I rejoice in your teachings, like one who has found a great treasure.” The Rebbe made the bracha, “who has sanctified us with His mitzvos and commanded us to hear the voice of the shofar,” and then lifted the shofar to his lips. The washing machine stopped pulsating.

Clear, distinct, deliberate, the Rebbe sounded the shofar. And ended with the post-shofar utterance, “fortunate is the people who know sound of the shofar. . .”. The washing machine parted, “like the Red Sea for Moses” journalists invariably described it, as the Rebbe, followed by the elders who had been safely ensconced on the bima led the way to the front of the shul and beheld the people.

It was a moment when you knew you had just seen something, but you didn’t know what you had seen.

In grade school, the music appreciation instructor brought us to a conservatory. The guide showed us the different woodwind instruments, the trombone, the clarinet, the saxophone. Then he took a small wooden mouthpiece out of his pocket and blew it. This little whistle is attached to the mouth of each instrument, he pointed out to us. It’s the blowing of the whistle that makes the instrument play music. The notes that come out differently to make a clarinet a clarinet, a saxophone a saxophone, an accordion an accordion — these are only the commentary. At the heart of every wind instrument is this humble whistle. The whistle makes the symphony.

The words of the Rosh Hashanah prayerbook, the machzor, deserve a year of study. The historical, allegorical and mystical insight of the shofar are informative and moving. But the sound of the shofar by itself is soaring.

It’s been described as a simple unadorned cry, a baby crying for his father, and His Father answers in kind. There is the father who answers his teenager’s petition for a higher allowance, or the car keys. There is the father who answers the baby who cannot form words. With all of our spiritual and intellectual sophistication, we need to cry like a baby to be truly heard. The whistle behind the instrument. This is what reaches our Father, in an immediate and visceral way.

I wonder: was this what I saw from the vantage point in front of the bima, seeing something without knowing what I saw? Was the Rebbe able to come from a place irreducible that it penetrated those who witnessed it: an irreducible cry? The Rebbe was described by many as eyes that not only saw you, but that helped you see yourself. In the way that leadership is not giving people what they want but giving them what they need, so the Rebbe helped people see themselves for what they were, what their purpose was and what their journey ought to be.

Rosh Hashanah, we are told, is the anniversary of the world’s creation. Not the day the heavens and the earth were formed, but the day when Adam and Eve were; for Adam and Eve are the world’s purpose ,and we are Adam and we are Eve, and if we can rediscover that archetypal moment of creation, when our being is perfectly aligned with our purpose, then we have touched our Creator. But we don’t call him that, not today, especially not today, the day of creation. Today he is our Father.

Maybe that’s what I saw. Maybe the Rebbe facilitated a Jew seeing his/her purpose through the eyes of our loving Father, if only for a minute. But a minute that informed a year, and a lifetime. To renew on this day for a new year. A cleansing of the tired perspective, making room for the new. I could use a visit to the washing machine again.