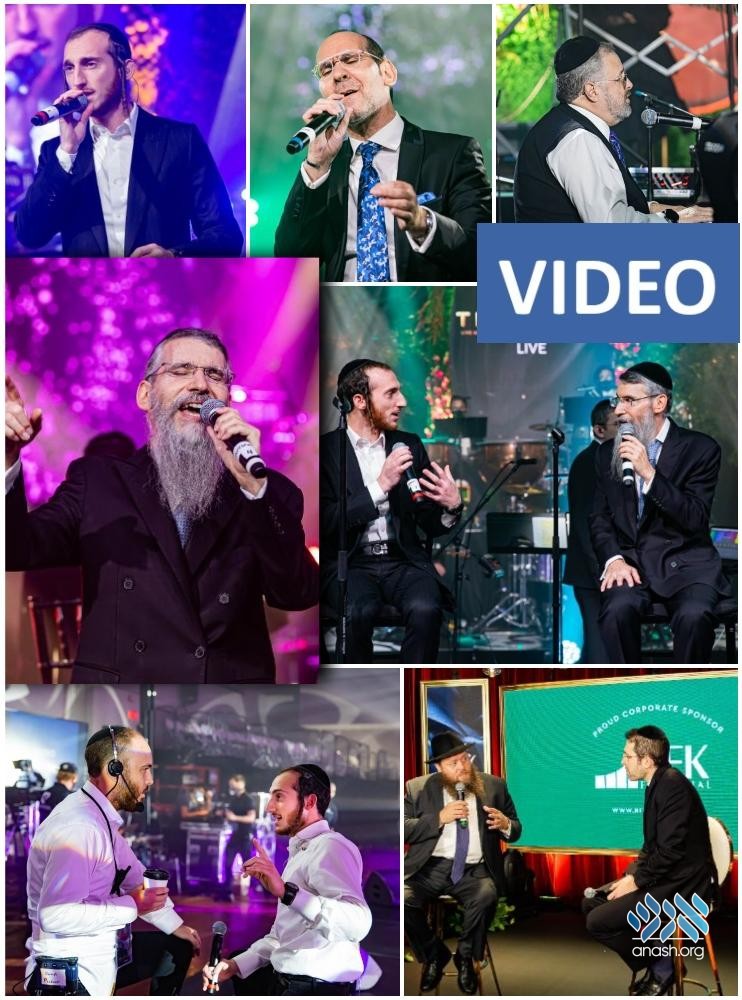 Over 600,000 people tuned in last night to watch the Tenathon. In an unprecedented display of innovation and elegance, the Tenathon provided the participants with a performance that they will never forget! The Tenathon was hosted by Ten Yad in support of Hachnasas Kallah.

Last night, the Tenathon was broadcast, live, from our incredible stage to over 600,000 viewers.

Over 350,000 devices tuned in to watch the monumental performance. Families and individuals alike watched the Tenathon from phones, tablets, computers and flatscreens, bringing it up to well over 600,000 viewers!

The Tenathon exceeded all expectations. The marriage of innovative design and cutting edge technology provided for a spectacular visual performance unlike anything ever seen before in Jewish entertainment.

Avraham Fried provided a truly sensational performance. His piercing, soulful vocals filled the room and he electrified the stage with his ever dynamic stage presence.

The classics from the 70s and 80s were given a whole new life as they were performed by the 60 piece Freilach Philharmonic, directed by the legendary Yuvel Stupel who was flown in from Israel especially for the event.

Shulem Lemmer joined Avraham Fried on stage for multiple musical numbers and performed the song “Memories”; a tribute to his sister who passed away a few years ago, and a nod to the intergenerational theme of the video feature, directed and produced by cinematographer Shlomo Chaim Rivkin.

Rabbi Y.Y Jacobson shared the idea that when preparing for a wedding we rely on those around us for support during this critical time in our lives. He noted that some people do not have that support system, and that Ten Yad shows up for them to guide them through this precious time. He introduced the video as one of many stories of those who do not have those resources and rely on Ten Yad to provide them with this valuable support.

The video invited the audience to take a trip back in time as Rochel, now a bubby, relives the moment in time when she was a young bride in the 70s was forced to prepare for the most important day of her life without her mother to guide her.

Eli Marcus performed his hit song, “Mazal Tov,” a lively composition containing brachos for every Chosson and Kallah. His energetic performance filled the room with joy and captured the audience as he effortlessly danced around the stage while delivering a flawless performance.

Israeli singing sensation, Ishay Lapidut joined Fried on the stage as a surprise addition. Together, they sang a duet of ‘Aleh Katan, composed by Lapidut and originally sung by Fried.

To finish off the musical portion of the evening, another surprise guest, master composer Yossi Green appeared on the piano and performed, along with Avraham Fried, a medley of his musical masterpieces from throughout the years.

Throughout the evening, Charlie Harary shared touching stories about Hachnasas Kallah throughout the ages and emphasized the idea that everything that Ten Yad does they do with utmost dignity and respect.

As the show was coming to a close, there was a moment of pure joy when the production crew began to recognize the enormous impact of the event. Moishe Muchnik, from Spotlight Design, and his team who were at the forefront of all auction communication and processing, were amazed with the overwhelming response from Jews from so many different communities who were showing up in support of Ten Yad, and excitedly shared the news with the entire crew.

Yuval Stupel invited Executive Producer Davidi Crombie onto the stage and they, along with the performers, expressed their joy by breaking out into a spirited, spontaneous dance.

Most importantly, through the live auction, hosted by Rabbi Mendel Duchman and Chaim Mentz, funds were raised for Hachnasas Kallah, making it possible for Ten Yad to help every single Kallah who turns to them for help this year.

The unbelievable success of the Tenathon was accomplished thanks to the hundreds of thousands who tuned in and the thousands who bought tickets towards the Ten Yad Auction.

The support of the global Jewish community is what enables us to continue to answer the calls of Kallahs in need, every single day.

It isn’t too late to win big. The Split the Pot is currently holding at over $280.000, and you can still buy tickets at www.grandsplit.com

We hope to see you next year at the Tenathon that will take place in Yerushalayim, with Moshiach!