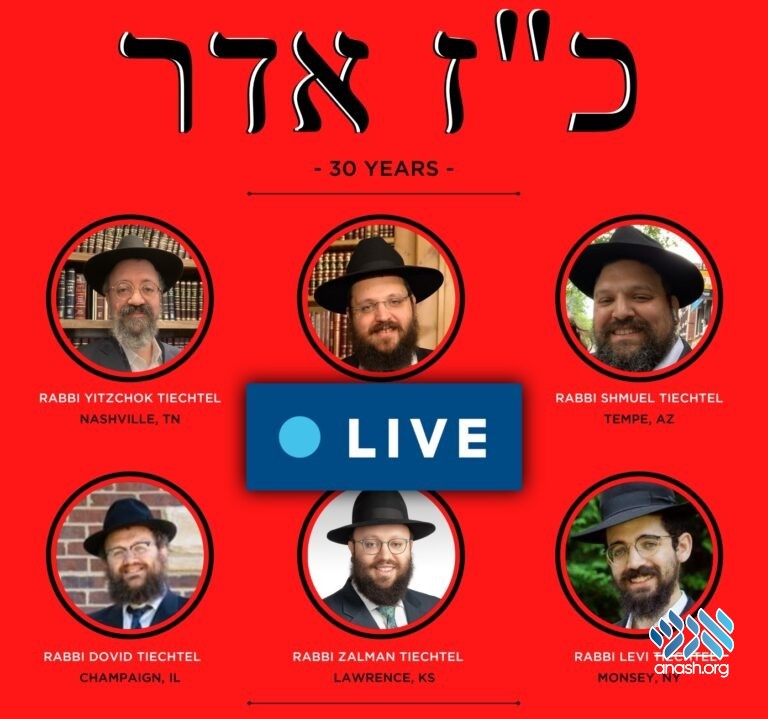 Join Live Sunday night at 8:30 PM ET: In commemoration of 27 Adar I, six brothers, from across the globe, farbreng about what message we chassidim can take from this day.

In commemoration of Chof-Zayin Adar 1 – exactly 30 years to that painful day when the Rebbe suffered a stroke in 5752 – the Moshiach Office at Merkos 302 is hosting a farbrengen for Chassidim worldwide.

Men and women are encouraged to watch the six Teichtel brothers, who dedicate their lives to conveying the Rebbe’s teachings across the globe, farbreng about what message we Chassidim can take from this day.

Seven weeks prior to Chof-Zayin Adar 5752, on 3 Shevat 5752, the Rebbe shocked the Chassidim with unusual words. With extreme emotion, the Rebbe spoke about the Freidiker Rebbe’s later years when his speech was impaired. Just like Moshe Rabbeinu, the first Rebbe in history, who had a speech impediment for which Hashem places Aron, his brother, as Moshe’s spokesman, so too – said the Rebbe – when the Rebbe’s words cannot be heard, the Chassidim must take the place of Aron to carry the Rebbe’s message to the members of the generation.

Seven weeks later, on the day of Chof -Zayin Adar, when the Rebbe ceased (to date) delivering Sichos and Maamorim to our generation, these puzzling words became clear. Today, our greatest mandate is to see ourselves as carriers of the Rebbe’s message to the many who still need to hear it.

The Teichtel brothers will farbreng about our mandate to SHARE the Rebbe’s teachings and perspective with others. Sharing the message is a central piece of adopting a Moshiach Mindset. Although a chossid may apply the Rebbe’s Geulah-view to the various elements of his own life, his Moshiach Mindset is not complete until he is on sharing mode – teaching others what he has learned and bringing Elokus to the areas that still lack it.

Thus, this farbrengen launches the sixth monthly segment of the Moshiach Mindset produced by Tut Altz: Share: Free people free others. This segment is about the imperative to share the Geulah-mindset with others as an integral part of adopting that mindset for oneself!

Join us on Sunday, the night of 27 Adar, at 8:30 PM ET on TutAltz.com/events or on this site to view the farbrengen.