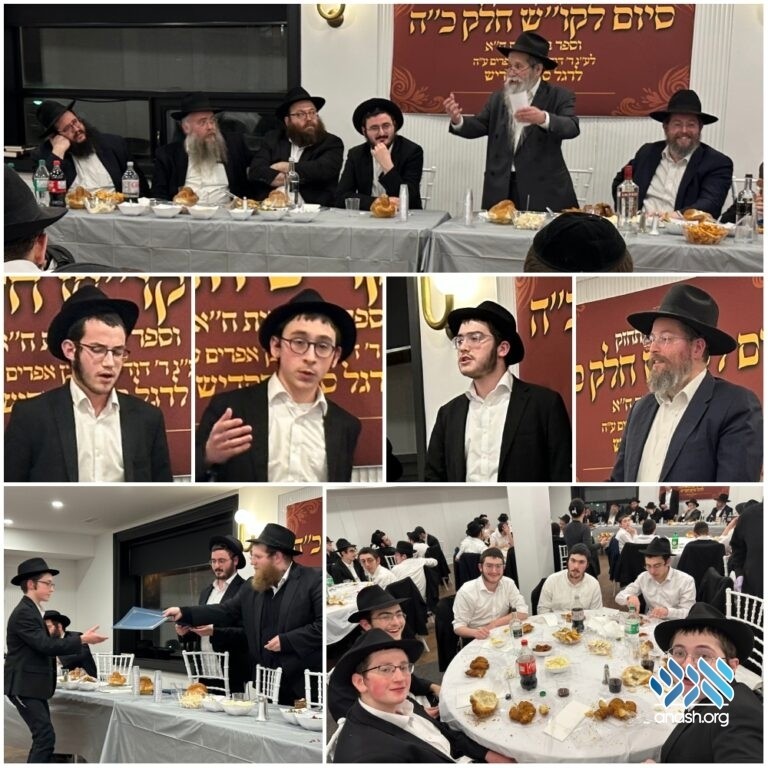 Over 55 bochurim from the Toronto Yeshiva celebrated at a grand chagigas hasiyum in honor of the completion of a full sefer of the Rebbe’s Torah.

Over 55 bochurim from the Toronto Yeshiva celebrated at a grand chagigas hasiyum in honor of the completion of a full sefer of the Rebbe’s Torah.

The bochurim had studied the full volume of Likkutei Sichos as part of a mivtza arranged by the talmidim hashluchim to the Yeshiva. The worked tirelessly to learn and complete Chelek Chof Hei, as well as Shiur Alef learning and finishing Sefer Bereishis of Chelek Alef. They learned the sichos on the parsha each week, and took quizzes.

The siyum was celebrated with great pomp, with the bochurim sitting down to wash for a seudah as befitting for such an accomplishment. One by one, the bochurim chazered each sicha, reviewing sicha by sicha from Chelek Chof Hei, which they spent the last week studying.

The bochurim were addressed by a special speaker, the head Shliach of Ontario Rabbi Zalman Grossbaum, who spoke about the importance of learning the Rebbe’s Torah, and the appreciation the Rebbe had for those that did.

“The event, and especially the learning that preceded it, is a true fulfillment of the Rebbe’s dream, that the world should be taken over through Limud Hatorah, especially Chassidus and koching in the Rebbe’s Torah,” the organizers said.

The event was made possible thanks to a generous sponsor Mr. Oren Antebi l’ilui nishmas his father דוד משה בן אפרים ע”ה on the occasion of his siyum hakaddish.

Even after the siyum the bochurim did not stop, and are continuing to go full force ahead, starting Chelek Chof Vov with full enthusiasm.

“They are fully focused on the goal to finish more volumes of Likkutei Sichos until the very last krach,” the shluchim told Anash.org. “Thanks to the siyum they have the realization that finishing Likutei Sichos is a possibility for each and every one of them. As one Bochur brought out very beautifully that the Rebbe did not spend tireless hours for a nice set of seforim to sit on the shelf and collect dust. They are for us to learn and finish all the otzros the Rebbe gifted us.”