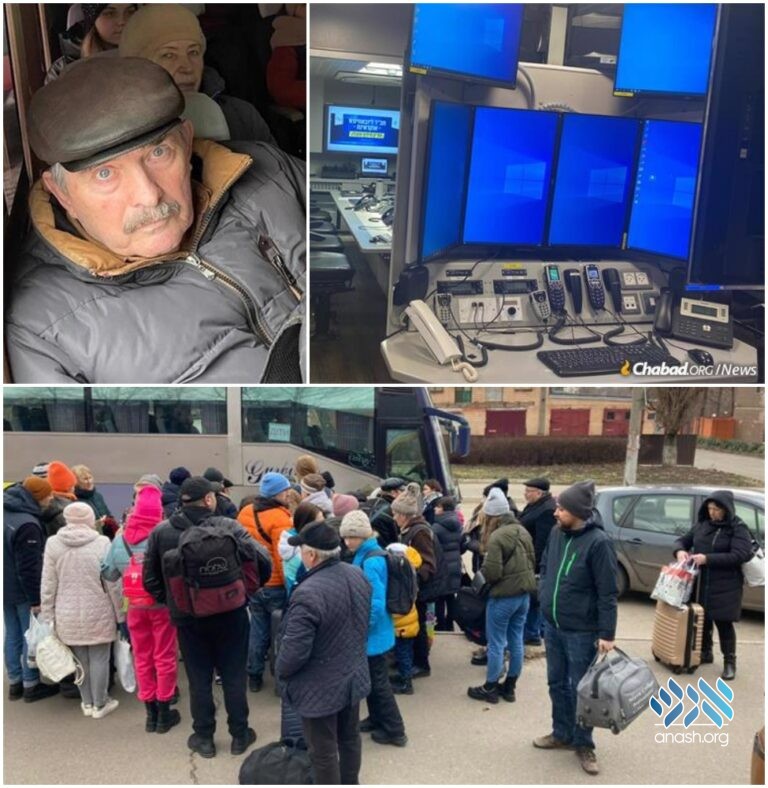 Thanks to coordinated efforts in Kfar Chabad, Ukraine and New York, on Tuesday alone, 54 buses of Jewish refugees from across Ukraine were dispatched to the border, heading to Moldova, Romania, and Poland.

Sitting in the ad hoc crisis center in Kfar Chabad, “Chaim” has been on the phone with Jews in war-torn Ukraine for nearly 14 hours. In call after call, he has been reiterating the same point: “Get out while you can. We will help you leave Ukraine and bring you to Israel if that’s what you want, but you must leave now!”

Sometimes he succeeds, but other times he is met with resistance. Some people cannot bear to leave homebound relatives, some do not wish to leave the comfort of home, and others just don’t believe things will get much worse.

For some, it is too late. It is impossible to leave Kherson, which is in Russian control. The humanitarian situation in Mariupol is even worse. The coastal city is under siege by Russian troops and is being bombarded night and day. Its population of 400,000 is without electricity or water, and food is running out.

Where escape is possible, the numbers of those leaving are growing every day. Chabad-Lubavitch has mobilized a network of buses and rail cars to get people out of the country safely and quickly.

On Tuesday alone, 54 buses carrying Jewish refugees from all over Ukraine have been dispatched to the border, heading to Moldova, Romania, and Poland, where they are housed in refugee camps until they are assisted in relocating toward Western and Central Europe or placed on chartered flights to Israel.

The buses are often staffed with armed security guards and generally can cost up to $20,000 per trip.One trip, which brought a busload of orphans and support staff to Germany, cost $40,000.

In some instances, buses are commissioned but are then unable to reach the dispatch depot (most often the city’s Chabad center) due to fighting. And in other cases, it is deemed too dangerous to leave the city. But no matter what the difficulty, no one is giving up. They just try again.

As a result, day after day, busloads of people are brought to safety by Chabad emissaries, some of whom are still in Ukraine and some of whom have stationed themselves in bordering countries or even Israel, where the command center has been set up in conjunction with Israeli aid organizations.

Thus far, an estimated 185 coach buses and 300 minibuses have carried 15,000 Ukrainians to safety, and an additional 7,200 have been transported by train.

Many of the buses (as well as the food and shelter provided to the refugees) have been paid for by the Ukraine Jewish Relief Fund, which has raised $2.3 million in online donations, coupled with several million dollars from major donors and organizations.

The work is expected to continue as long as necessary, and organizers are lining up buses for an expected 250 trips over the next ten days, with the understanding that the situation remains fluid and the shifting facts on the ground may severely impact their work.

For his part, Chaim and his peers at the call center are continuing their work unabated. “There are lives to be saved, and there’s no way we can live with ourselves if we don’t do our best to help everyone we come in contact with!”