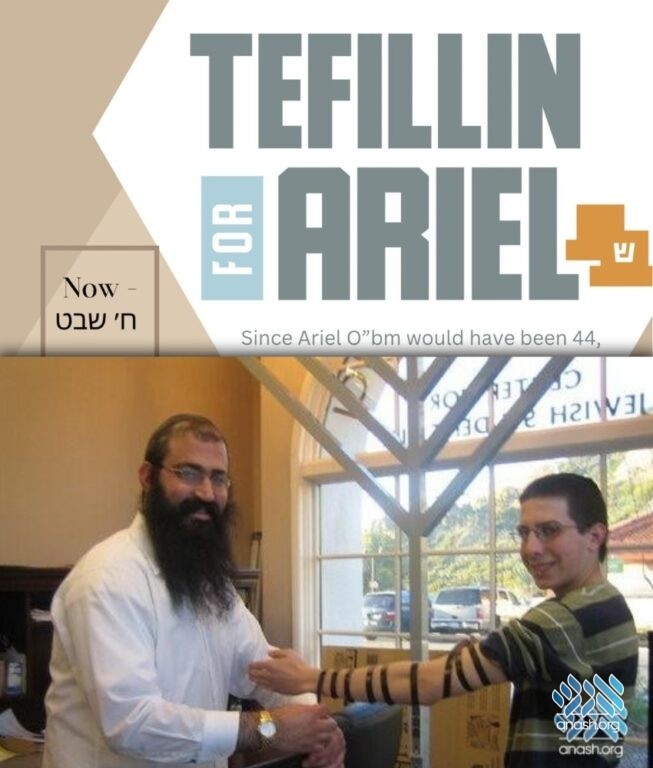 The family of Rabbi Ariel Rav-Noy a”h is launching a campaign to do 4,400 mitzvos in his memory to mark his upcoming 8th yahrzeit.

Eight years ago the Rav-Noy family was struck with a tragedy that shook Los Angeles and the world at large, with the passing of Rabbi Ariel Rav-Noy, beloved shliach and father of 7, on 8 Shevat, 5775.

As his 8th yahrzeit approaches, the family has come together once again to launch a mitzva campaign in his memory.

“Being that Ariel would have been 44 years old, we’d like to get 4,400+ tefillin by the yahrzeit this Ches Shevat,” the family told Ansh.org.

“One of the biggest motivators behind this was Ariel’s love for each and every Jew. One of his greatest pleasures was wrapping tefillin on another Jew. Whether it was while on shlichus in Pennsylvania, or Camarillo, CA or Chabad Persian youth in LA, the love and care he showed is a legacy we’d love to pass down for generations to come.”

Wrapping tefillin with someone is so simple but can have such a profound impact, let’s allow his legacy to live on through us.

Join up and let’s bring each other together through Wrapping Tefillin or Neshek! Just give out neshek or wrap tefillin, take a selfie, tag location on Instagram @tefillin_king or WhatsApp to +1-323-842-3368.