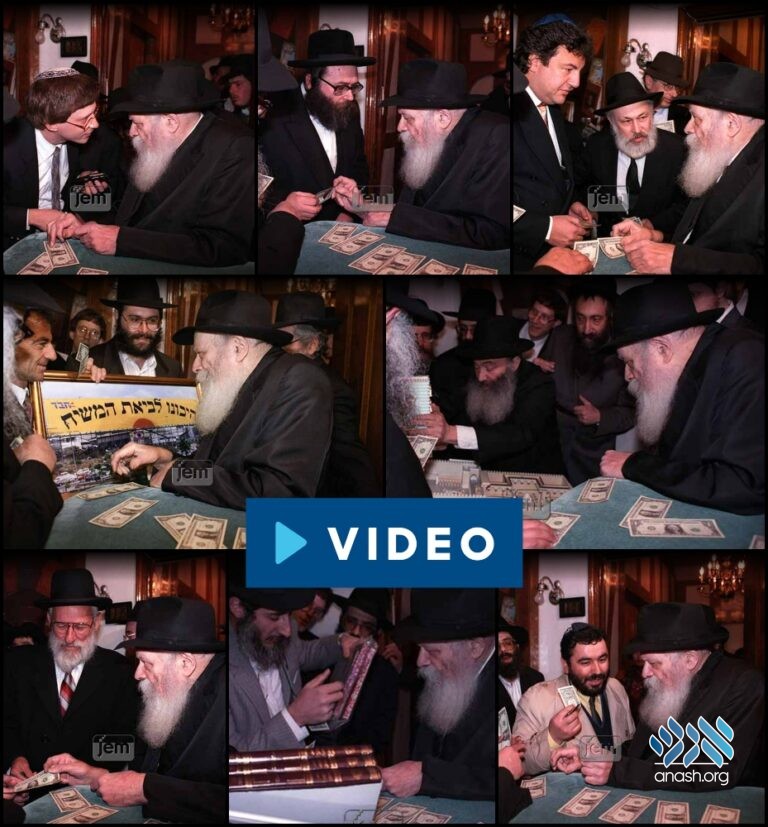 Exactly 30 years ago today, on 26 Adar I 5752, was the last time the Rebbe stood on his feet and personally distributed dollars to chassidim and Yidden from all walks of life.

As he would every Sunday, the Rebbe stood ready to give dollars to a growing line in 770. But on this Sunday, the 26th of Adar 5752, for the first time ever, the Rebbe asked how long the remaining line was, providing a small clue that all was not well. The distribution continued until 7:30 that evening!

The next day, Monday, 27 Adar I, the Rebbe had a stroke while at the Ohel. Since then, Chassidim await the day that the Rebbe will return in his full strength and lead us out of galus, may it be bekarov mamosh!

At 2:00 p.m. the Rebbe entered Gan Eden Hatachton to daven mincha with a small minyan, then distributed coins for tzedakah to all those present and allowed two chassanim to use his siddur.

In the meantime, a large crowd had gathered to see the Rebbe that Sunday. In addition to the usual mix of individuals who regularly came to receive Sunday dollars, there were several large groups of guests that had come to the Rebbe for Shabbos and would pass by to receive his bracha before returning home.

There was also a sizeable group of Vizhnitzer Chassidim who had come for dollars that day. The Vizhnitzer Rebbe from Israel was making a family simcha in the United States at that time and many of his Chassidim who came to New York used the opportunity to visit the Rebbe and receive his holy blessing.

Some excerpts of conversations with the Rebbe during this final distribution dollars:

Rabbi Avrohom Hecht introduced his grandson to the Rebbe, informing the Rebbe that his grandson’s birthday had been the week before.

The Rebbe (handing two dollars): He should be a yorei shomayim, chossid and lamdan. Which grandson is he?

Rabbi Hecht: He is from California.

The Rebbe: He learns in California?

Rabbi Hecht: No, he learns now in Morristown.

The Rebbe (handing an additional dollar): Hatzlocha rabba in Morristown. You should participate in writing in the “Haoros Hatmimim” that they produce in Morristown.

A supporter of Chabad in Edgware, England approached the Rebbe and said:

“Three years ago, you gave a blessing for my son to be born and he was born. Thank you very much.”

The Rebbe: “May G—d Almighty bless you and thank you for returning to me besuros tovos, – not everyone is doing so.”

Rabbi Krinsky approached the Rebbe with an editor of the New York Post.

The Rebbe: “Circulate the letter that the Moshiach is coming very soon. He’s not only coming, but he’s on his way!’

A Chossid (not a Lubavitcher) approached the Rebbe and asked a question: The Tzemach Tzedek writes in Shoresh Mitzvas Hatfilah (117a) that one should not recite the parts of davening that request of the angels to petition from Hashem on our behalf. Why then do we find that the custom is to recite them?

The Rebbe: “It is surprising that you would ask such a question when the Tzemach Tzedek himself already offers the explanation, and it has already been printed (Hagahos to Torah Or, Ner Chanukah). We are not davening to the angels, rather we are asking of them to serve as messengers, bringing our requests up to Hashem.”

To an individual who said to the Rebbe, “Rebbe, I need a recovery!” the Rebbe responded: “In a good time. B’suros Tovos. May you have long and healthy years.”

“Thank you for the Gift!”

To a famous Russian artist who told the Rebbe that he is working on drawing a picture of the Rebbe in honor of his ninetieth birthday, the Rebbe responded (in Russian):

“Blessing and success. Thank you for the gift. This [the extra dollar] is for your entire family.”

A father who passed by with his young son asked the Rebbe for a bracha that his son grow to become a talmid chochom. The Rebbe replied: “He should become a chossid as well! Don’t forget…”

The Rebbe: “Because the number of this year is הי’ תהא שנת נפלאות בתוכה בכל.

May we merit to be reunited with the Rebbe very soon!

Click here for an album of 4,000 pictures from the last ‘dollars’.

VIDEO: Watch beautiful highlights of this last “Sunday dollars” with the Rebbe to date.