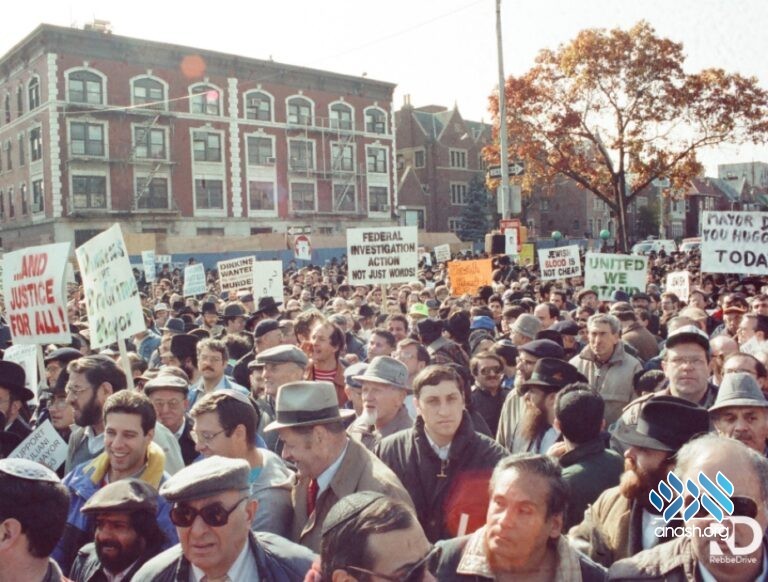 OpEd by Mrs. Tamar Adelstein: This week marks 30 years since the Crown Heights riot, and the false narrative told at the time just keeps on being repeated. Perhaps the time has come to lay out the facts.

By Mrs. Tamar Adelstein, coordinator of Crown Heights Women for the Safety and Integrity of Israel:

It is not surprising the false narrative written about the Crown Heights Pogrom is being told once again as we observe its 30th anniversary, today, on August 19th.

From the Southern Poverty Law Center’s “study” to the public officials who tried to excuse their actions to some major Jewish organizations who forgot what they were there for to sadly some in the local community, a fiction was created (that unfortunately has sold well) that had there been “communication, mutual understanding and respect” by the Jews in Crown Heights, the “riots” would not have happened.

I and my family were victims of the pogrom. I was also the founder of Crown Heights Women, a group formed, providentially, at the beginning of August that summer in response to a series of frightening incidents in which Jewish women had been brutally attacked in their homes and many others were being followed outside as they walked to and from their shopping or bringing their kids to and from camp.

There were also Jewish women who reported bullets flying through their windows from drive by shootings between street gangs – all of which the 71st Precinct was thoroughly apathetic to.

For the record, none of these criminals were Chabad Chassidim.

After getting scores of signatures from Jewish women across Crown Heights on a petition I created demanding the police better patrol the neighborhood and take our concerns seriously, a very nice Community Affairs officer was assigned to work with me.

When the above officer and I met sometime after the pogrom, we could only shake our heads in disbelief at the turn of events.

Tragically, the pogrom interrupted our efforts, that were all but forgotten, until six months later when the stalker, Romane LaFond, viciously stabbed to death my friend Pesha Leah LaPine.

Let us be clear, the pogrom was not the result of my, my family’s or my fellow Jews in Crown Heights lacking good communication skills, empathy, or respect for our Black neighbors. Nor was it a lack of sympathy or feeling on our part for the tragic death of little Gavin Cato.

Claims otherwise are an affront to the memory of the Jewish lives lost that week.  Assertions that the Jewish community in Crown Heights bears equal or any responsibility for the “riots” is simply wrong and callously disregards the trauma our community, collectively and individually, endured at that time and afterwards.

Malevolent demagogue Al Sharpton, who was given a free pass throughout David Dinkins’ administration to foment and carry out anti-Semitic acts without repercussion.

Our “neighbors”, men and women, living in Crown Heights. The myth that all of the “rioters” were from outside the neighborhood is a lie.  I will never forget the site of women on my block running home to get their umbrellas just after Al Sharpton gave the proverbial order to charge! at 2pm when it started to rain on the first day of the pogrom.  After all, no reason to ruin your hairdo while you’re busy ruining other people’s lives!

An apathetic if not antagonistic 71st Police Precinct with an attitude that the Jewish community in Crown Heights was, for the most part, expendable.

Anti-Semitic Mayor David Dinkins and his equally anti-Semitic Police Commissioner Lee Brown who together, intentionally, held police back from fulfilling their duty to quell the pogrom.

Dinkins’ publicity stunt at the hospital where Yankel Rosenbaum was taken also contributed to a delay in properly treating his mortal wounds.

Governor Mario Cuomo, who played politics with our safety and welfare, waited far too long before sending an aide to warn Mayor Dinkins that he would send in state troopers if he, Dinkins, would not order the police to stop the pogrom.

President Bush whose tightly sealed lips would not call out the National Guard to restore law and order and protect us.

District Attorney Charles Hynes’ who refused to indict Sharpton for his anti-Semitic incitement or his leading role in carrying out violence against our community.

Neither Sharpton, nor his cronies nor the vast majority of the frenzied, wild mob were ever arrested or brought to trial.

Mrs. Bracha Estricher, HY”D, an elderly Holocaust survivor who lived alone in a building not half a block down from the corner of President and Utica where Sharpton stood for hours on end chanting No Justice, No Peace, using despicable anti-Semitic hate speech, whipping up the crowd into a wild mob.

When the pogromists broke into Mrs. Estricher’s building and began pounding on her door, she panicked and sought to escape by jumping out her window but instead fell tragically, horribly to her death, HY”D.

My friend’s unborn baby whom she miscarried after being chased by one of the mobs in full view of the police who would not come to her aid.

Anthony Graziosi, an Italian man who was mistaken for a Jew and murdered by a mob on September 5th not far from where Yankel Rosenbaum was stabbed.

The community’s children coming home from sleepaway camp on the first day of pogrom were abruptly thrust into a shocking scene of chaos, danger, flames and utter lawlessness.

The community’s children from babies to teens who had to hide or lay low while mobs rampaged down their streets.

For the adults, our trust that a pogrom would never happen here in America, especially in New York City, was completely broken.  Our belief that in America the police would protect us was shattered. Our faith in the justice system was destroyed.

When the community’s class action lawsuit was brought to court, those victims who testified (and not many were given the chance to do so) faced an unsympathetic and pompous magistrate.

Finally settled in 1998, Mayor Guiliani did not keep his promise to hold a press conference with all of the plaintiffs when he apologized on the City’s behalf but instead chose only a very select few.

As to the award, 1.1 million dollars for 91 victims including Yankel Rosenbaum’s estate was neither fair nor commensurate with the ordeal we went through.

Especially, when the very next day, it was announced that Pierre Regis, another “victim” of the event, was awarded 3.3 million dollars by the City.

On the night of August 19th, Regis tried three times to run over the police standing at the corner of President and Utica with his car until he was finally stopped after which the police roughed him up for trying to kill them.

Whether or not there was merit to his case, his lawsuit was deliberately kept quiet by the City, knowing we Jewish victims would have raised a justifiable storm over the obvious discrepancy between verdicts and compensation.

And, yes, the money matters because that would be the only penalty paid by New York City and its leaders to whom our safety and rights did not matter.

Looking back, I regret not joining Norman Rosenbaum when he asked me to drop out of the lawsuit and sue the City separately with him.

That there were not more Jews murdered or wounded.

That there was not even greater property damage.

That we have recovered physically and, overall, emotionally.

For our family, personally, we were zocheh to amazing miracles during the pogrom including one that spared my youngest child at the time from severe injury after a beer bottle, thrown through the window she stood in line with, came crashing through. Miraculously the bottle fell at her feet and not a shard or sliver of glass touched her!