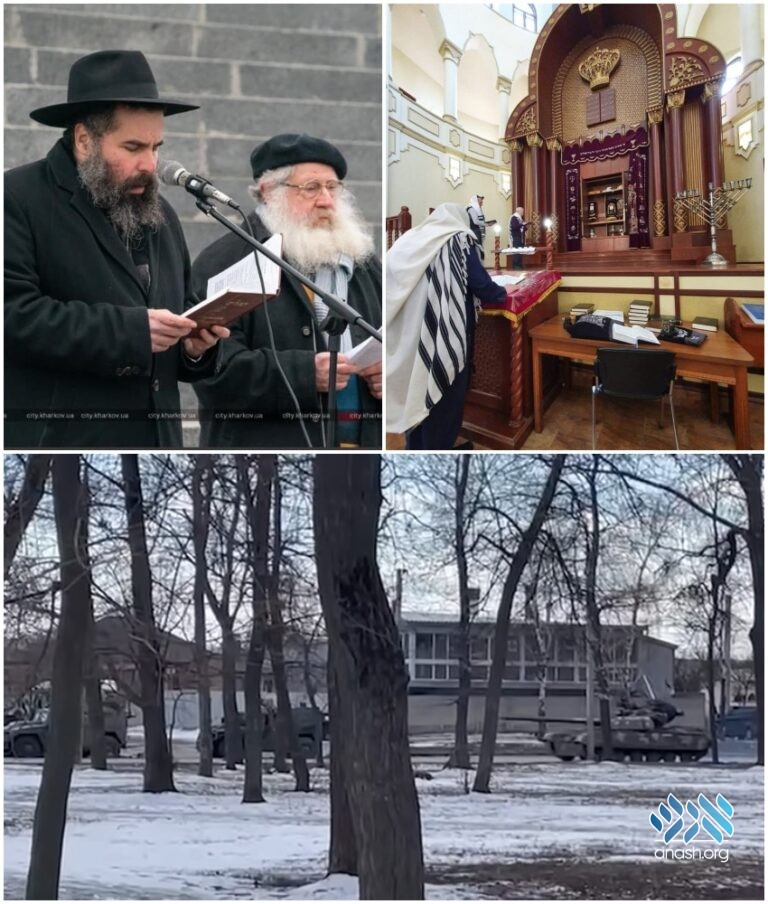 Shlucha to Kharkov, Ukraine Mrs. Miriam Moskovitz shares moments from an unforgettable Shabbos in Kharkov, where over 100 people gathered in the basement of the shul as Russian bombs fell on the city.

It says that you’re not supposed to cry on Shabbat, I failed that three times this Shabbat.

The first time, was on Friday night when we managed to get to the synagogue. After the prayers, we went downstairs for a Kiddush, filled with people who were brave enough to come, and the many people who have been living in the synagogue since the war started. After Kiddush we started singing “Nyet nyet nikovo”, a Russian melody that there is no one that we should fear besides Hashem alone.

The second time, I wasn’t able to hold it in, was Shabbat morning, when we blessed the new month of Adar, saying “Mi sheasa nisim l’avoseynu – Who did miracles for our Fathers”, I again felt the tears in my eyes. We also need miracles…

The third time was after the prayers, we have a beautiful tradition in our which the President of our community, Alexander Kaganovsky, gives blessings to people who have birthdays and special events in the community.

Today, he asked everyone to be quiet, and said: “Reb Moishe, I want to tell you in the name of everyone in our community, that we want to thank all of you shluchim who have stayed behind to be together with us. We now see that all of what you have been saying all these years that you are one inseparable part of the community is true”. He finished, with a beautiful big hug.

Another beautiful thing about Shabbat is we didn’t have our phones and weren’t able to check the news. We have received hundreds of Whatsapps and emails from people all over the world, who are concerned and praying for us, who want to know how we’re doing. Our poor families all over the world, who want to be reassured that we’re doing fine. But on Shabbat our phones were put aside as we lit the Shabbat candles, praying hard for peace everywhere.

There are three moments that I’d like to share, that I wasn’t able to capture of course:

The first beautiful moment was after the Shabbat meal in our house, with my family and grandchildren here. They all put on Purim costumes and put on a skit and danced. My daughter Malka explained to me after their happy dance that she knows why we are all sleeping downstairs together in the basement which is our shelter “In the times of Purim, Haman said that the Jews were spread all over and not united…so we have to sleep all together to show we are all one.”

Another special moment was during the Mussaf prayer. My son, Yossi, was davening. When he started singing “Hu Elokeinu”(He is Our G-d) there were loud sounds of the bombing that is taking place on the outskirts of Kharkov, as they are trying to enter the city. As he was singing, we heard the booms, the davening was getting louder and louder, so we could drown out the sounds. Definitely an unforgettable prayer.

Then we had an amazing Shabbat meal downstairs together there was no need for words, or to say anything inspiring. All of us together, over 100 people sitting in the basement of the synagogue which we are currently using as a shelter, including the people who have been sleeping in the synagogue for the past couple of days, joined together in song.

Hard to choose just one moment from the hours we shared together…the man from Kramatorsk who had fled to Kharkov in 2014, thanking us for staying and with prayers that the community should only continue to be stronger….and every one hand in hand singing “hinei ma tov” …and the standing ovation for the cooks who have also moved into the syna to be 24/7 available to feed everyone who is coming in…from the refugees from Donetsk with their children to the old man who is scared to be alone on the fifth floor.

Special moments and definitely a Shabbat I won’t forget.

A Shabbos full of faith, unity, and lots of hope for only very good times ahead. Shavua Tov.