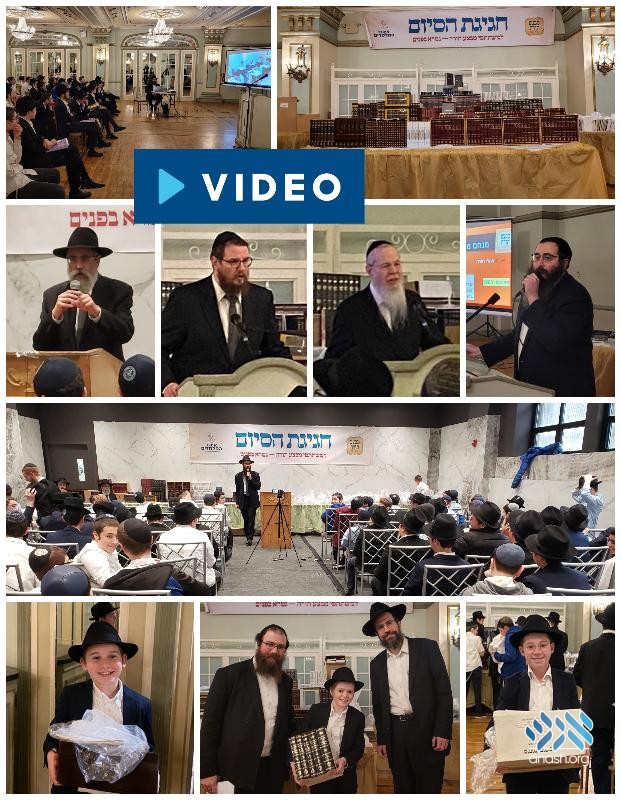 Appreciation poured in from teachers and students alike, who gathered to applaud last years’ finalists of the notable Gemara Bifnim program under the auspices of Lubavitch Chinuch Organization Igud Hamelamdim.

Hundreds of boys gathered for the novel celebration, marking the completion of last year’s (5780) commitment to mastering the skills of In-Text Gemara learning.

The celebration was especially unique since – due to Covid closures – it took place now in the middle of the year, thereby giving the students of this years’ cycle a tremendous boost in their current learning. Seeing the reward for their efforts significantly boosts them to continue even stronger!

Oholei Torah dean, Rabbi Hershel Lustig, addressed the boys of Oholei Torah emphasizing the potential every boy has when exercising learning Bifnim. Dean of ULY Crown St., Rabbi Yosef Simpson, addressed the boys of United Lubavitcher Yeshiva emphasizing the power of Bifnim, visual learning vs. auditory learning. Mivtza director, Rabbi Yehuda Leib Aronson, encouraged the boys to use the rest of this year to its fullest.

These were three separate events hosted by Igud Hamelamdim for the different Schools of Crown Heights: Two events for two divisions of Oholei Torah, and another event at the newly renovated Lubavitcher Yeshiva small hall.

Principals Rabbi Yehoshua Lustig, Rabbi Chaim Yisroel Willhelm of Oholei Torah, and Rabbi Yosef Wolf, of United Lubavitcher Yeshiva, profusely thanked Igud Hamelamdim for all the energy and devotion to the students with this mivtza. The principals proceeded to lead the procession of awarding the Prizes to the students. The screen, projecting a PowerPoint throughout, added color to the environment. A beautiful video clip of the mivtza was also shown.

Gemara Bifnim, a project of Crown Heights based Chinuch organization Igud Hamelamdim, is now in its fourth year and operates in 33 classrooms (grades 6,7,8) across the US and Canada. Many schools that are eager to join have been placed on a waiting list as the program makes plans to expand.

“While being able to read the Gemara inside is assumed to be basic to learning Gemara,” explains Rabbi Avrohom Bluming, the director of the organization, “the reality is that it is becoming a growing challenge. Children nowadays are finding it ever more challenging to focus on words on a page, and it really hits them hard when they enter yeshiva. We came up with a revolutionary way to give the children these fundamental skills in an exciting manner.”

The innovative program has grown to include five elements to maximize comprehension and retention: (1) Educational tests are given as a means to guide the student in deciphering the text. (2) Back Chazara is a rigorous review system that has the students constantly reviewing what they’ve learned so that it remains with them. (3) Yegiah awards points for effort, an important part of learning which should be recognized and emphasized.

The final two elements involve building consistent review habits: (4) Daily Chazara Phone System allows students to record themselves for 5 minutes each day, and (5) Shabbos Chazara requires them to review the Gemara they learn each week with their father or another adult.

Every three weeks, each class took a written test on all of the material covered. Boys were given a Gemara to look inside of, and questions were focused on deciphering the Gemara’s give-and-take. For each question answered correctly, the boys earned points towards prizes at the end of the year.

For information on the program, visit: IgudHamelamdim.org/Gemarah-Bfnim-Mivtza-Torah