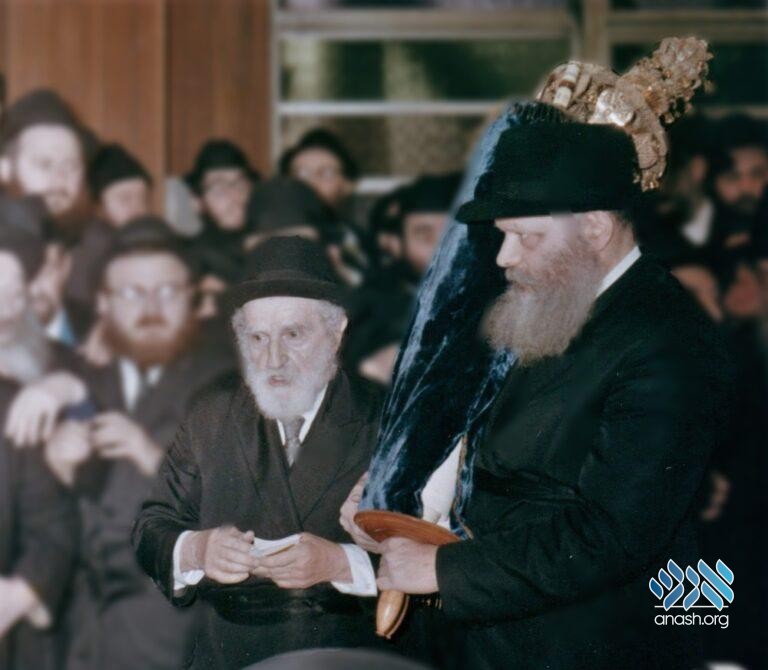 29 Kislev is the Yahrzeit of Harav Hachosid Reb Eliyahu “Yaichel” Simpson a”h. Rabbi Simpson was a chossid and mekushar to three Rebbeim, and was called a “neeman bayis” by the Rebbe.

Written by a grandson of Rabbi Simpson for Anash.org

Rabbi Simpson studied in Tomchei Tmimim in Lubavitch for over 13 years, where he was from the primary chozrim of the Rebbe Rashab and his devout chassid and mekushar.  When the Rebbe was sent the proposed language for the matzeiva of Rabbi Simpson, the Rebbe added the words “meroshei chozrei Dach – Chasidus – biLubavitch”.

Attached below is a copy of the letter of the Rebbe Rayatz specifying such appointment – his family name in this letter is Yaichil, it was changed to Simpson when he arrived in America.

When Rabbi Simpson was sent an invitation and visas from family members who were then in America to move to America he asked the Rebbe Rayatz and the Rebbe Rayatz answered him that he should go “al minas lihachzir” – on condition he returns. The Rebbe Rayatz explained that he means “lihachzir nishamos liAvinu Shebashamayim” – to return souls to their Father in heaven, which was Rabbi Simpson’s primary focus for the rest of his life.

Following the Frierdiker Rebbe’s passing, Rabbi Simpson became a devout chassid and mekushar of the Rebbe, from the moment of the histalkus. He was very instrumental in beseeching the Rebbe on Behalf of the Chasidim to accept the nesius.

The Rebbe appointed Rabbi Simpson as a shadar – personal emissary – and he would travel on the shlichus of the Rebbe to communities in the United Sates to make a hisorurus to strengthen Yiddishkeit and for maamad.

In 5730, when the Rebbe decided to complete Mashiach’s Sefer Torah and gave Am Yisroel the opportunity to participate by buying letters, he appointed Rabbi Simpson to be in charge of the selling of the letters and organizing the siyum, which took place on Yud Shevat of that year.

Rabbi Simpson had a minhag that every night of Chanukah, after he lit the Menorah, he would sit down and watch the licht while learning Sharei Orah of the Mitteler Rebbe. Also, he had a interesting minhag, that every day, in addition to saying a Kapital Tehillim for his age, he also similarly learn every day a Perek Tanya corresponding to his age.