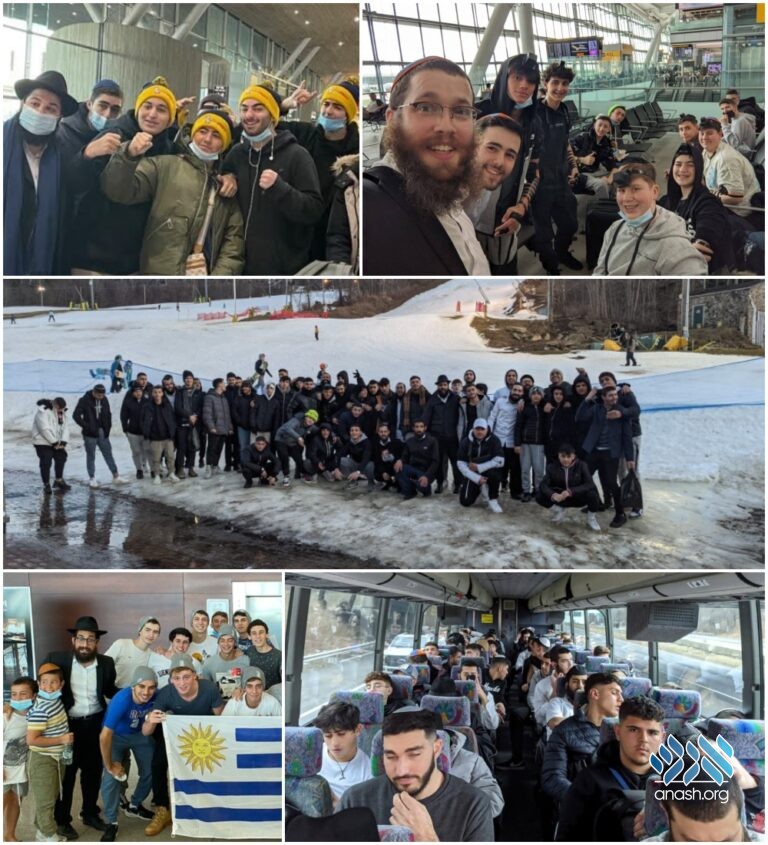 Groups of teens make their way from twenty-six different countries to Crown Heights, traveling with their CTeen rabbis and rebbetzins for what promises to be a life-changing Shabbos and weekend.

Allan Feldman walks through the gleaming terminals of San Francisco International Airport. At the gate, he greets friends he’s made at his CTeen chapter in Pleasanton, California, with a hug, and the teens pose together for a selfie. He’s off to join 2,500 Jewish teenagers at CTeen’s 14th International Shabbaton in Brooklyn, New York.

For Allan, who attended last year’s virtual Shabbaton, being back in person is a chance to catch up with new peers that he’s only seen online. It’s his third time attending the Shabbaton. “For me, it feels like I’m continuing a tradition,” he says.

The same scene has played out in dozens of airports worldwide, from Morocco and Italy to Uruguay and France. Some groups pose with flags; others laugh together and catch up. On Wednesday and Thursday, Jewish teenagers from twenty-six different countries are converging on Crown Heights for what promises to be a life-changing Shabbos and weekend.

This year is the first time delegations of teens from Argentina and the Dominican Republic will join the Shabbaton. And boy, are they in for a good time! The program accommodates three different languages, with a separate Friday-night meal for French speakers and farbrengens in Spanish and French.

Teens will tour the Big Apple, visit the Ohel, and experience thrilling trips on Friday and Sunday. Over Shabbos, the two and a half thousand boys and girls will enjoy dozens of workshops on the power of being Jewish wherever life takes them.

Spread across massive ballrooms throughout the Crown Heights neighborhood, the programming is set to feature transformative stories that provide real-life examples of what it means to be Jewish “Wherever, Whenever.”

Documentary filmmaker and foreign correspondent Shloime Zionce will share what it’s like to shop for kosher food in Saudi Arabia or live as a ‘Mountain Jew’ high in the Caucasus Mountains. For years he’s been traveling the planet, from Afghanistan to Azerbaijan, and reporting on Jewish life in remote, far-flung locations. He’s set to speak about being “Jewish (Literally) Wherever.”

Other workshops will stress the transformational power of Jewish identity, illustrating its ability to serve as a source of strength while facing some of the darkest challenges of life. Author Chana Margulies will share some of the challenges she faced during her battle with cancer and how Judaism helped her turn a painful challenge into a catalyst for growth. Youtube creator Berel Solomon will tell how he left behind a life of drugs, and a reality TV show, to find meaning as an Orthodox Jew. These are just a tiny sampling of the inspirational stories and game-changing messages going to be shared over the Shabbaton.

Throughout Shabbos, teens will reunite with old friends from CTeen’s summer Heritage Quest trip and the CTeen Xtreme adventure camp. There will be plenty of time to hang out in the Game Lounge and get to know fellow Jewish teens from around the world.

“I’m so grateful to be back on the Shabbaton,” says Yair Shpiler from CTeen of Machon Chai, Toronto, Canada. In the months leading up to this, he’s been enthusiastically urging his friends to join the Shabbaton. “My chapter has a large group coming, and I’m thrilled that our future leaders can experience the inspiring weekend,” he says.

For Rabbi Mendy Kotlarsky, director of Merkos 302 and vice chairman of CTeen, the incredible growth of the Shabbaton means a new generation of proud Jewish leaders is in the making. “We’ve received countless stories from teens and Shluchim that demonstrate the power the Shabbaton has to form a strong Jewish identity,” he says. “Teens come home with a massive cache of positive Jewish experiences and friendships.”

If past years are any indicator, thousands of teens will return to their communities eager to bring their Jewish identity with them, wherever and whenever they go.