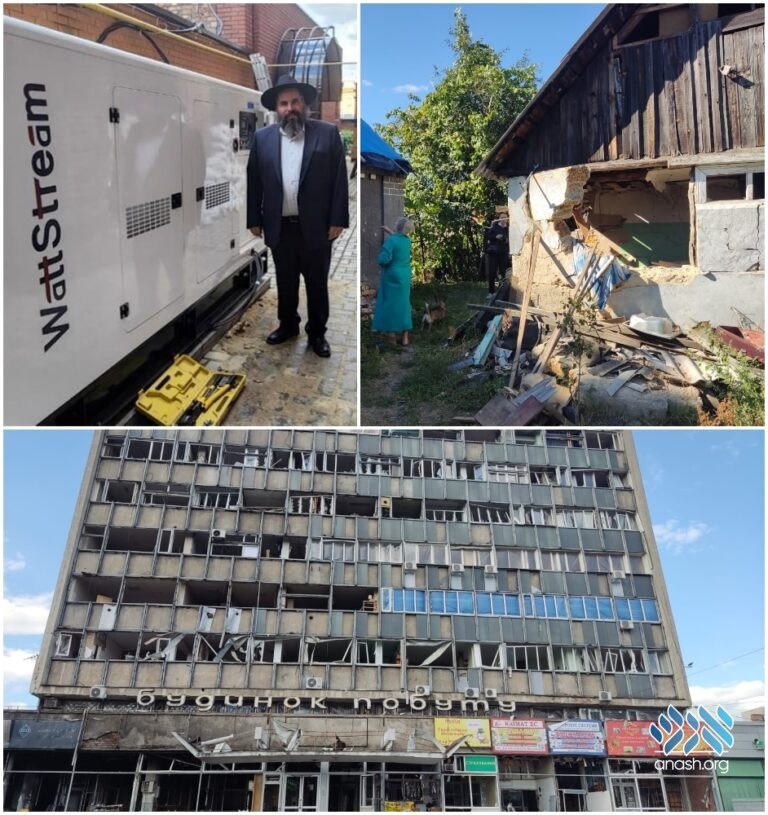 Ukraine marked last week 250 days since the outbreak of the war with Russia – and the biggest concern is the lack of electricity and gas as winter approaches. Shluchim are doing what they can to help.

Ukraine marked last week 250 days since the outbreak of the war with Russia – and the biggest concern is the lack of electricity and gas that has already been felt in the capital Kyiv and in almost every city across Ukraine. This comes after recent weeks during which the Russians have increased their attacks on civilian infrastructure, including power plants that produce electricity – including in cities in western Ukraine that have not been subjected to missile fire until now.

Winter is already well felt in Ukraine and this week the temperature in some cities is expected to reach 0 degrees Celsius and even a few degrees below zero.

According to Rabbi Shalom Gottlieb, the city’s rabbi and Chabad shliach in Mykolaiv, which is constantly bombarded and partially cut off from electricity and water, “We are getting ready and preparing for a challenging winter. We will provide a lot of stoves and wood for heating, because in many shelters the regular heating does not work and they use stoves with wood. We are working on the purchase and supply of generators, because there are already electricity failures.”

“At the same time, we help people with debt payments to the local electricity company, so that they can be connected to power again and they can warm up. We will also provide lots of blankets and winter clothing to help keep people warm. A team from the community is going through the houses of the city’s Jews and repairs their window panes that were shattered by the bombings, as well as doors that were dislodged – and this is also to prevent the cold from getting inside,” he said.

Chabad shliach Rabbi Shaul Horowtz, Rabbi of the city of Vinitsa, is also doing his best to get generators. His challenge is twofold: besides trying to get hours of light and electricity for his private homes, the community center and his shul, he also houses dozens of refugee families in the Or Avner Jewish school in Vinitsa. “We are trying to get generators, because there are many power outages here. Our goal is to bring as much light as possible and especially heating so that people don’t freeze.”

The “Federation of Jewish Communities of Ukraine”, which brings together the 180 Jewish communities in the country, says that this is indeed one of the biggest challenges since the outbreak of the war.

“We are marking 250 days since the outbreak of this terrible war, in which thousands of innocent Ukrainians lost their lives and it seems that it is far from over. We have passed so many challenges and difficulties, but the challenge of the harsh winter in Ukraine without electricity gives us sleepless nights and the fear is that we will not be able to provide an answer for everyone. We are trying to help the shuls and community centers in purchasing generators and our representatives are doing difficult logistical work and making purchases in all the countries surrounding Ukraine because we cannot to find generators here. The fear is that many will die from cold, G-d forbid,” says Rabbi Meir Stambler, chairman of the “Federation” and a Chabad shliach.

According to him, “Recently we have been dealing with this issue round the clock and are appealing to foundations, organizations and private individuals around the world to please help us, and in Israel there are already organizations that have shown a desire to help and we thank them for that.”

According to the Federation’s CEO Alina Teplitsky: “Obviously, we will not be able to distribute a generator to every Jewish family to heat their home, but over the next few weeks we will distribute to tens of thousands of Jewish households special portable chargers that have plugs for connecting electrical appliances – so that they will have a few more hours of heating and light. We will also distribute stoves, blankets and warm clothing – and we will be happy for any donation to purchase the equipment and pass it on to the Jews of Ukraine.”