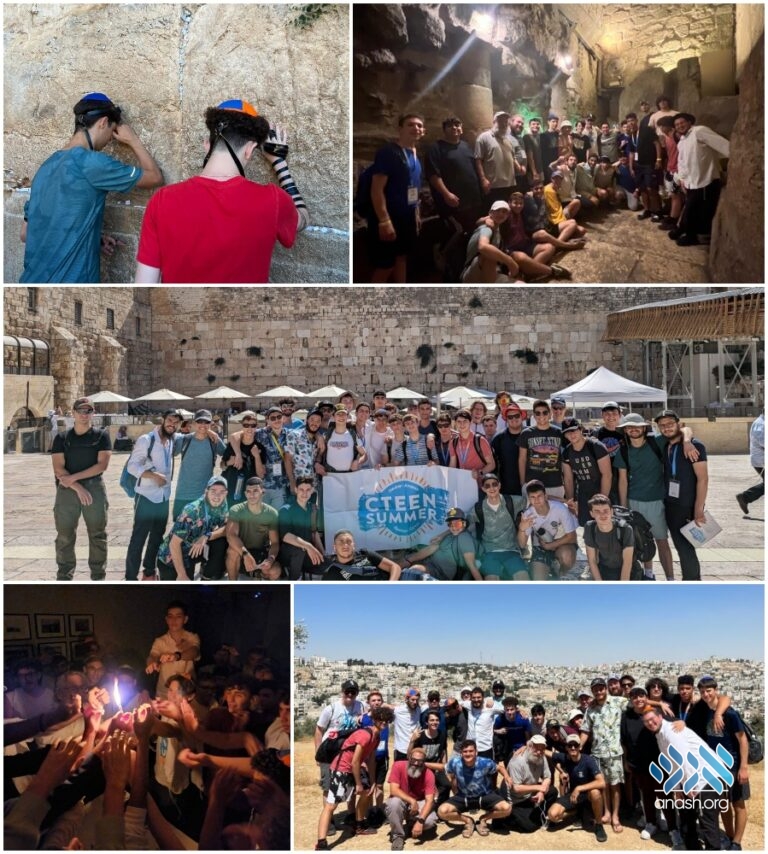 Hundreds of Jewish teens from communities around the world spent this past Shabbos in Eretz Yisroel as part of seven different programs offered by CTeen Summer.

After many months of preparation, over 250 teens spent this past Shabbos in Eretz Yisroel. CTeen summer has brought seven different groups of Jewish teens from communities around the world to experience our holy land up close. While similar teen trips have been made in the past, something on this scale is a first for Chabad.

Accompanied by a group of dedicated and trained staff and a senior CTeen Shliach, each busload of teens develops a truly special connection. Over the 22 days spent together and the many memorable moments they encounter, the bond created is impossible to replicate. Previous summers have produced lasting friendships and a deep sense of family amongst everyone on the program.

“Each teen has a background, a story, and their own reservations about joining such a trip. Months of hard work were invested into including each of these teens,” explains Rabbi Nachman Rivkin, Director of CTeen Summer. “Only with the extraordinary efforts of the local Shluchim was an accomplishment of this magnitude possible. Seeing and hearing the stories from the staff and teens reassure the Shluchim that their efforts were worthwhile.”

Many additional CTeens were enabled to join the trips by a special fund established by Rabbi Bentzi Lipsker of the Keren Meromim Foundation, as well as The RootOne initiative, which generously provides financial support for North American teens to travel to Israel during the summer.

The teens have been spending their trips connecting to the land from various angles.

Sightseeing, touring, and visiting the many Mekomos Hakedoshim showcases Israel’s beauty while bringing our history to life. The trip has also seen teens volunteering in soup kitchens and the like, contributing to daily life in Israel. Daily learning sessions and educational stops throughout the journey provide context and background to all they have seen.

Coming from communities and schools with limited Jewish exposure, for many of these public school teens, this summer presents a chance to feel a part of the larger Jewish community, explains Rabbi Moshe Kotlarsky, Vice-Chairman of Merkos L’Inyonei Chinuch and Chairman of CTeen.

“This trip sends the strong message to these teens that they are not alone. For three full weeks, they are immersed in a warm Jewish environment, with tens of teens from similar backgrounds and similar challenges. These experiences and relationships will shape their connection to Yiddishkeit and their Jewish identity for the rest of their lives.”

For some of the teens, this was also the very first time they kept a full shabbos. Custom CTeen branded ‘Phone Sleeping Bags’ challenged them to disconnect from their phones for the full 24 hours of Shabbos

“What  an amazing and impactfull Shabbat experience, being at the kotel with so many other Jews,” described Michael Guige, a CTeener from Knoxville, Tennessee. “Our entire group put away their phones, allowing us to connect on a deeper level. I felt such a strong bond form over Shabbat. We all feel a real brotherhood now.”

While four of the groups are focused on Israel for their entire trip, three of the programs spent 5 days in Poland before continuing to Israel. Confronting our recent history, visiting the Nazi concentration camps and Jewish Ghettos provides for many powerful moments. The contrast to the extensive Jewish history and vibrant Jewish life in Israel has left a lasting impression on the teens.

The trips have been staggered throughout the summer, with multiple departure dates and locations to accommodate as many teens as possible.