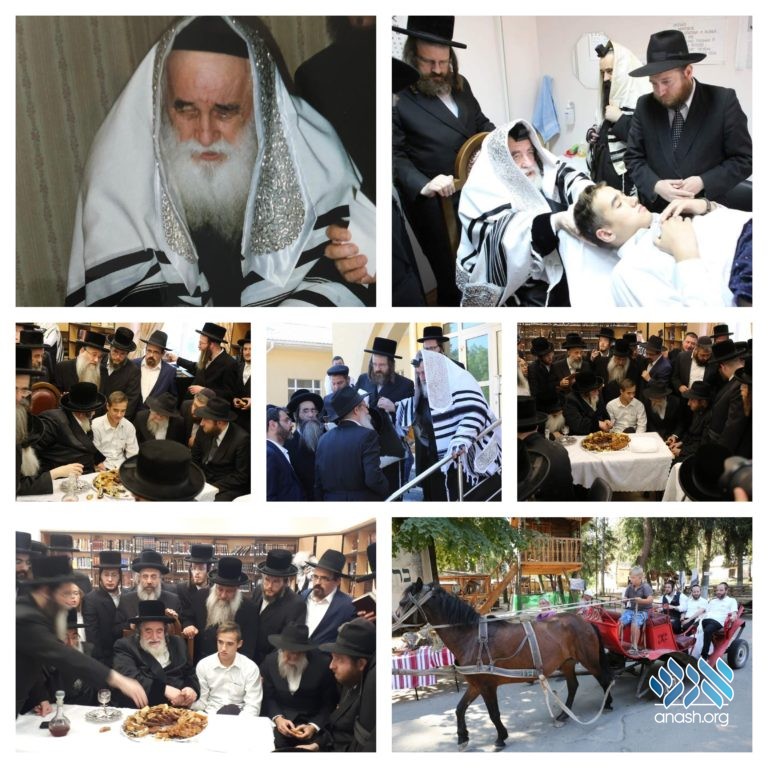 The Vizhnitzer Rebbe of Bnei Brak, Rav Yisroel Hager, returns to the place where his father was sandek 25 years ago.

In Zhitomir, Ukraine, today a very special bris took place. The young man having the bris was a teen from nearby Vinnitsa. A few months ago he started attending school at the Or Avner school in Vinnitsa, Ukraine.

The sandek was none other than the Vizhnitzer Rebbe of Bnei Brak, Rav Yisroel Hager, who is in Zhitomir for a fundraising function with his chassidim. Standing at his side were the shliach Rabbi Shlomo Wilhelm, the rov of Zhitomir and of Western Ukraine, as well as the shliach to Vinnitsa, Rabbi Shaul Hurvitz.

The bris took place at the new and beautiful shul in Zhitomir, which has just been dedicated and has heralded in a new period of hafotzas hama’ayonos in the city. It’s been 30 years since the shluchim arrived in Zhitomir.

Twenty-five years ago, the current Vizhnitzer Rebbe’s father, Rav Moshe Yehoshua Hager, zt”l, was also visiting Ukraine with a group of chassidim and was honored with being a sandek for a young man from the Zhitomir school. (See photo.)

Zhitomir hosts thousands of visitors annually in their guest houses. Guests are often astounded by the scope of activities carried on by Rabbi Wilhelm and his family and staff members. Institutions include a school, an orphanage and more; all within the framework of the “Or Avner” institutions in the Former Soviet Union.