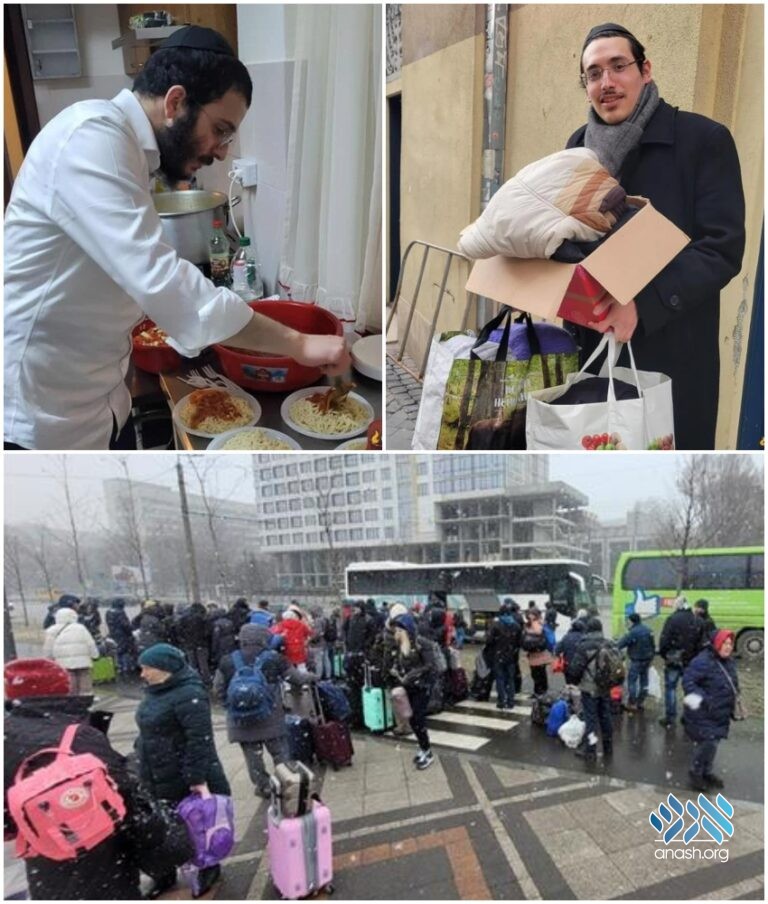 The Ukraine Jewish Relief Fund dispatched 25 young rabbis to Romania, Poland, Moldova, Bulgaria, Slovakia, Germany, and even into Ukraine proper, to assist with the influx of refugees funneling and lead religious services.

As soon as a river of Jewish refugees began streaming out of Ukraine, it became clear that Chabad-Lubavitch emissaries in Europe needed more manpower—and fast.

In response to the urgent pleas for help, the Ukraine Jewish Relief Fund opened a relief desk, which as part of a variety of services for refugees and those helping them, has sent 25 young rabbis to Romania, Poland, Moldova, Bulgaria, Slovakia, Germany and even into Ukraine proper, where they are assisting with the influx of refugees funneling through the western border town of Lviv.

They are working alongside the Chabad representatives in each country, as well as the Ukrainian emissaries who have accompanied their communities out of the war-torn nation and are now assisting them in acclimating to their new lives as refugees.

“Every refugee has his or her own heartbreak,” says Shneur Elberg of Brooklyn, who first assisted in the ad hoc refugee camp in Iasi, near the Ukraine-Romania border, before being called to Budapest. “Academics and professional musicians who have abandoned their careers, mothers of small children who left their husbands behind, and elderly people who never thought they would leave Ukraine. We listen, provide sympathy and supplies, and connect them to Chabad rabbis at their destination.”

According to Rabbi Mendel Banon of the Ukraine Desk, each group of rabbinical students—they typically travel in pairs—is tasked with a wide range of duties.

Some are supplying logistical support, visiting refugee camps and distributing food. In other areas, their assistance is more “rabbinic” in nature, such as on the Slovakian border, where they will be conducting Purim services for the members of the Israeli consulate who are stationed there to assist Jewish refugees with immigration to Israel.

Elberg explains that in Iasi, where people come directly from the border, he and his “partner” concentrated on providing hot meals and fresh beds to people who had just made it out of Ukraine. In the capital city of Bucharest, the work also includes providing them with new wardrobes, luggage, toys, and whatever else they may need as they figure out where to go next.

He says that their focus is on giving each individual what he or she needs.

Upon learning that it was the birthday of an autistic refugee child, they brought him a gift and sang and danced with the boy. “The mother did not know English or Hebrew,” says Elberg, “but she repeated spasiba (“thank you”) over and over again with tears in her eyes.”

And from there he went on to take an elderly couple shopping for slippers, phone chargers and other things they needed.

Chabad’s lifesaving work inside and outside of Ukraine has been critical in evacuating more than 35,000 civilians and feeding tens of thousands left inside the war-ravaged country.

The student visitation program has been a flagship program of Lubavitch World Headquarters since 1943. Known as “Merkos Shluchim,” or more informally as “Roving Rabbis, young rabbis and rabbinical students typically travel to far-flung locations to assist Jews in smaller communities, whether in the summer months or during the holiday season.

“In the current state of affairs, the rabbinic students are performing a dual role,” commented Rabbi Moshe Kotlarsky, vice chairman of Merkos L’Inyonei Chinuch, the educational arm of the Chabad-Lubavitch movement. “They are providing much-needed material assistance to the refugees while also seeing to their spiritual well-being.”

Banon reports that in addition to rabbis, his desk has sent chefs and doctors to Europe as well, ensuring that refugees be afforded the very best care, spiritual and physical.