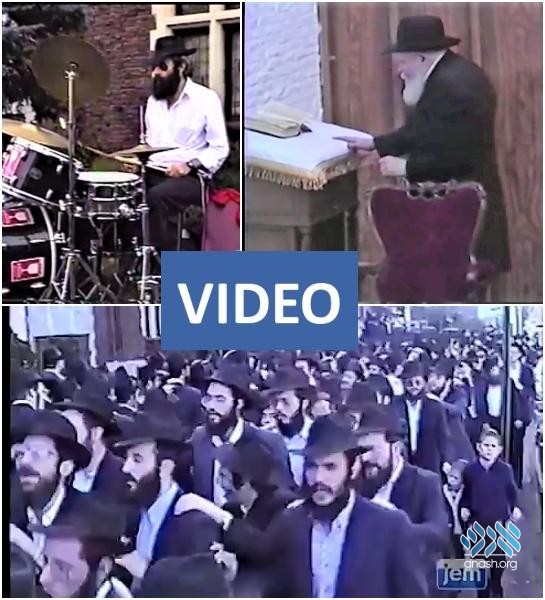 On 25 Cheshvan 5748, the US Court of Appeals ruled in favor of Agudas Chasidei Chabad as the sole owner of the Frierdiker Rebbe’s library.

Since the victory on Hei Teves, Chassidim have been cautiously optimistic about the results of the appeal which followed.

This afternoon, we were notified that Didan Notzach—the court case was won and the appeal had been dismissed. With lightning speed, the news spread throughout Crown Heights. From every side one could see men, women and children hurrying toward 770.

The simcha with which the news was received was immense and is difficult to describe with words. Although everyone was rooting for a victory and fully believed that it would come, nevertheless, the news came as a surprise.

Joy was bursting from our hearts and giant groups of people broke out dancing outside 770. The crowds grew from minute to minute as more people arrived.

The women and children also came to partake in the celebrations and stood across the street watching the lebedike dancing.

In the middle of all the tumult, it became known that all three judges had signed on this ruling. In fact, in their independently written verdicts, each of them made a point of recognizing the tremendous devotion and self-sacrifice that the Frierdiker Rebbe had for klal Yisroel.

The notion that three non-Jewish judges could all come to the same appreciation, lifted our spirits even more. It drove home and revealed to all, the knowledge that “Moshe emes v’Toraso emes.”

Rumor has it that from the moment the news arrived, the Rebbe showed tremendous Joy.

In the interim, we were notified that the Rebbe would be coming downstairs for mincha, and the bimah on which the Rebbe davens during Tishreiwas quickly erected.

A few minutes before mincha, the shul was already packed with people singing “Didan Notzach” eagerly anticipating the Rebbe’s arrival.

When the Rebbe entered, the singing intensified and everyone was trying to get a look at the Rebbe.

The Rebbe was very serious. On the way to his place, the Rebbe walked through the lines of children and spent considerable time giving each of them coins for tzedaka.

The Rebbe was very serious throughout mincha. This evening there was a Farbrengen to commemorate the shloshim of Rabbi Mentlik, rosh yeshivah of 770. It was also, above all, held to celebrate that shehecheyanu vekiyemanu vehigianu to this day of Didan Notzach!