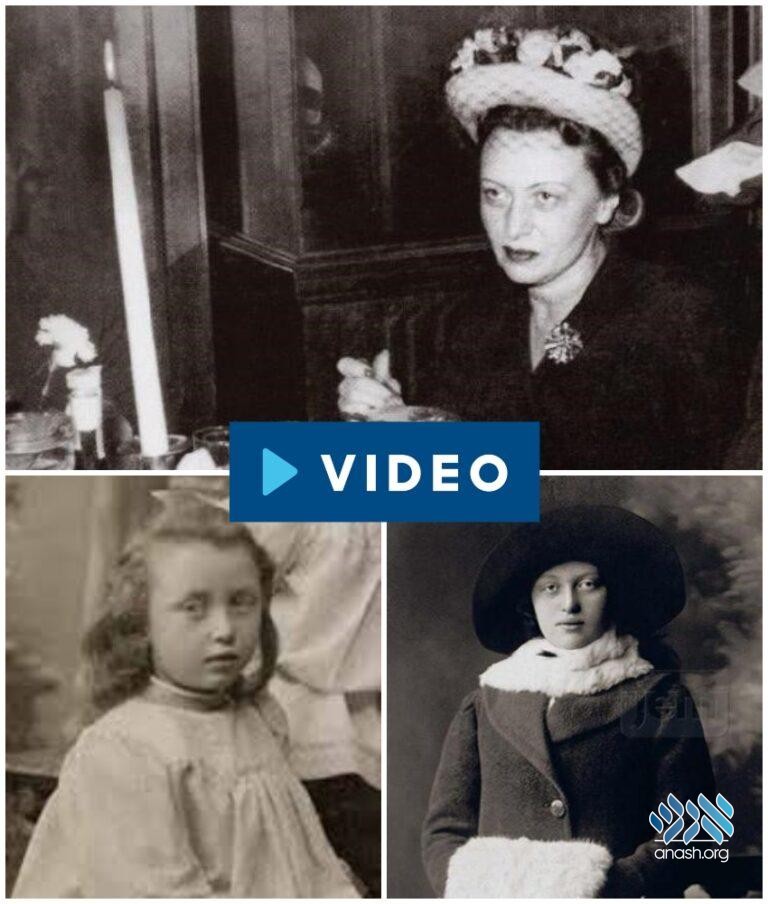 Today, 25 Adar, is the 120th birthday of Rebbetzin Chaya Mushka Schneerson. Read and watch a short biography of her life and times.

Rebbetzin Chaya Mushka Schneerson, of righteous memory, led an intensely private life. “Very few people knew about the relationship that I had with the Rebbetzin,” said Londoner Mrs. Louise Hager, who knew the Rebbetzin since the 1960s and spoke to her by phone at least once a week. “I think that was one of the strengths of the relationship. It was totally private.”

Although bits and pieces of details of the Rebbetzin’s personal friendships have leaked out through the years, the consensus is that it was her will to remain out of the limelight. For many, it was not until her funeral in 1988 that they realized the tremendous bond that she and her husband, the Lubavitcher Rebbe, Rabbi Menachem Mendel Schneerson, of righteous memory, shared, and the extraordinary sacrifices she willingly made to facilitate the Rebbe’s devotion to the Jewish people.

The Rebbe led the global Chabad-Lubavitch movement, which would become the largest Jewish organization in the world by the end of the 20th century, and inspired an immense infrastructure for Jewish activism in the United States and the world after the Holocaust.

Back then, thousands of people who came to escort her cortege down Eastern Parkway shed tears as they watched the Rebbe’s raw emotions in somberly escorting the body of his wife. In the days that followed, the Rebbe at times choked up in tears as he said the kaddish, the traditional mourner’s prayer, in her memory, and during a public talk he gave on her legacy.

The Rebbe urged that everyone take the Rebbetzin’s life and actions to heart.

The second of three daughters, Chaya Mushka (Moussia) Schneerson was born in Babinovitch, near the Russian city of Lubavitch, on Shabbat, the 25th of Adar, in 1901.

While a teenager, she risked discovery by the Russian authorities, and smuggled food and candles to the Novardok yeshivah. Throughout her life she repeatedly risked her life to help others, under both Soviet and Nazi rule, and experienced firsthand the sacrifices of global Jewish leadership. Yet when her husband refused the entreaties of chassidim, Chabad-Lubavitch followers, that he become rebbe, the Rebbetzin urged him to agree, knowing full well the toll it would take on her.

Her pivotal testimony in a mid-1980s federal case regarding the ownership of her father’s priceless library sheds some light on this sacrifice.

Summing up her life’s experience that a rebbe is completely devoted to the community at large and has no private life, she declared that the library, “belongs to the chassidim, because my father belonged to the chassidim.”

The Rebbetzin was a diligent student of chassidic thought, and accounts concur that she was one of the Rebbe’s only confidantes in the world.

Yet, despite her extraordinary role—as unknown as it was to the public—and her regal upbringing and bearing, it seems that she always found common ground with those who came to her, and helped each one feel comfortable and heard.

Mrs. Daniele Gorlin-Lassner, whose parents shared a close friendship with the Rebbe and Rebbetzin going all the way back to when they lived in Europe, said that the Rebbetzin consciously shunned attention.

“You know, as much as I would like to,” Mrs. Gorlin-Lassner quoted the Rebbetzin saying in the mid-1980s, “I don’t very often frequent the store or go shopping [in the neighborhood]. They all feel that they have to give me special kavod [honor], and that is really something that I don’t want.”

Just as she preferred to focus the spotlight away from herself, the Rebbetzin was ever sensitive to those around her, as evidenced by the recollection of Rabbi Shmuel Lew. Now the director of the Lubavitch House School in London, the flustered Rabbi Lew visited the Rebbetzin with his fiancé and family before he got married.

“There was a beautiful white tablecloth, and she served punch in long crystal glasses with glass straws,” he related. “At one point, when my hand was going over the glass, I didn’t notice the straw, and my hand pushed against the straw. The straw pushed against the glass, and the whole punch spilled on the table.”

Without missing a beat, “the Rebbetzin got all excited,” he continued, as if this was the best thing that could have happened in her home. “She said it’s a sign of blessing.”

Rabbi Lew’s father-in-law, Mr. Zalmon Jaffe, joked afterward that the Rebbetzin seemed “so delighted, that he was tempted to spill over another glass.”

Chicago cardiologist Dr. Ira Weiss, who cared closely for the Rebbe and the Rebbetzin following the Rebbe’s 1977 heart attack, spoke to the Rebbetzin daily.

“The Rebbetzin always worried about me, because I am a bicycle enthusiast,” revealed Dr. Weiss. Knowing how sleep-deprived he was, she would often inquire of him worriedly about his solitary rides home late at night.

In other exchanges, the Rebbetzin’s care for those she never met was evident. In one conversation with Mrs. Leah Kahan—a scholar who periodically visited the Rebbetzin and frequently spoke with her by phone—the Rebebtzin discussed the travails of a group of Satmar followers who had immersed themselves in Lubavitch chassidic teachings. Some of them faced the prospect of violence in their old community.

“It was a very difficult time, because Satmar was very much against [the students’ spiritual pursuits]. The Rebbetzin was very, very concerned,” said Mrs. Kahan.

According to Mrs. Kahan, the Rebbetzin was concerned for all involved, from their parents to their old schools. She worried about the marriage prospects of the newcomers, and was concerned that they should continue to respect their families and that the family unit remain complete.

When it came to the shluchim, the Chabad-Lubavitch emissaries, who serve farflung communities around the world to strengthen Judaism, the Rebbetzin was far more than a steadfast supporter. She admired the hardships they endured and the sacrifices they made to carry out their missions.

Mrs. Kahan remembered that one time when she came to see the Rebbetzin, there were a bunch of handmade items on the table. A group of shluchim had sent them to the Rebbetzin.

“They are so busy,” Mrs. Kahan said the Rebbetzin told her. “They have such heavy schedules, and they have nothing else to do than to think about me and send [these] to me? And who am I?”

When Mrs. Kahan tried responding about how much the Rebbetzin means to the shluchim, the Rebbetzin, in a rebuke of sorts, told her that she evidently does not appreciate enough the shluchim’s impossible schedules.

When traveling to the hospital on the very night of her passing, and in tremendous pain, the Rebbetzin’s sole concern appeared to be about the details of her doctor’s daughter’s engagement and her soon-to-be married life.

“It’s just amazing to me,” said Mrs. Sarah Shemtov, whose father tended at times to the medical needs of the Rebbe and Rebbetzin, “that the Rebbetzin was within an hour or hours before her [soul] left this world, and in the car, she didn’t ask [any] questions about herself.

“The Rebbetzin kept on turning to my father,” continued Mrs. Shemtov, “and asking, ‘So tell me, Doctor, how is the young couple? How are they doing? Are they happy? When is the wedding? Tell me about it.’”

“I think [that] she never thought about herself,” stated Mrs. Kahn. “It was always about somebody else.”

Years after visiting her, guests remembered that the Rebbetzin had a way of making the person she was speaking with feel as if he or she was the only one who mattered in the entire world, reminiscent of the way people describe the Rebbe’s undivided attention as he listened to people.

“The Rebbetzin was a person that you felt comfortable telling her everything,” said Mrs. Hadassah Carlebach. “She listened and showed concern, and asked me how things [were] going. [She] made me feel very good, and comforted me many times.”

Following her arrival to the United States after the Holocaust, Mrs. Carlebach went to the Rebbetzin for advice.

“I needed to help feed the family, so I started teaching,” said Mrs. Carlebach. “I told her how hard it was for me, and she encouraged me.

“When I mentioned, ‘I don’t think I’m cut out for it,’” the Rebbetzin expressed her understanding, but then added, ‘While you’re doing it, do [your] best,’” continued Mrs. Carlebach. “She said do the best you can. Whatever you are doing at that point, do the best that you can do.”

Indeed, Mrs. Carlebach persisted, and excelled at teaching for 20 years.

Mrs. Louise Hager, who is now a businesswoman living in London, related the first conversation she had with the Rebbetzin at age 14. The Rebbetzin wanted to know, “What did I enjoy? What were the subjects? Who were my friends? She showed great interest.

Doing so turned out to be a big incentive to do better: “I made an effort to try and do well in school.”

“The Rebbetzin would relate to anyone, even to the [little] children,” said Rabbi Lew. “She would say [to the little ones], ‘Come to Doda [Aunt].’”

“He sang a [slow introspective Chabad tune], and she had tears glistening in her eyes,” said Lew. “He said, ‘Do you know it?’

“You know, my husband comes home very late,” Mrs. Gorlin-Lassner said the Rebbetzin told her at the end of their meeting (in the mid-1980s). “He sometimes comes home [at] two, three in the morning. And when he comes home, I am going to have so much to say to him” about the meeting.

“They would have dinner together,” said Dr. Weiss, referring to that time as the Rebbe and the Rebbetzin’s “private tea party.”

Mrs. Carlebach was amazed that the Rebbetzin steadfastly waited up for the Rebbe.

“I don’t know how many wives would stay up [regularly] till 4:00 in the morning and wait for their husband to come home from [meetings] in order to ensure that he wouldn’t be eating by himself,” she said.

Those few involved in the Rebbe and the Rebbetzin’s medical care emphasized how each one tried to shield the other from painful news. They would also call doctors on each other’s behalf.

Hager said that she learned about the importance of human relationships from the Rebbetzin.

“Valuing people for what they are, not knocking them, building them up, trying to bring out the best in people, the positive thinking: those are all things that she lived by,” said Hager. “And that’s an example for us: looking at the glass being half-full, not half-empty.”

Click here for A Collection of Letters from the Frierdiker Rebbe to the Rebbetzin on Chof Hei Adar bit.ly/25acol

In a Sicha delivered on the 25th of Adar 5748 (1988), the Rebbetzin’s 87th birthday, and about a month after her passing, the Rebbe initiated the international birthday campaign in her memory, urging people to celebrate their birthdays and utilize the day as a time of introspection and making resolutions involving an increase in good deeds:

“A suggestion: It would be the greatest Zechus for the Neshama [of the Rebbetzin]; in connection with her Neshama and its elevation, we should institute that all Yidden begin celebrating their birthdays…” (25 Adar 5748).

Click here to learn all about the Jewish birthday. OrVechom.com/458473