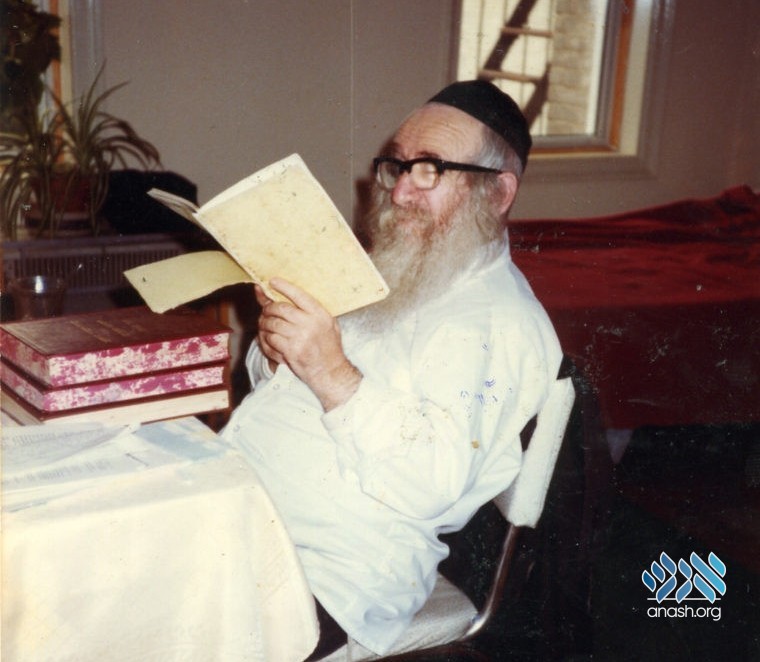 24 Av is the yahrzeit of the gaon and chassid Reb Avrum Hersh Cohen, who was known for his dedication to the study of Torah and his hiskashrus to the Rebbe.

The chossid Reb Avrum Hersh Cohen passed away on this day in 5755/1995. He left a large family of rabbonim and shluchim doing the Rebbe’s work all over the world.

Born in Lodz, Poland in 5676/1916, Reb Avrum Hersh came to Eretz Yisroel at the age of 20. Soon he became to niskarev to Chabad through the mashpia Reb Alter Simchovitch. For years he taught in the Mosdos of the Toldos Aron Chassidus, where he shared the light of Chassidus with many of his talmidim. He also was entrusted with learning Chassidus with many of the kanoyim of Yerushalayim.

In 5724/1964 he was hired to become the Rosh Kollel of the newly established Kollel in Kfar Chabad.

Reb Yosef Hartman remembered the first day that Reb Avrum Hersh joined the Kollel. The yungeleit soon learned that the “little” man in physical stature was a true Torah giant. Gemoroh, Rishonim, Achronim, Shulchan Aruch until the Achronim, there was no topic where he wasn’t “at home.”

The bochurim had gotten “used to” the mashpia Reb Shlomo Chaim as a “spiritual father” while in Yeshiva. Now in Kollel, Reb Avrum Hersh served in that capacity, with every yungerman knowing that he could discuss any issue that may have arisen with his Rosh Kollel. He took great interest in the doings of every yungerman, encouraging them to fulfill their potentials and utilize their limited time in Kollel for learning and mivtzoyim.

It wasn’t easy getting to Nachla from the Kfar. Transporation was sporadic and it could be a long time waiting until the bus or taxi would arrive. But neither heat nor cold nor rain would keep him from doing his work. Once a week he’d travel from Kfar to Nachla and deliver a shiur and speak to the yungeleit and answer any questions that may have come up.

Then there’s the hiskashrus: When the Rebbe called for Mivtza Tefillin to be started, Reb Avrum Hersh was among the first to jump into action. If you visited the Kosel on a Friday afternoon you couldn’t miss him in his distinct Yerushalmi levush – already dressed for Shabbos – “chasing” soldiers and other visitors to put on Tefillin. It wasn’t easy to turn down a smiling man who you could tell had only your best interests in mind.

Despite having, Boruch Hashem, a large family and earning a small salary as Rosh Kollel, he would save up all year so that he could spend Tishrei with the Rebbe. The “tziyur” of Reb Avrum Hersh is one that anybody who spent Tishrei in 770 will never forget.

Rabbi Hartman remembered several of Reb Avrum Hersh’s stringencies that he had in his daily life:

“Fifty years have passed,” Rabbi Hartman wrote, “but his smiling and pleasant demeanor is still present in my mind, and I still practice many of the minhogim and stringencies that I learned from.”