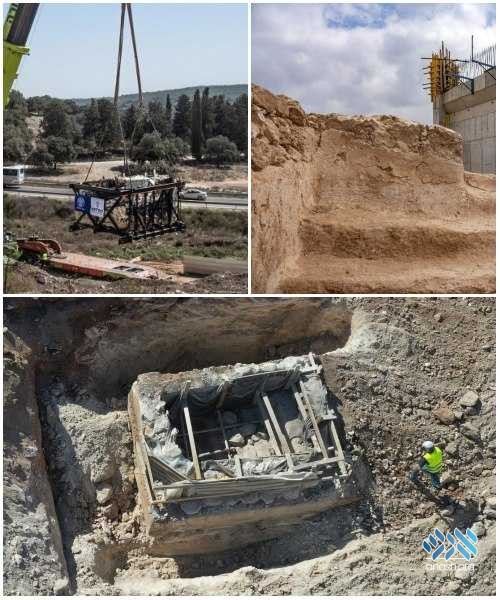 A 2,000-year-old mikva in Israel’s Galilee region that provides the first-ever proof of Jewish religious life at that time, was airlifted to safety from a Galilee highway to a nearby Kibbutz.

Archeologists from the Israel Antiquities Authority uncovered a 2,000-year-old mikvah among the remains of an ancient Jewish farmstead in the Galilee region in northern Israel.

The chance discovery happened as workers were set to begin construction on a major highway interchange at the Hamovil junction in Lower Galilee. Archaeologists carried out an excavation project around the construction area and came across the mikvah.

The findings dating back to the time of the second Beis Hamikdash, mark the first time archaeologists have ever discovered the remains of ancient Jewish farms in the Galilee region.

“The existence of a mikvah, a purification facility, unequivocally indicates that the residents of the ancient farm were Jewish, who led a religious and traditional way of life, and maintained purity as a Torah commandment,” excavation directors Abd Elghani Ibrahim and Dr. Walid said.

“Until now we hadn’t discovered Jewish farms in the Galil. It was considered that the Jews in the Roman period didn’t live on farms outside the villages or towns. The discovery of the farmstead at some distance from the village of the Shikhin and the large Jewish town of Sepphoris, shows that Jews also settled in farmsteads, that perhaps functioned as the rural hinterland of Sepphoris,” they said.

Since preserving the mikveh on site seemed implausible, the alternative solution was to detach the 2,000-year-old installation from the rock and to transplant it at a nearby kibbutz where it will be properly preserved for the public benefit.