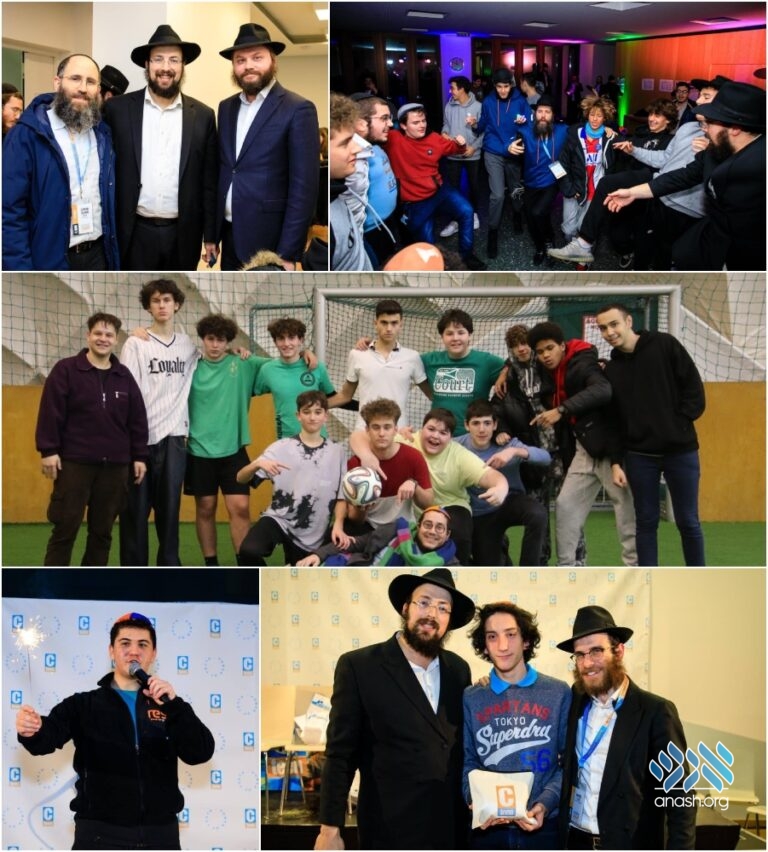 Tucked away down a narrow cobblestone street in Vienna’s old city, the facade of a nondescript apartment building hides the Seitenstettengasse Synagogue. Out of sight inside an apartment block, it was the only Austrian synagogue to escape the Nazi fires of Kristallnacht in 1938. When the Nazi regime died, it was the only Austrian synagogue left standing.

On Friday, December 2, 2022, two hundred Jewish teenagers from nineteen European countries filed into the synagogue’s plush wooden pews. The youngsters were along for CTeen’s Shabbat Across Europe, a spirited Shabbat retreat that unites Chabad’s youth chapters from European cities from Malta, and Norway, to Croatia. Seated among the majestic synagogue’s ionic columns, the youngsters listened intently to Vienna Chief Rabbi Yaron Engelmayer speak about the Jewish people’s persistence in the face of hatred before lighting memorial candles outside at the somber stone monument of the Judenplatz Holocaust Memorial.

With its deep history, the Seitenstettengasse Synagogue opened the teens’ eyes to the depth of their European Jewish identity. But if the history here seemed to tell them to hide, these Jewish boys and girls chose a bolder path. These teens openly celebrated their Jewish identity and future in the streets near Vienna’s old Jewish section. In two circles, these Jewish boys and girls danced in the streets of Vienna, the boys sporting flashy orange and blue kippahs.

Throughout the four-day Shabbaton program, the two hundred participants did more than explore Vienna’s Jewish history. In dozens of workshops, trips, and social games, they made new friends from as far as Ukraine, Germany, and Spain, flew into the air at an indoor bounce house, and experienced a relaxed and spirited Shabbat.

Late Shabbat afternoon on December 3, several teens spoke at Chabad of Vienna’s sprawling Beit Halevi Center, where the Shabbaton centered its programming. 14-year-old Jonathan Ben-Gad from Rotterdam, the Netherlands, talked about the antisemitism his community faces. “It’s dangerous to wear a kippah in the streets,” he said, “you could be targeted for violence.” Jonathan urged his new friends to build a strong, positive Jewish identity. “We can’t define our Jewish identity in response to antisemitism,” he said, “we need to be proactive and strengthen our Jewish knowledge and pride.”

Throughout the Shabbaton’s four-day program, building a stronger sense of Jewish identity was front and center. According to Rabbi Moshe Kotlarsky, Chairman of CTeen International, Shabbat Across Europe’s program was designed to help teens feel more comfortable being open about their Jewish identity. “Many participating teens come from cities where it’s uncomfortable to be visibly Jewish,” Rabbi Kotlarsky said, “Over Shabbat, they met Jewish peers, experienced Jewish heritage sites, and got a taste of what Jewish life can be.”

Over a Shabbat of shared meals and inspiration, the teens enjoyed workshops like “What’s My Purpose” with Rebbetzin Chaya Chitrik of Istanbul and “Does G-d Care What I Do” with Rebbetzin Raizel Zaklos of Croatia. Following Shabbat, CTeen treated the teens to a football tournament, a disco party, and on Sunday, a trip to the historic Prater amusement park, including a ride on Vienna’s famous giant Ferris wheel, which dates from 1897.

Hosted in Chabad of Vienna’s prominent center near the Danube, the Shabbaton’s closing ceremony was held in Chabad’s Lauder Business School. Behind the scenes, Rabbi Zalman Raskin of Vienna’s Community Center Beit Halevi worked sixteen-hour days, with the assistance of Rabbi Tzemmy and Sophie Bassman from CTeen Budapest, to organize the Shabbaton programming.

When it was all over, and the teens were heading home with their respective CTeen Rabbis and Rebbetzins, their impressions of the Shabbaton came to the fore. The Shabbaton was particularly poignant for 15-year-old Levi Susorov, who is returning to his native Dniper, Ukraine, after months of taking refuge in Berlin, Germany. “The Shabbaton was my last stop before returning home,” he said, “I feel much stronger for having been here with everyone.”

Seeing Levi bravely return to his war-torn home was an emotional moment for Rabbi Zalman Raskin, who has seen thousands of Ukrainian Jews find refuge in Vienna. “He came to the Shabbaton to recharge ahead of his trip home,” he said. “We’re all praying for his safety.”

One teen, 17-year-old Berti Kohen from Istanbul, said the weekend empowered him to express his Jewish identity more openly. “It was beautiful to share an experience with so many other Jewish teens,” he said. “We came from many countries, but we share the same Jewish identity.” Reflecting on a recent trip to Auschwitz, he was moved to see the Shabbaton’s open display of Jewish pride.

“Who could have imagined eighty years ago that Jewish teens would gather so proudly here in Vienna,” Berti said. “Our grandparents’ lives were stolen for being Jewish. We must honor them, not by hiding our Judaism, but by standing out with pride.”

The Shabbaton was made possible by a generous grant facilitated by Rabbi Bentzi Lipskier of the Meromim Foundation.