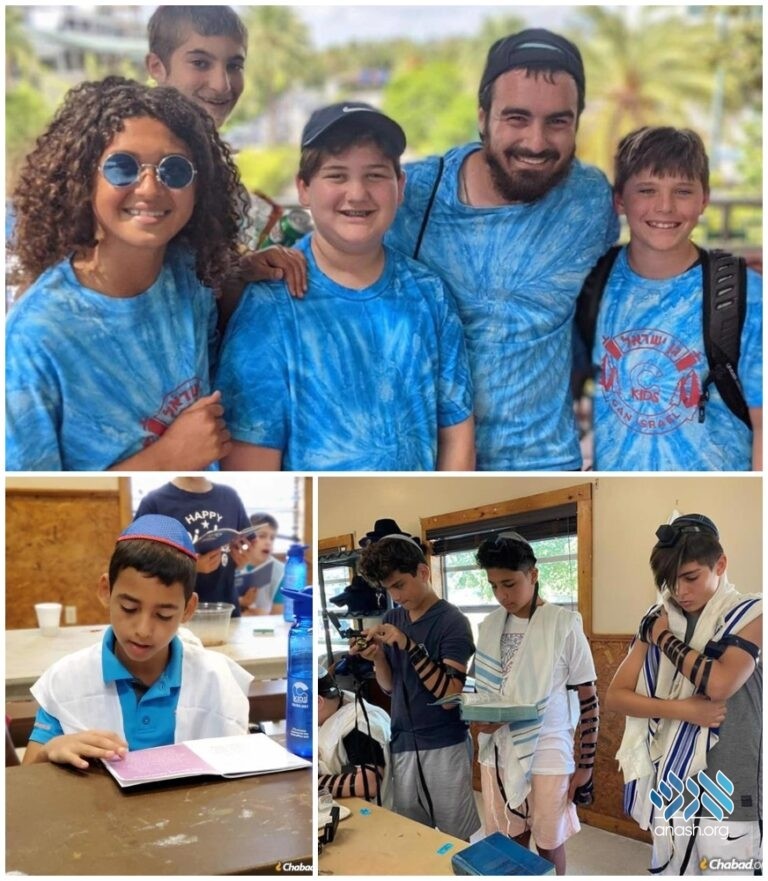 Thousands more Jewish children in the United States and Europe will experience Chabad overnight camping beginning next summer thanks to a $2.5 million grant announced at the Kinus Hashluchim.

Thousands more Jewish children in the United States and Europe will experience Chabad overnight camping beginning next summer thanks to a $2.5 million grant announced at the Kinus Hashluchim.

The grant, which comes from the Rohr Family Foundation, which is a longtime Chabad supporter, as well as Project Rina, a philanthropic fund, expands the activities of CKids (The Chabad Children’s Network), which offers a cohesive array of programs for Jewish children—including Hebrew schools, day camps, and after-school enrichment programs. In recent years, CKids began opening overnight camps for Jewish kids of all backgrounds.

“We sense a great opportunity,” CKids director Rabbi Zalman Loewenthal tells Chabad.org. “About 25,000 Jewish children attend Chabad Hebrew schools in North America weekly. There are about 60,000 to 70,000 children currently going to Chabad day camps every summer. A significant number of those children can be going to overnight camp.” The program also hopes to attract many children who have not yet had any Jewish camping experience at all.

As part of the CKids camp network, local Chabad emissaries will be responsible for the ongoing funding and programming of their camps, working in close collaboration with CKids. The Foundation for Jewish Camp will provide training for the professional development of camp management, staff management, staff training, recruitment, facility use and general best practices.

“The new overnight camps are sure to have a strong effect on the Jewish future of children who attend,” says Rabbi Mendy Kotlarsky, director of Chabad’s Suite 302, which develops and provides centralized programs and services for Chabad centers worldwide, including CKids. “After living in a Jewish environment for a few weeks in the summer, they come home more engaged and involved in Judaism. We know that will have a tremendous impact on them for the rest of their lives.”

Summer camps have long been an important part of Chabad education. The Rebbe frequently noted that “in a certain sense, it can be a better educational experience than the rest of the year.”

The first Chabad-affiliated summer camp was a girls’ overnight camp, Camp Emunah in Greenfield Park, N.Y. (where it is still located), founded in 1953 by Rabbi Jacob J. Hecht. In 1956, the Rebbe directed some young men to open a parallel boys’ overnight camp under the auspices of the Merkos L’Inyonei Chinuch, the educational arm of the Chabad-Lubavitch movement. The Rebbe chose the name Gan Israel (“Garden of Israel”) for this camp, after the founder of Chassidism, Rabbi Israel Baal Shem Tov. The young men were called to speak with the Rebbe many times, and received detailed guidance and many blessings along the way.

The value the Rebbe placed on these camps wasn’t seen with anything else. Since ascending leadership of Chabad-Lubavitch, the Rebbe never traveled outside of New York City—except for three times, all of which were visits to Camp Emunah and Camp Gan Israel, where the Rebbe held a special farbengen for the campers and staff.

In a talk addressing Chabad Chassidim in 1981, the Rebbe said, “The influence and education of a proper summer camp can be much greater even than a good school; in camp, the children spend the entire 24 hours of the day under the influence of the education. At school, the child returns home after classes and therefore it only has a partial effect on the child. A camp where the spirit of holiness and Judaism envelops the child all the time, without interruption, can make an enormously good impression on the mind and soul of the child.”

After the establishment of the first Camp Gan Israel in 1956, the network of Chabad camps began to spread. In 1958, an overnight camp was opened in Canada with detailed guidance and blessings from the Rebbe. That same year, Chabad in Israel began opening a chain of day camps, which the Rebbe sent instructions to also call it “Camp Gan Israel.”

In the summer of 1959, Camp Gan Israel Italy, was opened by Rabbi Gershon Mendel and Bassie Garelik the first of its kind in Europe. The Gareliks had arrived in Milan just six months earlier, sent by the Rebbe as his emissaries to Italy.

Growth of Gan Israel Over the Decades

Over the years, Gan Israel has grown tremendously, and many Chabad emissaries around the world have opened their own branches. In 2018, a tally found that there were 524 Gan Israel camps in 40 countries worldwide, with a total attendance of 150,000 Jewish children. The network has since grown beyond count and continues to expand as the largest network of Jewish camps in the world.

In recent decades, most Chabad overnight camps in North America attracted children from homes that are already religious, making it difficult for children with less Jewish education to fit in.

To fill that void, there are already three established CKids overnight camps: a boy’s camp in Florida;, both a girl’s and boy’s camp in Wisconsin; and a girl’s camp in Denmark. Each camp is run independently with grants and various forms of help provided by CKids. The new $2.5 million grant will bring the total of CKids-affiliated overnight camps to seven: Six in North America and one in Europe.

“It’s living 24/7 in the environment of Judaism,” says Loewenthal. “Not in a classroom setting where you’re trying to give over information in a top-down setting, but in a day of fun and excitement. It’s really living Judaism, playing sports with a yarmulke on, saying a blessing before eating—every part of Jewish life and with counselors as role models. It’s sure to change these young Jewish lives.”