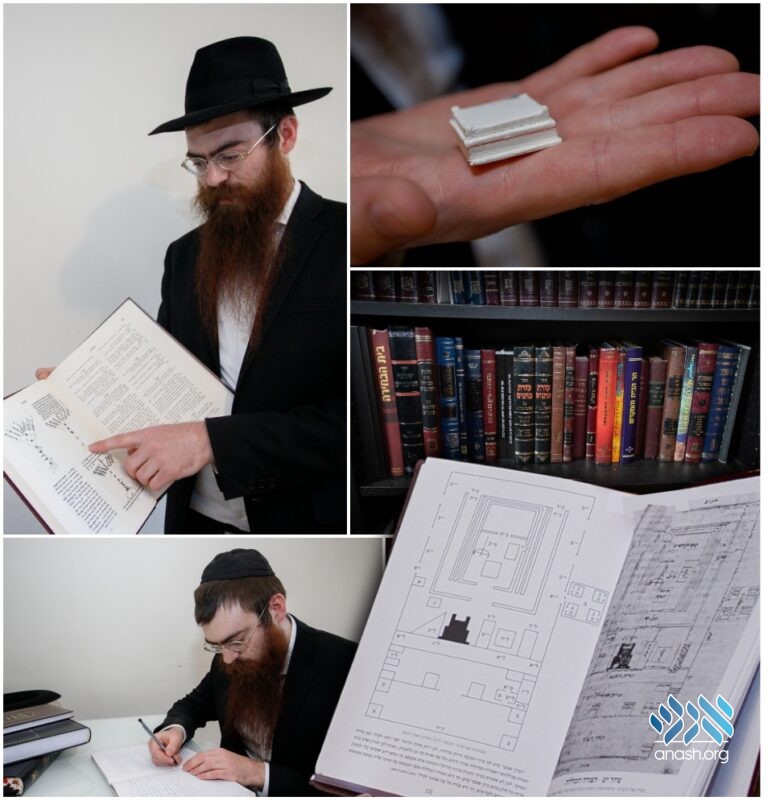 What began as a project to research the Rambam’s drawings on the Beis Hamikdash, and continued as a corona lockdown project, resulted in a hardcover sefer, the handiwork of a young Lubavitcher talmid chochom.

Just a short while before tens of thousands of Yidden celebrated the Siyum Harambam, a Crown Heights yungeman marked another Rambam related celebration: The publication of a sefer examining the Rambam’s drawings of the Beis Hamikdash.

Over the decades, hundreds of works have been authored on the Rambam’s seforim, closely examining his every word. But the new sefer, authored by Rabbi Yossel Meyers, goes a step further. It delves into the details and precision of the Rambam’s illustrations, showing how even a picture drawn by the Rambam can be studied in depth.

Meyers says the idea for the sefer took root when he began studying Maseches Midos, the tractate in Mishnayos that describes the layout and functions of the Beis Hamikdash. To better understand the masechta, he was learning it with the Rambam’s Pirush Hamishnayos commentary. Originally written in Arabic, Meyers was using the Kapach edition, translated into Hebrew.

“In the standard prints of Mishnayos, these pictures are very difficult to understand, but when using the Kapach translation, I noticed that he drew very different pictures which were much easier to understand and fit with the Rambam’s opinion on how the Beis Hamikdosh looked,” Meyers said.

After doing a bit more research, Meyers understood that the pictures in the Kapach translation were based on old handwritten editions of the Rambam, but wasn’t yet sure just how accurate they actually were. So he decided to try the Central Chabad Library and see if they had any material that would be helpful.

“That is when I made an amazing discovery: The librarian brought out a 3-volume set of big books consisting of copies of 5 out of 6 Sedarim of Pirush Hamishnayos in the holy handwriting of the Rambam himself! What I learned is that most of the Rambam’s original manuscript of Pirush Hamishnayos still exists today; Three Sedarim are in the Bodlian Library in Oxford, and two Sedarim are in the National library of Israel. The pictures in the Kapach translation were a copy of the original manuscript,” Meyers said.

After comparing the original pictures to the drawings in various prints of Pirush Hamishnayos, he realized that the pictures in the old prints of Mishnayos had many mistakes.

Now, Meyers began his research in earnest to see if there were any seforim that discussed the Rambam’s pictures. He found that the Rambam’s drawing of the Menorah, reproduced in the Rebbe’s famous sicha about the Menorah’s shape, is discussed in many places, largely thanks to the above sicha. The sefer Minchas Yehuda V’Yerushalayim from Rabbi Yehuda Keller a”h also discusses some of the pictures. Otherwise, the majority of the details of the pictures were left untouched, he says.

“After not finding enough Meforshim which discuss the topic, I decided to write some of my thoughts and publish them in Haoros Ubiurim, hoping that this would open a discussion on the topic. I began typing, and had filled a few pages when covid hit New York. Now I was stuck at home with nothing more to do but to continue typing. Before I knew it, I had a decent amount of content which was enough to be published independently.”

But Meyers wasn’t sure if the content was up to par for printing. So he reached out to a number of individuals who are experts on the topic of the Bais Hamikdosh, and they unanimously encouraged him to publish. When he reached out to Rabbi Heschel Greenberg, who had published a number of books on Moshiach and Geulah, Rabbi Greenberg told him to publish the sefer with a hard cover.

“To publish with a hard cover was an idea that hadn’t even entered my mind,” Meyers says. “Even after he encouraged me to, I still wasn’t 100 percent convinced.”

A few months later, with Kollel back in session, Meyers began bringing his laptop to Kollel and continued working on his sefer. One day, as he was learning, he was approached by Yechiel Taubenblat, who designs seforim and had already helped numerous authors publish their works. Taubenblat told him that he hear he was working on a sefer, and would like to help him get it off the fround.

“I gave him the content and before I knew it there was a beautiful Sefer in the making. I must say that he really devoted himself to this project. Without his help, chances are it would have never happened,” Meyers says.

With the sefer almost ready to print, he now needed to come up with a name for the work.

“I asked my uncle, Rabbi Yosef Barber, if he had any ideas,” Meyers recalls. “He responded that the name I gave it was good. I didn’t know what he was talking about, I hadn’t given it a name yet.”

He then realized that when he had sent his uncle the word document, he had titled it ‘Biurim Al Tziyurei HaRambam’ without putting much thought into it. So, he decided to accept his uncles suggestion and name the work “Tziyurei HaRambam”.

“It was then that I made an amazing discovery: The name I had given the sefer – Tziyurei [Ha]Rambam – had the exact same gematria as my name – Yosef Eliyahu Meyers! I felt like this was a clear sign from Hashem that He was helping me out,” he says.

“In general, I felt tremendous siyata dishmaya throughout my work. I feel like the work is better than what I could have naturally done,” Meyers humbly concludes.

Coming from the Siyum Harambam, and approaching the time of the year when the Rebbe encouraged all to learn Maseches Midos and Hilchos Beis Habechira, the sefer is the perfect purchase for yourself, your shul or as a gift.