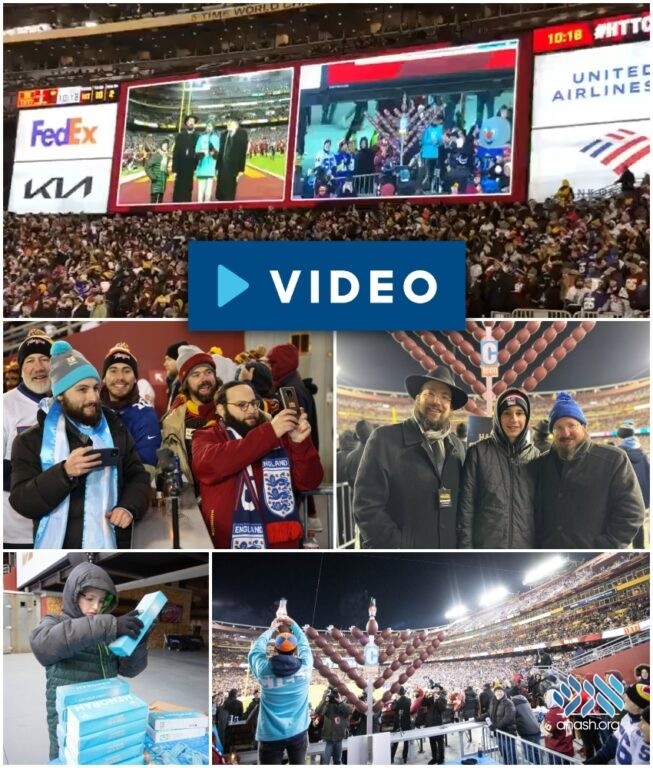 Sixty-two thousand fans watched from the stands at FedEx Field and upwards of eighteen million tuned in from home, for the prime-time game’s first public menorah lighting.

On Sunday Night, when the Washington Commanders faced the New York Giants on the first night of Chanukah, CTeen International and Chabad of Maryland were there to kindle Sunday Night Football’s first-ever menorah lighting. With sixty-two thousand fans watching from the stands at FedEx Field and upwards of eighteen million tuning in from home, the prime-time game public menorah lighting spread Chanukah’s light and message to the masses.

In the game’s second quarter, the announcer invited the crowd to turn their attention to the screens as a Jewish teen recited the blessings and lit a specially designed Football menorah on the concourse overlooking the football field. The crowd erupted in cheers and fireworks filled the sky as the first candle was lit. Rabbi Shimon Rivkin of CTeen International, Rabbi Shmuel Kaplan, and Rabbi Sholom Raichik of Chabad, Maryland, were present and wished the fans a happy Chanukah.

Before the game, Chabad of Maryland organized a menorah car parade to FedEx Field, followed by a tailgate party outside the game, and pre-game distributions of Chanukah menorahs, kosher latkes, and fresh jelly-laden doughnuts for Jewish fans.

In addition to the sixty-two thousand spectators watching from the stands, an estimated 18 Million plus viewers participated from home as the Menorah lighting was featured on NBC’s Sunday Night Football program. “Chanukah is about our collective responsibility to bring light and positivity to the world,” said Rabbi Mendy Kotlarsky of CTeen International. “Partnering with the NFL and NBC to kindle the Menorah in such a public fashion is the ultimate expression of that collective duty.”

The menorah lighting carries on a tradition initiated by the Rebbe in the 1970s to celebrate Chanukah through public menorah lightings. By publicizing the Chanukah miracle, these public celebrations aim to encourage Jews to take pride in their Judaism, and share Chanukah’s message of the power of light over darkness with a broad audience.