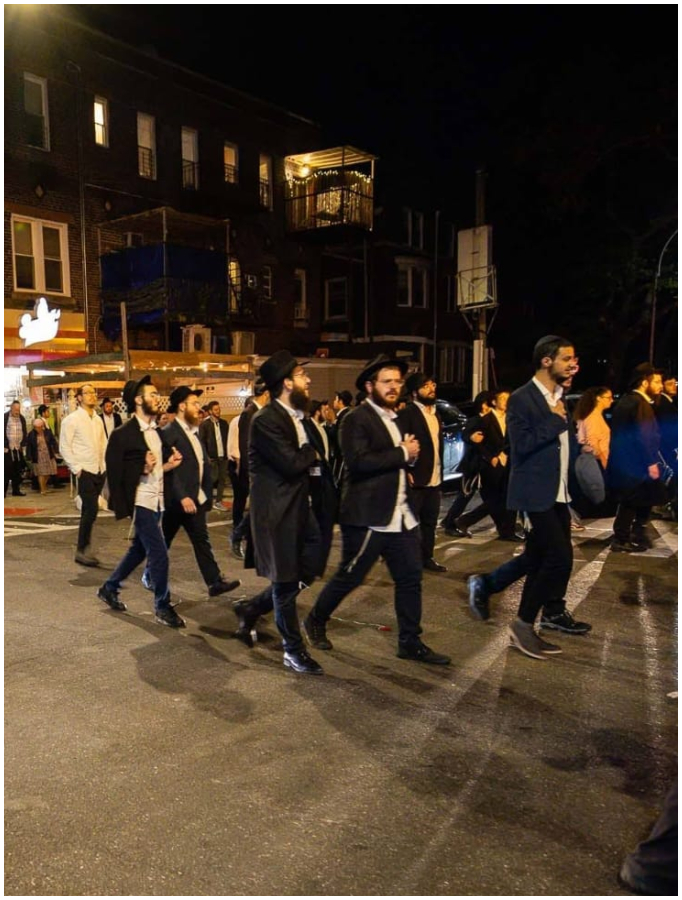 On Simchat Torah, a total of 270 shuls were visited by over 1500 Chabad Chasidim, who marched from 770 to bring the Rebbe’s message and the Joy of Yom Tov to thousands of Jews around New York.

From The early years of the Rebbe’s leadership, the Rebbe spoke about the importance of the Tahalucha, and over the years the Rebbe continued to express his pleasure from the Tahaluchos. Each Tahalucha has its own unique mission. Concerning the Tahalucha of Simchat Torah, the Rebbe spoke about the importance of bringing the special joy of Simchat Torah to Jews all over by visiting communities and shuls around New York. The Rebbe would often devote a Sicha to those who went on the Simchas Torah Tahalucha, by the Farbrengen the next day.

Over the years The Rebbe would stand by the front door of 770 watching and encouraging all the Chassidim as they would march by signing on the way to Tahalucha. Occasionally the Rebbe would be outside to greet the Tahalucha as it returned.

The first time that Tahalucha was mentioned by the Rebbe, was on Shavuos 5715 during the Farbrengen, the Rebbe thanked the new Moisad named, “Tzach” for organizing the Tahalucha and said that anyone who participated should say L’chaim.

This year before Yomtov, many Rabbis were calling the offices of the Lubavitch Youth Organization, to make sure that the Tahalucha would come to their Shul. Many of the Rabbis who called told LYO, “You bring a special life and joy that our Shul waits for and appreciates!”

On Simchat Torah, a total of 270 shuls were visited by over 1500 Chabad Chasidim, who marched from 770 Eastern Parkway and brought the Rebbe’s message and the Joy of Yom Tov to thousands of Jews around New York.

The Tahalucha spread out to many neighborhoods across NY, with some walking as far as four hours. The Tahalucha visited Shuls in Manhattan’s East side, Boro Park, Brownsville, The Bronx, Brighton Beach, Howard Beach, Manhattan Beach, Roosevelt Island, Starrett City, Flatbush, Canarsie, Queens, Park Slope, Prospect Heights, Ridgewood, and Sheepshead Bay. All along the way the chassidim were singing and sharing the joy of Yom Tov with countless people who appreciated the joy they were bringing to the community.

It is clear that The desire to fulfill the wish of the Rebbe only strengthens from day to day. After Yomtov The positive response from the people and Shuls that were visited across NY was tremendous.

One Rabbi called to say that a person in his Shul was so inspired by the Bachurim and the joy of the Hakafos that he started to put on Tefillin every day. Other shuls called to say how touched they were by the special joy of those who came on Tahlchua which uplifted the entire Shul and that they stayed until the end of Hakafos.

In some shuls which are struggling with a Minyan and often find themself in an area where there is a much smaller Jewish community, the Bachurim and yungerleit actually helped make the Minyan, and brought the Simcha of Yomtov giving the people and the shuls a much-needed boost. One Rav called to say, It’s simply amazing to see how the light and leadership of the Rebbe continue to illuminate Klal Yisroel.

For those walking to Manhattan, a special Kiddush was organized at the shul at the foot of the Williamsburg bridge. The Kiddush was sponsored in memory of the Chasid Reb Michael Raskin A”H and was accommodated by Beis Shlome Zalman – Litowicker Shul on Delancey Street.

“It is clear to see that The Rebbe’s work is reaching further with every passing day and the world is deeply appreciating it,” said Rabbi Shmuel M Butman, director of the Lubavitch Youth Organization which organizes the Tahalucha.

The Tahalucha was coordinated by Rabbi Yossi Butman, Project director of the Lubavitch Youth Organization, who thanked the NYPD and Sergeant Mike Baratta of  the 71 Precinct for their tremendous cooperation and the security they continue to provide the Tahalucha.

The Tahalucha was coordinated together with Rabbi Yosef Goldwasser and Hatamin Shmuel Butler who worked tirelessly with all the Rabanim, Shuls, speakers, and groups to ensure that the Tahalucha was a tremendous success,