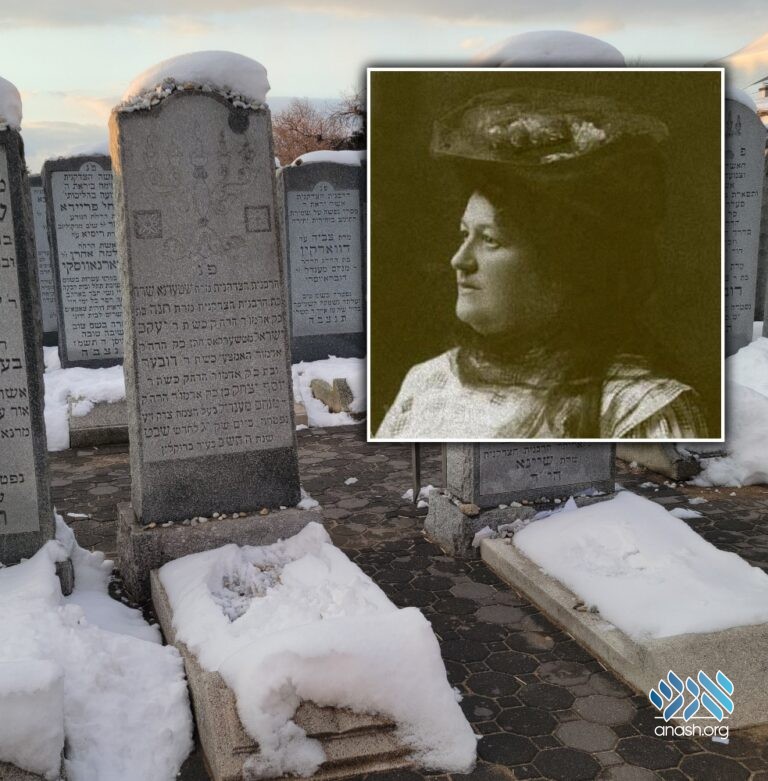 This Shabbos, the 13th of Shevat, marked the 80th yahrzeit of Rebbetzin Shterna Sara, wife of the Rebbe Rashab and mother of the Frierdiker Rebbe. Read a short history of her life and times.

Rebbetzin Shterna Sara’s parents were HaRav Yosef Yitzchok, the Rebbe the Tzemach Tzedek’s sixth son, and Rebbetzin Chana, a daughter of HaRav Yaakov Yisroel of Chickas and HaRabbonis Devorah Leah, a daughter of the Mitteler Rebbe.

While her parents lived in Cherkas, Ukraine, they would visit the Tzemach Tzedek from time to time, and in 5620 (1760) during one of their visits to Lubavitch she was born.

When she was five years old and her family came for another visit, the Rebbe the Tzemach Tzedek noticed her standing next to her cousin, Sholom DovBer, and remarked Chosson and Kallah.

Their father’s, the Rebbe’s sons, knowing that their father would never say something just in jest, acted on his advice, and in his presence the engagement agreement was written. The understanding was that the wedding would take place in ten years in Yerushalayim.

When the time of their wedding neared, there was a question of where the wedding should take place as Moshiach had not arrived. HaRav Yosef Yitzchok said it should be in the city of the kallah, as is customary, while the Rebbe Rashab said it should be in Lubavitch, the city of the Rebbeim. Furthermore, he explained that due to his frail health he would not be able to travel to his brother’s city.

However, HaRav Yosef Yitzchok was firm in his opinion and the wedding took place in his city, which was then Avrutch. The Rebbe Maharash escorted his son the chosson on the first day of his travel to Avrutch and before parting ways he instructed him not to wear a shtreimel out of Lubavitch.

The chassunah was to be on erev Shabbos but at the kabbalas ponim, when the Rebbe Maharash’s gabbai removed the shtreimel the wedding was postponed until motzei Shabbos. HaRav Yosef Yitzchok was hoping that he would be able to convince them to allow the chosson to wear the shtreimel.

When he realized that he won’t, he was distraught and mentioned that perhaps the wedding should be called off. However, the kallah, Rebbetzin Shterna Sara replied, being that  the shidduch was arranged by our grandfather, we have to listen to him.

Right after the wedding, they returned to Lubavitch, and she assisted her husband. Being that she had a clear handwriting she began transcribing for him, her father-in-law’s manuscripts of his maamorim. Her transcripts were so accurate that her son the Frierdiker Rebbe, kept them with the original ones.

However, the Rebbetzin had some difficulty in acclimating to Lubavitch, especially after suffering a miscarriage. Her sorrow was strengthened as the months turned into years and she had not been blessed with a child. The Rebbe the Tzemach Tzedek told her, “Short trees give off good fruit.”

Then on a Simchas Torah she had a dream that the Rebbe the Tzemach Tzedek, the Mitteler Rebbe and the Alter Rebbe appeared to her and blessed her that she will be blessed with a child. They instructed her to give eighteen rubles to tzedoka without letting people know that it was her who had given it.

She was not only generous when there was plenty of money, but even in the years after the Rebbe Maharash’s histalkus and there was no money, and she didn’t have any coin to give to the poor person that knocked on the door, she would give him from the little food that was in the house.

As the years passed and the yeshiva developed and there were close to two hundred younger boys learning but not officially part of the yeshiva she established a special kitchen for them and it was called the Rebbetzin’s soup. In order to be allowed to partake in it, one needed a note from the Rebbetzin

Whoever ate in her kitchen, felt as if she was their mother figure, as from time to time she would ask them about their well-being and if she noticed something amiss she would take care of it.

In fact, some of these students were originally not accepted, but the Rebbetzin intervened on their behalf, and only then were they accepted. One such student was Shlomo Aharon Kazarnovsky.

In 5657 (1897) her husband the Rebbe Rashab came from the specialist and informed her that since the doctors had just informed her that he has only a few more months to live, he has decided to move to Eretz Yisroel and leave their sixteen-year-old son to take care of the chassidim in Russia. However, she convinced him to remain and Boruch Hashem the Rebbe lived another twenty-three years.

In addition to being very kind-hearted, the chassidim would say that she is an extremely intelligent person. Perhaps we can see this when the family was discussing if the Rebbe Rashab should leave Lubavich at the onset of the German incursion into Russia, by WWI.

The Rebbe Rashab stated that he will be staying, but the family can go. The Rebbetzin said, she will not state an opinion if the Rebbe should go or stay. However, she is letting it be known, that the family will not be in two places. Wherever he husband, the Rebbe decides to be, that is where the family will be.

Hearing this, the Rebbe who proposed that the family go somewhere else, stated for the first time that he will leave Lubavitch. That is when they moved to Lubavitch.

A half year after her husband, the Rebbe Rashab’s histalkus, she heard that her son told the chassidim to find someone else to blow the shofar. Understanding the unspoken message that he is not willing to accept the nesius and become Rebbe, she told him, “My son, I only want to hear the Shofar from you!” Listening to his mother he blew the Shofar in shul for everyone to hear.

In addition to being constantly on the lookout for her husband’s frail health, The Rebbetzin lived through tumultuous years. She lived through the Russian Revolution as well as both World Wars.

When she was fifty-six they moved from Lubavitch to Rostov, then seven years later the family was forced to move to Leningrad. Three years after that, her son the Frierdiker Rebbe was arrested and then saved from being killed and allowed to move with his family to Riga, Latvia.

Seven years later the family once again moved, this time to Poland and then she endured the bombardment of Warsaw Poland for a few months until their miraculous escape back to Riga and then a few months later on the way to America.

During the bombardment, she stayed in Rabbi Bezpalov’s house. The chassidim mentioned that perhaps sheshould move to what they considered a more secure house. She replied, There is a Sefer Torah in this house, and it is safe here. Indeed she was correct, that house wasn’t bombed and the ‘safer’ one was.

By that time she was not well and had a nurse name attending to her the entire time. During her final few months she was bedridden, but nothing changed. The Rebbetzin was meticulous in her schedule of davening three times a day and saying Tehillim before and after Shacharis.

On the morning of Shabbos Yud Gimmel Shevat 5702 (1942), she mentioned that this Shabbos is Shabbos Shira and one should daven better than regularly. In middle of davening, when she came to the the prayer of Nishmas, she felt weak and asked for a cup of water. By the time her aide brought it, her holy soul departed.

After her petira people noticed many similarities between her petira and the petira of her mother-in-law Rebbetzin Rivka, who was niftar twenty-six years earlier on Yud Shevat.

At that time Rebbetzin Rivkah wasn’t feeling good and while she was davening she asked for a cup of water. By the time the attendant brought it she was niftar. Rebbetzin Shterna Sara then remarked, “If only by me.”

And indeed she too was in middle of davening and requested some water and while it was being brought she was niftar.

Furthermore, just like when her mother-in-law was niftar her son, the Rebbe Rashab was not in   Lubavitch, so too on the day of her petira, her son was not there, as he had traveled that week to Chicago.

The levaya was postponed until Monday, when her son the Rebbe was back in New York. Before the burial, the Rebbe gave Rabbi Kazarnovsky an envelope and instructed to place it in his mother’s hand. He then said, “If you would know what was written in it, you would have a whole new level of respect for her.”

After her petira, the Friediker Rebbe placed an emphasis on opening up Talmud Torah’s for girls and he called them Beis Sarah, (while the schools for girls were called Beis Rivkah, in memory of his Grandmother).

Dear reader, I heard many years ago that the Frierdiker Rebbe went to Chicago because he was considering moving to the center of America, however, after being there he decided to remain in New York.