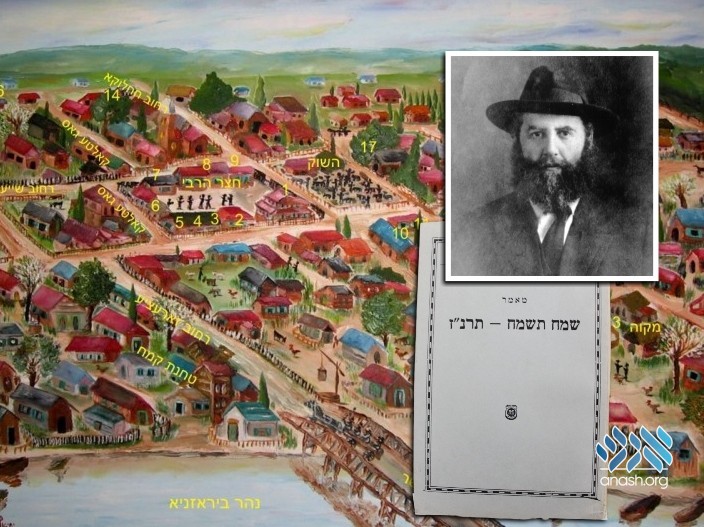 13 Elul is the anniversary of the Frierdiker Rebbe’s chassunah in 5657/1897. It was during the sheva brachos that the Tomchei Tmimim Yeshiva was founded.

When the time came for the Frierdiker Rebbe to be married, three prospective matches were offered. Two were the daughters of wealthy chassidim, and the other was Nechama Dina, daughter of Reb Avrohom Schneersohn of Kishinev. The Schneersohns of Kishinev were not wealthy, but the Rebbe Rashab chose that shidduch, because he wanted his son to marry within the family.

Reb Avrohom Schneersohn was the son of Reb Yisroel Noach of Nyezhin, son of the Tzemach Tzedek. The teno’im was signed on 28 Sivan 5656/1896, but due to the kallah’s young age, being only fifteen years old at the time, the wedding was delayed until the following year Elul. The city chosen for the wedding was Lubavitch, the home of the chosson and the Rabbeyim.

Yud-Gimmel Elul was on a Friday that year. As was the custom in many, if not most, Jewish homes, weddings would take on Friday, with the festive wedding meal combined with the Friday night meal. In this case, the meal took place after the chuppah. That morning, the Rebbe Rashab placed the shtreimel on the Frierdiker Rebbe’s head and told him to make the brochoh shehecheyonu.

After the chuppah, the chosson-kallah were led with much singing and dancing to the meal which took place in the big zal. During the meal, the Rebbe Rashab walked around with three chassidim and distributed mashkeh. The Rebbe poured each person l’chaim, and he said l’chaim with them. He also said the Ma’amar “Samach TeSamach.”

The couple lived in an apartment that was attached to the Rebbe Rashab’s house in Lubavitch.

Throughout the week, the Rebbe Rashab said ma’amorim at every sheva brochos meal. They were later compiled into the sefer “Ma’amar Samach TeSamach, 5657.”

On the 15th of Elul, during one of the sheva brochos, the Rebbe Rashab announced his plan to open a Yeshiva where the study of nigleh and Chassidus would be combined, which ultimately was named “Tomchei Tmimim.”

In the sicha of 13 Elul 5748/1988, the Rebbe mentioned that every year on this day the hashpa’a that happened on 13 Elul when the Frierdiker Rebbe got married happens every year just like it did then. Moreover, since ma’alin baKodesh, we ascend in holiness, the hashpa’a increases each year.