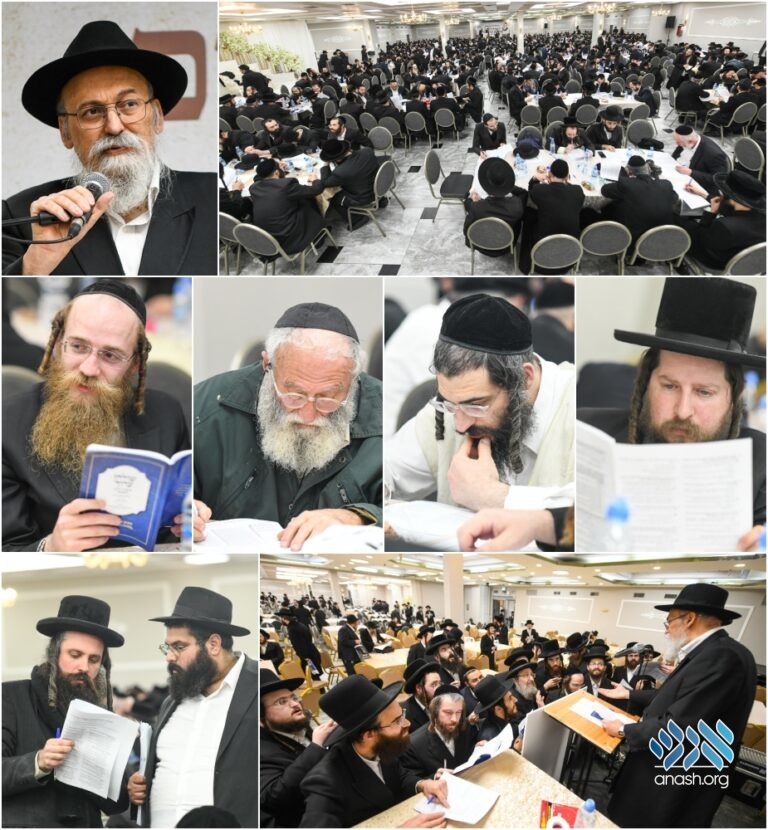 Men of all ages and from all walks of Yidishkeit gathered on Chof Daled Teves for an advanced test on the Alter Rebbe’s Shulchan Aruch, which they learned over the past months.

No less than 1,200 men gathered on Chof Daled Teves in Eretz Yisroel for an advanced test on the Alter Rebbe’s Shulchan Aruch.

“The halachos of netilas yodayim are among the most complicated in Shulchan Aruch Orach Chayim, especially in the Alter Rebbe’s Shulchan Aruch,” Rabbi Alashvili said. “I was, therefore, amazed to see the success of the participants, even more than previous times. To our delight, over 800 of the participants passed the test successfully. Many even got all 60 questions correct.”

The organizers noted two especially moving incidents during the test this year. The first involved a shliach from Milan. The shliach approached the organizers and told them that he had chanced upon the booklet they had published for the participants to study months ago, and became so excited about the idea that he decided to participate as well. He studied the material, and when the time for the test arrived, he flew in from Milan especially to take it.

The second was when the testers came across a test that had all the correct answers, but no name. They then saw what the participant had jotted. “In previous years I took the test for the monetary reward, but this time I decided to do it l’sheim shomayim…”

All participants received two newly published seforim as a gift, and the 800 who passed received stipends of between 500 and 1,000 shekel.