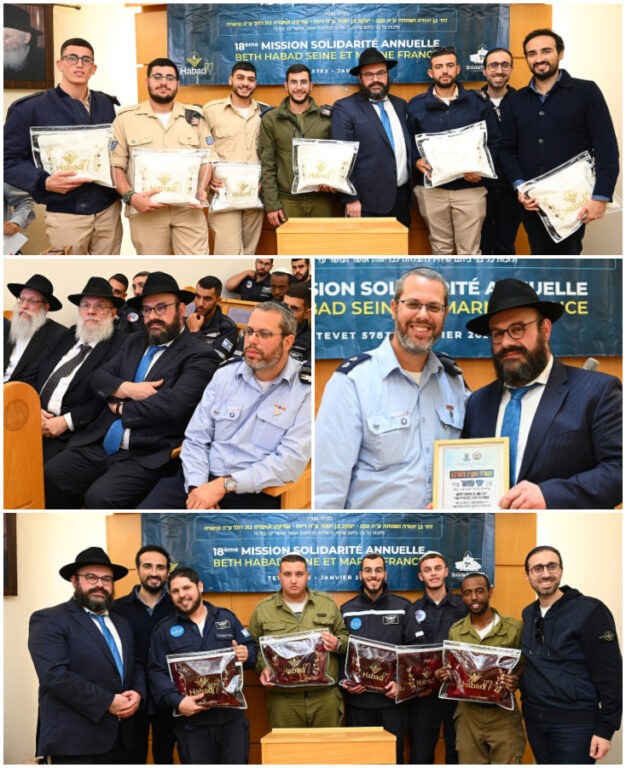 Chabad Seine et Marne in France ran its 18th solidarity mission in 16 years. The soldiers were treated to a large event with speakers, dancing, a lavish feast, and beautiful gifts such as tefillin, chitas and shabbos candle sticks.

Once again Chabad Seine et Marne, founded and directed by Rabbi Yossi and Tzalcha Amar, organized another solidarity mission. Rabbi and Mrs. Amar have been intimately involved with IDF soldiers and Israeli border Police by providing encouragement and support for over 16 years.

This year, two impressive grand ceremonies were held at two major IDF military bases, Palmachim and Gidonim, in honor of the Rebbe’s 120th birthday. A solemn ceremony, with speeches by the commander and leaders of the military bases, took place at both bases. The program was accompanied by dancing and a large catered meal for 150 soldiers. Following the meal, 120 soldiers were chosen by their commander to receive a Chitas for their safety and protection, a brand new pair of Tefillin, and beautiful silver candle sticks.

Rabbi Amar shared, “a very large number of soldiers do not own their own pair of Tefillin or have lost it. By receiving this gift, they each undertook to put them on at least once a week and, if possible, every day of the week.” Many of the soldiers were moved to tears when receiving these gifts by the showing of solidarity and love from Chabad Seine et Marne.

At the end of the program, Rabbi Amar, shared the remarks that one of the pilots and senior commanders of the Air Force, Lt. Col. Ran Ronen Packer shared after meeting with the Rebbe for two and a half hours.

“It has been argued that in the next war, soldiers will not only have the qualities that helped us win previous wars (courage, ingenuity, initiative, etc.), but we will need additional resources, especially in the spiritual and mental realm. The importance of increasing faith in the heart. It is important that fighters and young people believe in what they are doing and what they are fighting for.”

The Rebbe told him about the importance of keeping the mitzvos, at least putting on tefillin, and explained the reason for the mitzvah. Mr. Packer continued to write about his meeting with the Rebbe, “It was an impressive spiritual experience that can only be compared to the experience of flying on the F15, and it was interesting to spend a relatively considerable amount of time in the presence of a noble and certainly extraordinary personality. I was deeply impressed by his knowledge of different and diverse fields, including secular, and his natural and sincere sincerity”.

Rabbi Amar ended his speech by mentioning that it is currently the year of Hakhel and the importance of the year. He shared that this year we are asked to intensify our efforts in mitzvos and to bring yeshuah and shalom to the world.

Thank you to those that have already supported this mission by participating in the heavy financial cost of this operation. This mission, unique in its scope and meticulous organization, is still far from being fully funded.