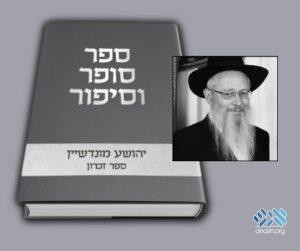 Ever since he was a young bochur, R’ Yehoshua Mondshine dedicated his life to the research of Chabad history, eventually becoming one of the most prominent Chassidic historians. A new memorial book documents his life and extensive writings.

Ever since he was a young bochur, R’ Yehoshua Mondshine dedicated his life to the research of Chabad History, eventually becoming one of the most prominent Chassidic historians. A new memorial book, published by his family, documents his life and extensive writings.

Throughout his life, Rabbi Mondshine authored over twenty works on Chabad history and customs, edited and compiled tens of others and published hundreds of articles in academic and rabbinic journals.

Following his passing in 5775, his family founded the Keramim Institute, to publish his writing and continue his unfinished projects. This week, seven years after his passing, Keramim released ‘Sefer Sofer V’Sipur’, a memorial book spanning 1,100 pages and documenting Rabbi Mondshine’s life and his many works.

The memorial book is divided into three sections, in line with the title. Sefer – the book, Sofer – the author, and Sipur – the story.

Sefer – the book: The huge amount of literary work written and published by R’ Yehoshua Mondshine testifies to his extraordinary productivity, making him one of the most prolific writers of the generation.

Sofer – the author: Close to three hundred personal letters by Rabbi Mondshine are printed in the second section of the book. These letters, which were never printed previously, were written to a wide range of prominent personalities, scholars and academics, discussing topics in Torah, Chassidus, history and many other topics as well.

Sipur – the story: The first section of the book tells the life story of Rabbi Mondshine and how we grew into one of the most prominent historians of Chassidic history of his day. The book also uncovers the story of the formation of his greatest works and his unique style in historical research.

The new book was edited by Rabbi Menachem Mendel Kastel, editor of the Heichal Menachem journal, and was published by the Mondshine family and the Keramim Institute. It is currently in stores in Eretz Yisroel, and will be available in the USA in the near future.