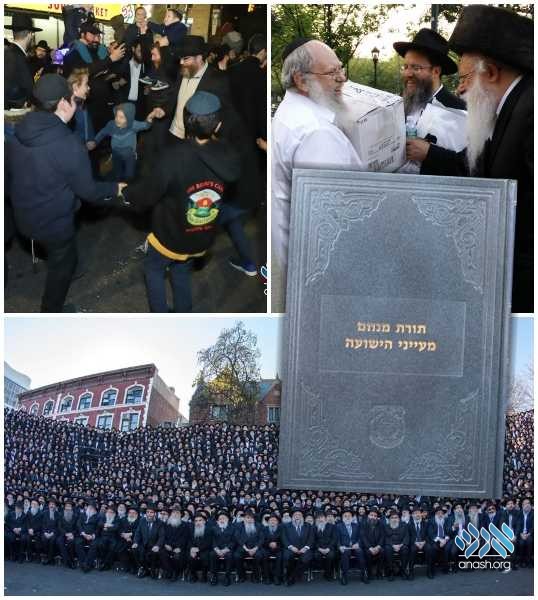 Over one thousand Shluchim in the United States received a unique gift from ‘Friends of Lahak Hanochos’ the brand new Sefer Mayanei Hayeshuah, and hundreds of Seforim were donated to Shuls in memory of R’ Pinchas Greenberg.

The most sought out sefer in Anash communities in recent weeks has been Toras Menachem Mayanei Hayeshuah, a phenomenal work weaving together all the Rebbe’s unique Simchas Beis Hashoevah Sichos, delivered each night of Sukkos from 5741 through 5752.

The sichos were collected and organized into one synthesized whole and set forth in an organized manner, with special chapters for each topic. Earlier versions of this Sefer were published in the later years of those Simchas Beis Hashoevah sichos, and — as per the testimony of the mazkirim — the Rebbe kept the volume on the table in his Sukkah at 770.

Lahak Hanochos decided to revisit the project this year, marking forty years since those first Sichos in 5741. The response, they say, has been gratifying. Over five thousand volumes were snatched off the shelves in Kehos and Judaica stores, and as of two days before Yom Tov, not a single volume of this first edition has remained.

A special campaign to preorder the book was made possible through the generosity of Rabbi Dovid Fischer, who marks his birthday during the Yom Tov of Sukkos.

Another special initiative was undertaken for Shluchim who were not able to purchase the Sefer in New York. Friends of Lahak ordered a total of one thousand books and dispatched them to the homes of Shluchim around the United States.

A stream of grateful feedback has been reaching Lahak’s offices ever since. One Shliach wrote back that the sight of the beautiful colored picture of the Rebbe — for the very first time in a sefer of sichos — gave him the feeling of support and encouragement that he so desperately needed during these difficult times.

A third initiative brought close to five hundred volumes to Shuls and Botei Midrash in the greater New York area and in Eretz Yisrael, made possible by friends of the unforgettable Pinchas Greenberg, who reached his final illness in the midst of a Simchas Beis Hashoevah farbrengen last year. Pinto, as he was belovedly known, was a symbol of joy and enthusiasm, spreading it contagiously with whomever he came into contact. Pinto was also a dedicated member of Lahak Hanochos from the day of its founding exactly forty years ago, and committed days and nights to publishing the Rebbe’s sichos in the most beautiful manner. May these seforim — and the countless hours of learning in them — be a monument to his blessed memory.