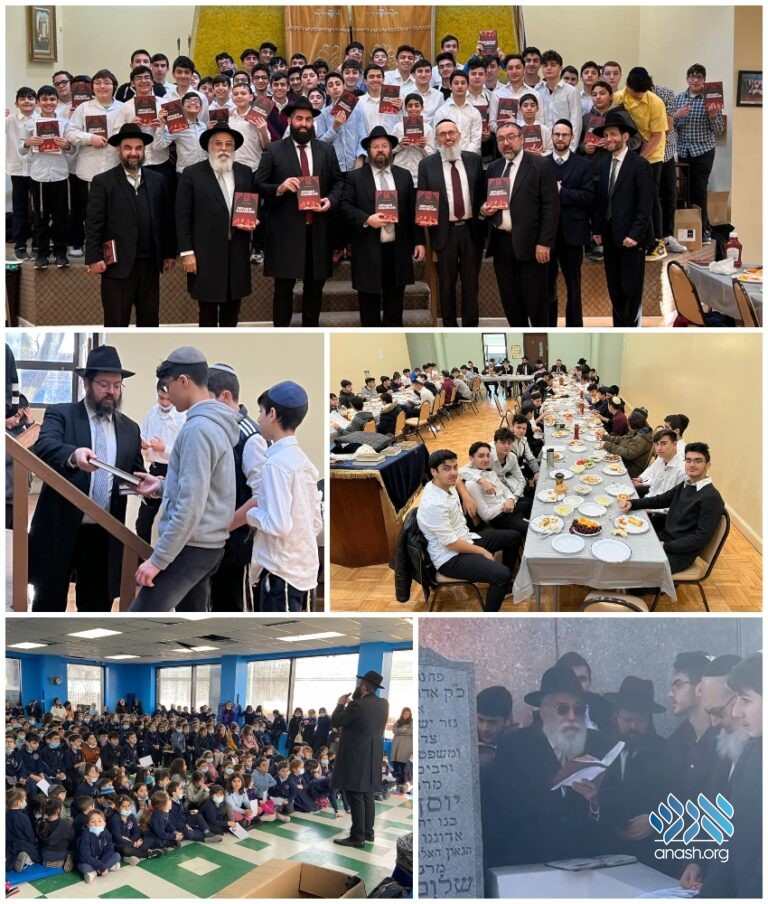 One thousand students at the Ohr Avner Schools in Queens marked Yud Shevat with davening at the Ohel and farbrengens where they heard about the love our Rebbeim showed for every Jewish child.

Yud Shevat this year, marking 72 years of the Rebbe’s leadership, was celebrated in a unique way at the Ohr Avner educational institutions in Queens, founded by businessman, philanthropist, and investor Mr. Levi Leviev, in creative ways. Nearly one thousand boys and girls learned about the leadership of Rebbe Rayatz and his successor, the Rebbe.

A meaningful shacharis was recited in the yeshiva building, at the Boy’s High School in Utopia, followed by a farbrengen with the educational staff led by the shluchim Rabbi Yitzchak Wolowik and Rabbi Asher Vaknin, where they shared words of Torah, stories about the Rebbe Rayatz’s self-sacrifice, and discussions about the Rebbe’s work and initiatives.

A special guest at the farbrengen, from New Haven, Connecticut, was Rabbi Eli Raskin, who shared insights about the lives of the Rebbe and the Rebbe Rayatz, translating it into contemporary language — showing how it could be relevant to the life of a young Jewish teenager in 2022.

Each student received a special memento from the occasion —  “Defiance in Samarkand,” a memoir of the self-sacrifice of the Chabad Chassidim in the Samarkand of his youth, the wonderful relationship they had with the local Bukharian community, and about the strong connection that was forged between the Bukharian community and the Chabad Rebbes.

In a moment of inspiration, it was decided that the students would make a group trip to Ohel. Indeed, last Friday, Erev Shabbos Beshalach—Shira, the students arrived at the Ohel with the entire faculty and the Shluchim, Rabbi Zalman Zvulunov, Rabbi Yitzchk Wolowik, Rabbi Shmuel Kagan and Rabbi Asher Vaknin. Before writing their personal panim, words of inspiration were delivered by the chief rabbi of the Bukharian Jewish community in the United States and Canada, Rabbi Baruch Babayev.

As they left the Ohel, one of the students approached the Shluchim with tears in his eyes and said, “The miracle stories, the inspiration, and especially the visit to the Ohel — this was an experience like no other, and it will remain with us for the rest of our lives.”

The students in the elementary school also prepared for Yud Shevat with a series of educational activities. On the day of Yud Shevat itself, they learned from the Rebbe’s teachings, gave charity, watched a video of the Rebbe, and held farbrengens in each class. Each student gave a personal gift to the Rebbe, in the form of a new resolution in their Torah and mitzvos observance.

At a general gathering with the students, Rabbi Raskin spoke about the special attention the Rebbe Rayatz and the Rebbe paid to the field of Jewish education, and about their love for every Jewish child being educated in the path of Judaism.

After reciting the twelve pesukim, each child handed their personal pan to Mrs. Batya Zevulunov, to be brought to the Ohel.

The students were given a special opportunity to share personal stories about miracles and experiences they had with blessings of Tzaddikim. The result was many new, inspirational resolutions in Torah and mitzvos. The girls also each received the book, “Samarkand,” with its message of devotion and self-sacrifice for Jewish life.