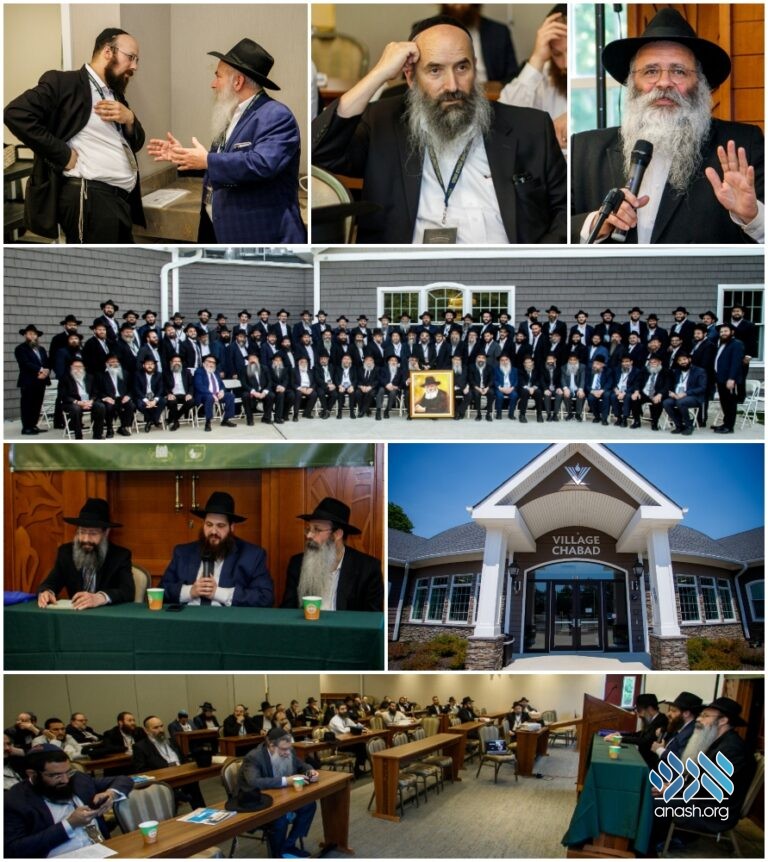 The first in-person gathering of Shluchim on the East Coast took place last week at the New York and New England Regional Kinus HaShluchim in Setauket, New York, with 100 shluchim gathering for a day of workshops, programs and farbrengens.

The Kinus opened with a generous brunch spread, Divrei Torah and opening remarks. It felt good to be together again.

A series of workshops organized by the Kinus Vaad and the hosting Shluchim touched on many important and relevant topics, uniquely catered to Shluchim in the New York and New England Region, including Connecticut, Maine, Massachusetts, New Hampshire, New York, Rhode Island and Vermont.

The first session, “The Path To Recovery”  addressed how to support community members coming out of isolation and how to bring people back to the Chabad House. The talks included “Offer College Credits”  Rabbi Shimon Rivkin of Brooklyn, NY; “DeZooming the People” by Rabbi Sholom Ber Cohen of Setauket, NY; “What Makes You Tick?” by Rabbi Shmuel Metzger of Manhattan, NY and “Cold Calling Opportunity” by Rabbi Mendy Teldon of Commack, NY.

The next session, titled “Public Relations: Navigating the Minefield of Anti Semitism And Understanding the Rebbe’s View” was presented by Rabbi Motti Seligson of Brooklyn, NY and Rabbi Mordy Dinerman of Brooklyn, NY.

Following a short intermission, the next part of the program was titled “The Chinuch of Our Children -Staying In Touch With Your Son’s Journey.” Treading the unfamiliar path of the Yeshiva system feels overwhelming for some parents, and knowledge is power. Expertly moderated by Rabbi Zev Wineberg of Long Island City, NY, presenters included Rabbi Noach Kosofsky of Longmeadow, MA, Rabbi Aaron Ginsburg of Brooklyn, NY and Rabbi Mendel Blau of Brooklyn, NY.

The final workshop was entitled “Practical Halacha” and moderated by Rabbi Levi Gurkov of Oceanside, NY. Rabbi Elchonon Zohn of Queens, NY addressed critical insights regarding chevra kadisha, and Rabbi Kalman Weinfeld, a member of the Executive Rabbinical Council at OK Kosher, presented an overview of the intricacies of Commercial Kosher.

The Shluchim were also addressed by a founding member of the Village Chabad community in Setauket, Mr. Emil Moshkovich.

Next, all the shluchim gathered outside the Chabad house to take the annual New York & New England Regional Kinus HaShluchim photo.

The formal program culminated with an upscale dinner banquet program chaired by Rabbi Motti Grossbaum of Setauket, NY. Rabbi Adam Stein of Stonybrook, NY led the crowd in a perek of Tehillim, and host Shliach, Rabbi Chaim Grossbaum opened the program. Rabbi Moshe Kotlarsky, Vice Chairman of the Merkos, inspired the Shluchim to strengthen their Hiskashrus by frequently writing to the Rebbe regarding Besuros Tovos.

“The palpable energy that we feel gathering in person once again is extremely refreshing; these Kinusim are essential to keep us focused on who we are as Shluchim and what our mission is,” said Rabbi Kotlarsky regarding the event.

The memorable keynote address was delivered by Rabbi Shais Taub of Cedarhurst, NY.

After the banquet,  Rabbi Yosef Chaim Kantor of Bangkok, Thailand, led the post-Kinus Farbrengen as Shluchim sat together and uplifted each other late into the night.