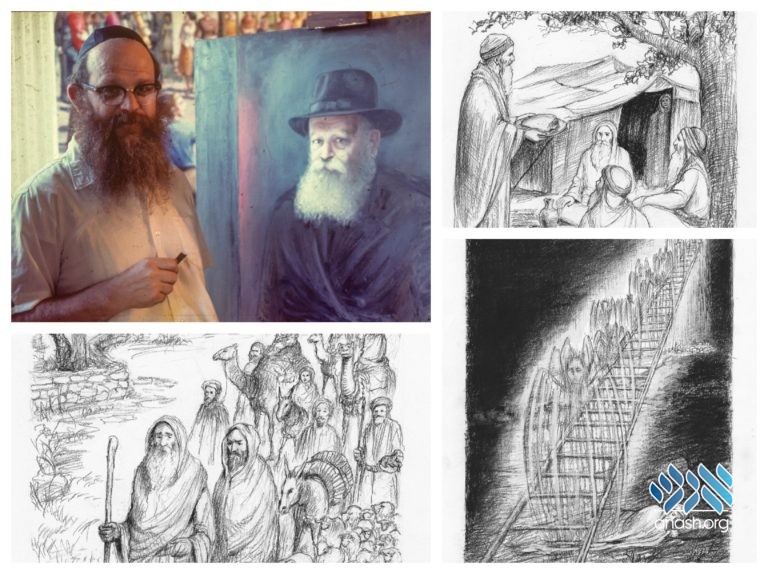 A series of drawings depicting scenes from Chumash Bereishis recently began making the rounds on social media. Drawn by famed chassidic artist Zalman Kleinman many moons ago, they are now being seen by the public for the first time.

The drawings were passed around with a message from the man who originally solicited them. “Some years ago I asked R. Zalman Kleinman to draw one picture per parasha.. my reasoning to him was that it doesn’t exist, from a chassidishe point of view, such drawings… So על מנת לזכות את הרבים I’m sharing those drawings for Chumash Bereshis,” the message reads.

After multiple attempts by the family, Reb Zalman’s grandson discovered that the message- and accompanying drawings- were sent by Rabbi Shmuel Osher Begun of S. Paulo, Brazil. In an exclusive interview with Anash.org, he shared the backstory of the precious drawings.

“I worked for many years as the menahel of Cheder Lubavitch in S. Paulo and had many projects in chinuch,” Rabbi Begun said. “One thing that we as mechanchim missed was a good drawing on the weekly parasha. There are some out there, but we felt the need for a chassidishe view.

“I hired Reb Zalman to make me one picture per parsha, for the purpose of lehagdil toiroh ulehaadiro. I paid him $150 for each picture; our mosdos, no matter where they are, need the best available resources out there! Unfortunately, he passed away after almost finishing Chumash Bereishis.”

“We did not know much about that project, though I do recognize some of the drawings,” Mrs. Kayza Zajac, daughter of the beloved painter and chossid told Anash.org.

Though Reb Zalman experimented with various techniques and artistic styles, he always tried to make the details of his paintings as realistic as possible. “It was an expression of his genuineness,” Mrs. Zajac said. “He had some work that was a more primitive style, but you could always see what he was trying to portray; it was very deliberate.”

Some of Reb Zalman’s most celebrated works portray scenes of holiness and chassidishe varmkeit. When painting these pictures, he made sure that his environment and frame of mind were aligned with what he was trying to depict.

“My father enjoyed a wide variety of music, but he was very sensitive to its soul,” Mrs. Zajac said. “When he was drawing chassidim or farbrengens, he would listen only to nigunim. He said that when painting, the music either works for you or against you, and he wanted it to work for him.”

Indeed, as Rabbi Begun lamented, pictures of scenes from Tanach that appropriately portray kedusha are hard to come by; unfortunately, Reb Zalman passed away before he could complete drawings for all of the parshiyos.

“My father liked for things to look nice, but he never felt the need to jazz them up, and he wasn’t apologetic if it didn’t meet current social standards,” Mrs. Zajac concluded. “He understood that a lot of things change, and you can’t always change with them.”