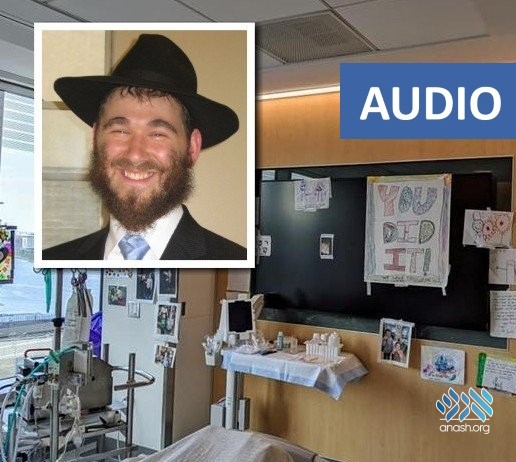 “Coming to you now, for the first time in four months…this is Yudi speaking.” Those were the words at the start of a short voice note that brought tears of joy to many worldwide.

“Coming to you now, for the first time in four months…this is Yudi speaking.”

A short voice note sent from a hospital bed brought tears of joy to thousands around the world who have been davening and saying Tehilim for Yudi Dukes for months.

Yudi, the director of JNet contracted coronavirus close to four months ago. After a week bedridden at home, when he could barely talk, he was hospitalized. His condition continued to deteriorate. After  his lungs collapsed, he was placed on an ECMO machine to provide respiratory support. Since then, people around the world have been davening and doing additional mitzvos for him.

In the recent weeks, his condition took a turn for the better, and he slowly began recovering, albeit at a slow pace. On Thursday, Yudi sent a short voice note from his hospital bed which quickly spread around social media.

“Coming to you now, for the first time in four months, you will not be disappointed, this is Yudi speaking,” began the 29 second voice note.

“Hang in there guys. I’m coming back,” he said.