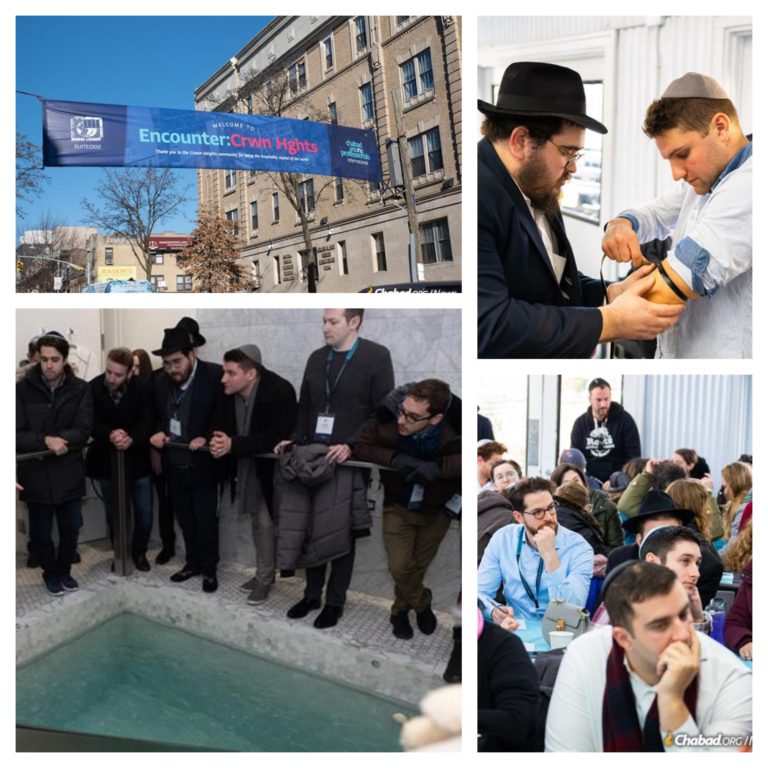 By Aharon Loschak for Chabad.org

Headlines around the world may be sounding the alarm on anti-Semitism, but this past weekend in one neighborhood of Brooklyn, N.Y., only Jewish pride and joy were on display.

Ask Chabad-Lubavitch Rabbi Getzy Markowitz of the Montreal Torah Center in Canada. Just a few months ago, his father-in-law made headlines as the victim of an anti-Semitic attack in Brooklyn, but last weekend, he was buoyantly walking the streets of his native Crown Heights with a large group of young Jewish adults in tow. They had come for the annual Chabad Young Professionals (CYP) Shabbaton, dubbed “Encounter: 2020.”

The second annual “Encounter,” which took place from Jan 17-19, offered hundreds of young Jews from around the world—from 46 different cities, many with comparatively little Jewish infrastructure—to experience life in a vibrant Chassidic community.

For the group from Quebec, all they experienced was warm hospitality, along with discovery and a heaping dose of Jewish pride.

Vanessa Ades is part of the young leadership board of the Family Store in Montreal, a subsidized supermarket mostly staffed by young Jewish volunteers drafted by Markowitz that provides a dignified shopping experience for needy families in the community. “I’ve heard so much about Crown Heights from Rabbi Getzy,” says Ades. “To see it firsthand, to see the incredible hospitality and the values so vigorously espoused in every home, it was truly inspiring.”

“The restaurants were a nice addition, too,” she quipped.

Jon Burzler, a member of the Springfield, Mass., Chabad Young Professionals group, agreed. He was particularly taken by the boutique experience he had Friday evening. Hearkening to the days back when he was in yeshivah, their group leader, Rabbi Lavy Kosofsky, took the opportunity to steal away for an impromptu learning session in the main study hall of Oholei Torah, a large yeshivah in Crown Heights. The consensus emerged that the lecturer they chose at random and cajoled into studying with them was the weekend’s best speaker—and he wasn’t even on the program.

“Nothing compares to seeing it at the source,” said Kosofsky. “We come from a smaller town, and coming to Crown Heights and seeing the pulsating Jewish life really leaves a lasting impression.”

And that was one of the aims of the program. Jenn Reisman hails from the storybook small town of Rockwall, Texas, and has become involved with the young Jewish community headed by Rabbi Eli Nochum and Tzivia Block in San Antonio. A pastry chef by profession, she didn’t think much of spending a weekend in Brooklyn until Tzivia encouraged it.

When asked about her impressions from the weekend, Reisman replied: “I’m going to try harder to find a Jewish husband and go to temple more often.”

A Buffet of Options

While the Chassidic community in Crown Heights is every bit the romantic shtetl visitors imagine it to be, it’s much more diverse than Sholom Aleichem’s Anatevka. That diversity was on display on Friday afternoon, as the schedule boasted various behind-the-scenes tours for the weekend visitors to explore: There was one option for the culinarily inclined, and another track to meet the leaders behind the local organizations, small businesses and global enterprises. Still another group toured galleries and studios, while others got an up-close look at a Torah scribe, a shmurah matzah bakery and a state-of-the-art mikvah.

One special experience for the Montreal group was the chance to reach back in time and take a peek into the old world of Chabad in Russia at the home of Markowitz’s grandparents, Reb Michel and Danya Raskin, longtime residents of Crown Heights and both originally from Soviet Russia.

It was particularly meaningful for them, as many in the group took part in the CYP Ambassadors Trip to Russia this past summer, a journey into Chabad’s roots and its explosive impact in the years since the collapse of the former Soviet Union. After spending an immersive 10 days in the Chassidic motherland, the visit to the Raskin’s wood-paneled dining room was a coming home of sorts.

“Most people I know don’t have religious grandparents, and they certainly don’t have a strong relationship with the past,” said Simona Trembitzky of the Brooklyn chapter of Chabad Young Professionals, who participated in the Russia trip. “To talk to such living history, and see how the values and traditions of the past are so vibrant and real in the present, with so many grandchildren and great-grandchildren carrying it on, was a true privilege.”

She added that “As young entrepreneurs, we’re always looking to emulate successful people and find their ‘secret sauce.’ Well, here’s a real success story, a couple with a beautiful family and strong traditions. The secret sauce must be their incredible connection to the Rebbe [Rabbi Menachem M. Schneerson, of righteous memory]. That’s something I want to emulate.”

As the afternoon went on, participants got the opportunity to see the personal study of the Rebbe in the central Chabad synagogue at 770 Eastern Parkway, where thousands would flock to seek guidance, blessing and comfort.

The sun dipped below the horizon and Shabbat settled in. Groups of young adults could be seen bustling along the sweeping expanse of Eastern Parkway as they made their way to the opening session of “Holy Hour, Happy Hour”—a chance to mingle with other like-minded professionals, followed by a lively Kabbalat Shabbat.

Participants then branched out Friday evening to individual homes for a traditional Friday-night meal.

“I have never met Rabbi Getzy’s brother before, yet from the moment I walked in, I felt as if I was family, completely at home,” related Ades.

Participants were regaled with classes and Chassidic farbrengens into the night. The studying continued the following day, with roundtable discussion on topics ranging from, “How to Integrate Your Jewish Identity Into Your Everyday Life” with Paul Hamburger, a successful Washington, D.C.-area attorney, to “You = Soul + Soul Mate” with renowned lecturer and author Rabbi Shais Taub.

The program climaxed with a gala Havdalah party in Area 53, a chic venue in the swanky DUMBO neighborhood, giving them a taste of another slice of Brooklyn.

‘Light Up the World’

One of the most meaningful parts of the trip took place on Sunday morning, as everyone made their way to the Ohel—the resting place of the Rebbe, the inspiration behind CYP—in Queens, N.Y.

“I’ve been to the Ohel many times, but never like this,” said Tamara Schoor of Brooklyn. “It was very special to be together with a group of people who are finding their G‑dly spark within. I’ve been fascinated by the Rebbe for several years now, and what I find most impressive and beautiful is that the Rebbe created a whole community of leaders. The lesson I keep learning is to keep my eyes open for those G‑dly sparks—not to just learn and keep them for myself, but to share them with those around me so that together we can light up the world.”

The scene of one young professional helping his friend put on tefillin in the corner of the room as the other announced his decision to pray three times a day only amplified the message: These young Jews are inspired by their Judaism, and they’re ready to bring it with them wherever they go.